The Queue: Back from the dead 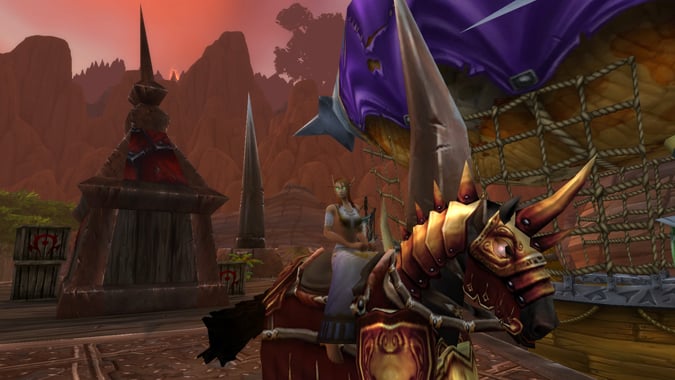 The longer I went without her, the more I kind of regretted deleting my paladin back at the end of Wrath of the Lich King. I mean sure, plate wasn’t really my style, but she had some achievements and gear that I couldn’t get anymore. The game couldn’t find her for me to un-delete on my own, but a helpful GM brought her back.

She’s wearing a Noblegarden dress because she literally has nothing else to wear. So begins my paladining. Uh, onward I guess?

Q4tQ: Is there any canon explanation as how we get back from Draenor? Did someone manage to make the Dark Portal work again or do we slowly go back using Mage portals?

It’s pretty much Mage portals. I believe someone mentioned that when we first arrived, we didn’t have them — somewhere during our stay on Draenor, the Mages figured out how to make it all work and re-open the connection to our Azeroth.

That’s an excellent question — and it’s one we don’t know the answer to. Given that Karazhan has a history of showing people glimpses of other periods of history, I think it’d be safe to assume that it’s been that way for a long time. Those cracks showed events that had long since passed or had yet to occur, like when Khadgar witnessed Aegwynn’s confrontation with the avatar of Sargeras, or when Garona saw herself kill King Llane long before she actually did so. They might have actually been little pieces leaking through the Twisting Nether.

I imagine the actual Netherspace that we see in Burning Crusade wasn’t originally part of the tower. It probably developed at some point after Medivh’s defeat. Keep in mind that that’s just a guess, but it wasn’t mentioned in The Last Guardian at all.

Q4TQ: Really need advice on this one as a returning player for legion. Can I only collect old transmog via tokens where I used to be able to buy them with gold? I role play more than raid and can’t for the life of me do pvp. There must be another way to collect old appearances. Thanks all.

Q4tQ: What was the called that gives you back the “old” character template, with all relevant stats and not just the scaled down version we have post 7.0? Is there even such an addon?

I believe you’re looking for DejaCharacterStats — it fills in all those old details they stripped away. Whether or not we really need to see what those stats are is debatable, but hey! At least there’s an addon to give you all of that tasty information back again.

Q4TQ: What order do you guys think the Khadgar pre-patch materials line up in? I’m fairly certain that it goes Tomb of Sargeras straight to the teaser trailer where he warns Stormwind of the Legions return then some time afterwards into his Harbringers which seems to lead into pre-patch events I won’t spoil.

I just updated the recommended reading list for Legion yesterday, and I included a chronological version of all Legion-related lore releases. You can check that out right over here.

Lore Q4tQ: In The Tomb of Sargeras: The Fate of Another, Kil’jaedan tells Gul’dan that his alternate self failed the Legion. When asked about the manner of said failing, he responds with “disloyalty”. We also know that demons residing within the Tomb ripped Gul’dan apart in our timeline… so my question is: Wasn’t Gul’dan operating on behalf of the Legion? Why did the demons aligned with the same Legion prevent him from opening the way for the Legion before? And how the hell was he disloyal? Is there a part of this story I am missing?

Gul’dan was operating on behalf of the Legion. His task was to bring the Horde to Azeroth and use it to conquer the world. Sargeras — working through Medivh — promised Gul’dan a heck of a lot of power if he successfully carried this out. But Gul’dan got a little greedy. When it was apparent that Medivh was in danger, he spied on Medivh’s mind just before his death, and managed to pry out the location of that power. Of course the backlash from Medivh’s death threw Gul’dan into a coma — and when he awoke, he discovered that the Horde he’d carefully put together had completely changed.

Blackhand had been overthrown, Orgrim Doomhammer was in charge, and the majority of the Shadow Council had been wiped out. Instead of secretly running the Horde from behind the scenes, Gul’dan was basically forced to work for Orgrim. And he hated it. He was supposed to be in a position of power, and that position had been taken away. Yes, Doomhammer was still working on the main plan — wipe out humanity and conquer the world — but Gul’dan wasn’t the one in charge anymore.

So when the opportunity arose, Gul’dan deserted Orgrim and the rest of the Horde, and traveled to the location he’d seen just before Medivh died. He went to the Broken Isles to go take the power that was, in his mind, rightfully his — to claim the reward that had been promised him even though his task had never been completed. And because Gul’dan left and took his allies with him, Orgrim and the Horde ended up losing the Second War. They failed in their task to conquer Azeroth — which meant that Gul’dan failed his task.

Basically, Gul’dan assumed since Sargeras/Medivh was dead, the power that had been promised him was up for grabs, and he didn’t have to answer to the Legion anymore. He chose…poorly. And the Legion let him know it the second he stepped in the Tomb of Sargeras.