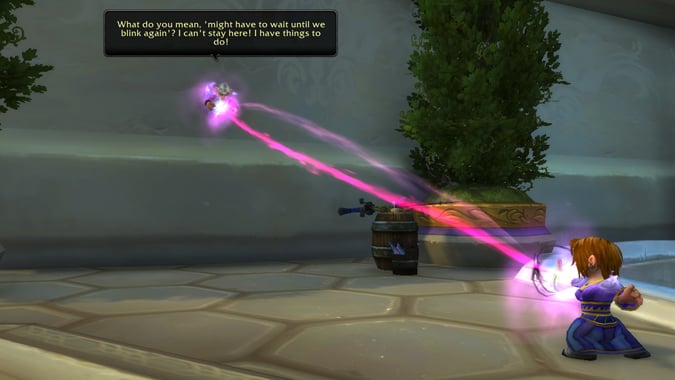 Moving a giant magical city in the sky is a dangerous prospect. If you head to Karazhan right now, you’ll find Dalaran floating above the tower, and all kinds of evidence to support my statement. Why Karazhan, you might ask? Well I don’t know — but I bet if you ask the various NPCs scattered around the city you might begin to get an idea!

Speaking of dangerous, this Queue contains some spoilers for Broken Shore content. If you haven’t done the Broken Shore scenario…it’s the weekend, go get it done!

What does everyone feel about Jaina’s position with Andiuin? Is she leader of the Kirin Tor still or is it Khadgar?

Currently in game, she still leads the Kirin Tor. Her position with Anduin is kind of interesting, really. She’s the one that taught him about diplomacy, about the potential for peace with the Horde. She’s the one who introduced him to Baine back in Cataclysm. And she’s lost her faith in what she believed in — rightfully so, after what happened to Theramore. In War Crimes, she seemed to be making a turn for the better — but what happened at the Broken Shore just reinforced her opinion of the Horde after Theramore. I’m hoping they don’t shovel her off to the side for the entirety of this expansion, because if anyone needs some story TLC, it’s Jaina.

Does anyone know if it’s possible to disable the pop-up windows of NPCs blabbering away we get during invasions?

That is a new feature added for Legion, and as far as I know (and I’ve looked), there’s no way to disable it. You’ll see it happen periodically while you’re leveling in the Broken Shore — personally, I like it because it means I’m not going to inadvertently miss any story dialogue popping up in my chat window. Plus, having things fully voiced is pretty cool. Whether or not I’ll be sick of it by the end of the expansion has yet to be determined!

Does anyone else (other than me and perhaps Vol’jin) think there may be more in store for the old warchief?  He says the wound will “take his soul”.  Arthas took Sylvanas’ soul, remember?  Turned her into a banshee.  Couldn’t they do the same with Vol’jin?

I don’t want to quote the dead parrot Monty Python sketch at you, so I’ll just say this: He’s gone. If we see him come back in any fashion, it’ll be as a spirit.

On the topic of spoilers, do you guys think it’s neat that Blizzard opened up the story like this before the expansion officially starts? Not only early, but for all players and not just folks who bought the expansion?

Absolutely! This is probably my favorite pre-expansion event to date. We’re not just getting lead-in lore for the next expansion, we’re getting some really powerful story here, stuff that’s going to shape the expansion, and what comes after it’s all over. And for people wondering if Legion is going to be worth buying…well. If they’re going to hit us with this kind of story in a pre-expansion event, what exactly have they got up their sleeves for the rest of the expansion? It’s going to be amazing.

Q4tQ: I understand that Anduin is next in line to lead the Humans, but I was surprised that all the Alliance leaders were quick to bend a knee to him as High King of the Alliance.  He’s still little more than a boy and doesn’t have a ton of experience.  Wouldn’t Tyrande or Genn be a better leader for the Alliance, especially right now with a huge demon invading?  Tyrande has direct experience with this.  She’s been through it.  Why not pick her?

If I’m remembering the event correctly, not once is Anduin referred to as the High King of the Alliance. They do call him “my King,” but come on. The kid’s just lost his father. He needs their support. As for Tyrande and Genn — Anduin is well aware of their abilities, which is why we’ll see them in action in Legion. I haven’t finished playing through everything on the beta, but I can tell you that Anduin isn’t a huge presence out there at the moment — the people that know how to handle this kind of situation, however, are down there on the front lines duking it out.

At the height of their respective power, who would win in a fight, Malfurion or Illidan?

I would not want to be around for that battle, because it has the potential to just rip the world apart. But my money’s on Illidan over Malfurion. Malfurion is in touch with nature and all that encompasses, but Illidan has tapped into the power of the Burning Legion. He’s using it as a weapon against them, sure, but he’s immensely powerful as a result of what he’s done over the course of his life.

However, I don’t think we’d be seeing that kind of battle come to pass, not unless Malfurion does something really stupid and picks a fight. Illidan has much, much bigger fish to fry, and Malfurion is just an afterthought in all of that.