Your Artifact is defining part of your entire Legion experience.  It starts off as an ilevel 750 weapon, but you’ll upgrade it from there by adding Relics to boost ilevel and Traits to increase its overall power. You will need the Artifact for each spec you intend to play, not only because Artifacts are the only powerful weapons you’ll find in Legion, but also Artifact Traits are a serious boost for your spec’s abilities.

Whether you’re just jumping into Legion or trying to give an alt’s Artifact (or Artifacts) up to par, we’ll walk you through how through how to get Artifacts, how to upgrade them, where to find Relics, and how to catch up on Artifact Power.

Update: This article was originally published way back in the Legion beta, but it’s been updated with the latest catch-up mechanisms and more.

Picking up your first Artifact

This one’s easy, because you’ll get a quest to hunt for your initial artifact as soon as you arrive in Dalaran on the Broken Isles. This is the longest quest of the bunch, as you’ll go through a chain to unlock your Class Order Hall before choosing which Artifact you want to grab first. You’ll be stuck with just the one Artifact until level 102, and while it doesn’t take too much time to reach it, be sure you pick a spec that won’t make you miserable for the next two levels.

It’s hard to say how much time these quests will take you, because each spec’s quest is different, but expect anywhere from 20 minutes to an hour to get through them. From there,  you then proceed to head out into the world, do what you do best, and fulfill your density … err… I mean destiny.  This culminates with a short scenario and by the end of it, you are wielding your weapon of legend. Each scenario reflects the spec for the weapon you are pursuing: healer Artifact scenarios have you healing a party, tank Artifact scenarios have you tanking something, and DPS Artifact scenarios make you hit it very hard.

However, you’re not required to complete scenarios using the appropriate spec — and we’ve heard a lot of success stories of players using their main spec to get off spec Artifacts. For example, you could complete a healing scenario in your DPS spec by going all out and killing everything before the party dies, reminiscent of the You’re Doing It Wrong achievement from Proving Grounds. 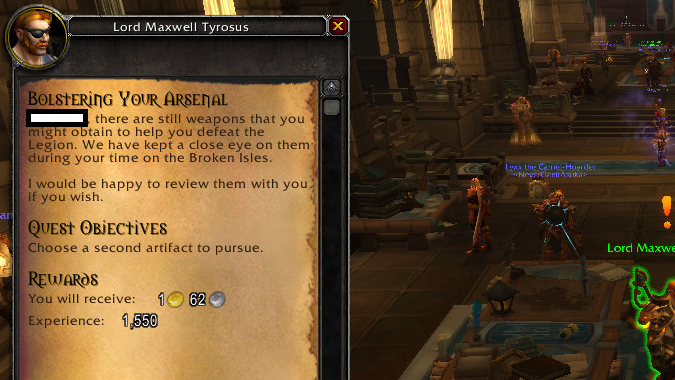 Getting your second (and third) Artifact

When you hit level 102, a quest opens up in your Class Order Hall. There’s no breadcrumb quest to lead you there, although in the course of normal leveling you’re going to be back there from time to time for other quests and to work on your Order Hall research. The key is to look for an NPC with an orange exclamation point. But the quest chains for additional Artifacts is shorter than the first. You skip the quests leading up to your initial artifact chain and the final scenario where you open your class hall — you’ve already done that once and don’t need to repeat it! 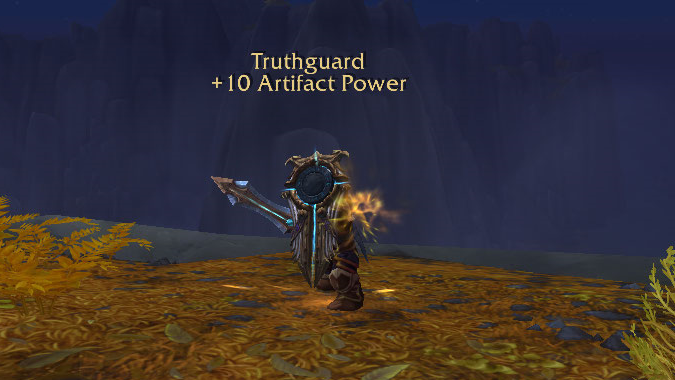 But getting your Artifact (or Artifacts) is only the first step. Powering it up requires Artifact Power (AP), which kind of like a currency: you spend to open up traits of your Artifact. Like the talent trees of old, you have to put ranks into the lower traits to open up the higher ones. Some traits are simple, direct increases to one of your spells while others are new active abilities. At the top of each tree are three powerful Gold Traits. Your best bet will be to choose one of the Gold Traits to pursue and then buy up the minor Traits that get you there.

You get the first Trait on each Artifact as a freebie, but you’ll have to go to the Artifact forge to open it — for the first Artifact, the quest walks you through this, but nothing tells you to do this for the next Artifact. Your first expenditure of AP will be for the first rank of the next trait which costs 325 AP. The next rank costs 375 AP and so on up the leveling curve we go. 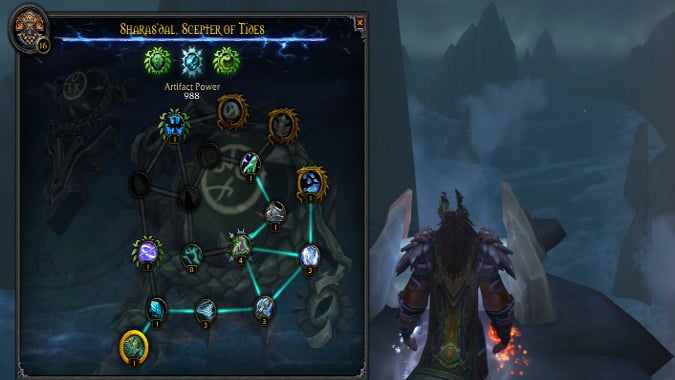 Artifact Power comes from many sources including PVP, quest rewards, running random dungeons, random world drops from mobs or treasures, Order Hall missions, and World Quests. Artifact Power items, like the Brief History of the Aeons, are Bind on Pickup consumable items that award as little as 10 AP up to 300 or more AP. When you use the item, the AP applies to your currently equipped Artifact. If you are out questing as Retribution with Ashbringer but you want your AP going into Truthguard for tanking, you have to equip Truthguard first, and then use the item.

By the time I was level 102 and got the quest for the second Artifact, I had accumulated a stash of items worth 625 Artifact Power, good enough to open up two ranks on one trait. As you level — and Traits get increasingly expensive — you’ll find it easier to collect AP to boost your off-specs. (More on this when we get into Artifact Knowledge below.)

With Bonus Armor and Spirit gone and primary stats removed from cloaks, necks, and rings, more gear than ever will work for both of your specs (though you’ll still want trinkets specific to each spec). In Legion, Artifact Power has become the catalyst that empowers each spec. Each Artifact has separate AP and the UI provides a helpful bar to fill up that updates depending on which Artifact you have equipped.

Already finished the out your Trait tree? In patch 7.2, there will be all new Traits to pick up, so you’ll be hunting for AP anew. 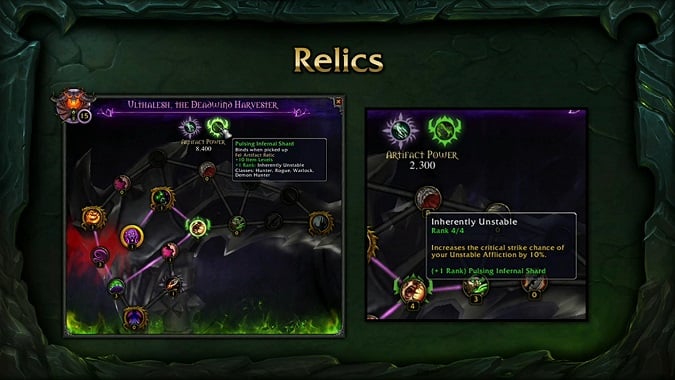 Up your Artifact’s ilevel with Relics

Artifacts are further enhanced by Relics like Rite the Val’kyr, a quest reward in Stormheim. Each Relic boosts your Artifact’s ilevel by a certain amount and gives you an extra rank in one trait. (And if you’ve already maxed out that trait, you get a bonus point.) These are similar to gems: you socket them into your Artifact, and if you already have a Relic in the slot you mean to use, it’s destroyed in the upgrade process.

You start out with two Relic slots, with a third that unlocks when you complete your Class Order campaign. Each slot corresponds to a particular school of magic: Arcane, Blood, Fel, Fire, Frost, Holy, Iron, Life, Shadow, and Storm. Like gems, you can only match the right type of Relic to the right type of slot, and each Artifact takes different Relic types.

Relics can be crafted or found as quest rewards (including World Quests at max level) and drops from bosses. Most are Bind on Pickup, but some are Bind on Equip and can be found on the Auction House — which is useful if you’ve been unlucky with drops while trying to get a full set of Relics for an off-spec artifact.

Typically, when you’re deciding which Relics to use, you’ll want to go by the highest ilevel. An ilevel boost is likely to provide more in stats and DPS than an extra Trait rank, so unless you’re comparing equal level Relics, you’re probably not paying attention to the Trait at all. 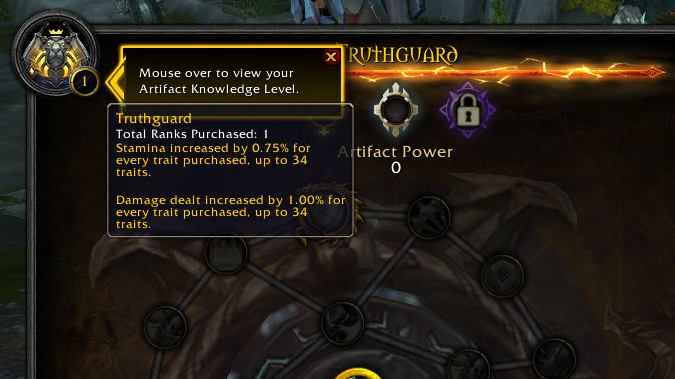 A catch up mechanism called Artifact Knowledge (AK), which acts as a multiplier for your Artifact Power. Each Rank of AK makes any Artifact Power items you collect on your character reward more AP, regardless of spec. Collecting AK makes it feasible to level up multiple Artifacts — or even just level your primary Artifact as Trait costs balloon.

You can start collecting AK at level 110, when you’ll get a quest to research for Artifact Knowledge via a Work Order. You can research two orders at a time: each costs 500 Order Resources and takes 5 days. When the research is finished, you’ll collect Artifact Research Notes, an item you have to use before it increases your AK up to 25 levels. At maximum level, you’ll get 24,000% extra AP from each AP item, which definitely helps you pick up those last traits. Note: If you have research ready, go grab it before you head out to quest! Artifact Power items give you a set amount of power based on the Artifact Knowledge you have when you get them.

But for faster advancement, patch 7.1.5 introduced a new catch-up mechanism that lets you get to AK level 15 instantly… as long as you have enough resources. You’ll want to talk to whomever in your class hall does Artifact research and buy an Artifact Research Synopsis. Each costs 500 resources, and you can get to AK 15 immediately on hitting 110 if you happen to have 7500 resources banked. 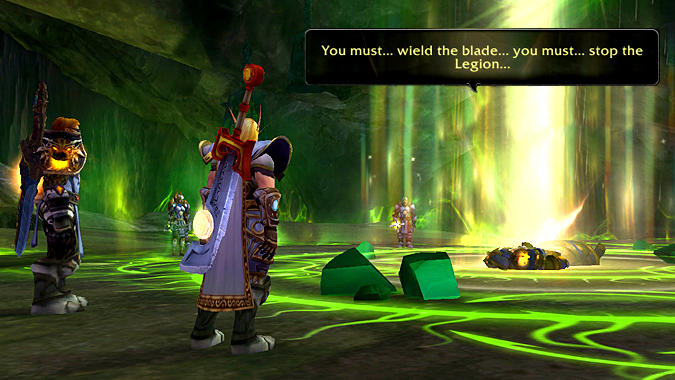 Playing catch up with alts

Unfortunately, Artifact Knowledge isn’t account wide: it just applies to the character you collect it with. That means leveling alts’ Artifacts can still be pretty painful. However, if you have one character with a stockpile of AK, a catch-up mechanism was added in patch 7.1.5. New Artifact Research Compendiums can be purchased in your Order Hall for 1000 resources each. They can then be sent to alts to provide an immediate boost up to AK level 20 (depending on the AK of the character who buys the compendium).  There are four compendium levels available, which can only be used by level 110 characters:

Sure, this won’t get your Artifact Knowledge maxed out immediately, but it certainly gives you a good boost.