This one line from Genn Greymane as I ran the Broken Shore has stuck with me ever since I heard it. What did he even mean? Does barely participating in the Second War really count as having ‘fought the Legion’? And his nation hid behind a wall during the Third War, so it’s not like he fought much then, either. But in a more figurative sense, all of Azeroth has fought the Legion — the First War was caused by Sargeras bringing the Horde through the Dark Portal to use as tools of destruction, and the Third War was a direct Legion invasion.

Yet just as clearly, this time the Legion is fighting very differently. With the portal in the Tomb of Sargeras wide open, the Legion can bring its forces through in waves, and establish whole city-like structures in a matter of moments. We’ve seen their vast floating ships dropping infernals onto our world, seen their forces materialize seemingly from nowhere.

What are we dealing with? If this isn’t the Legion we’ve fought before, what is it, and how does it differ? Was Genn more right than even he knew?

This Tinfoil Hat Edition of KYL is speculation based on what’s been revealed so far in Legion, and contains spoilers for that expansion. 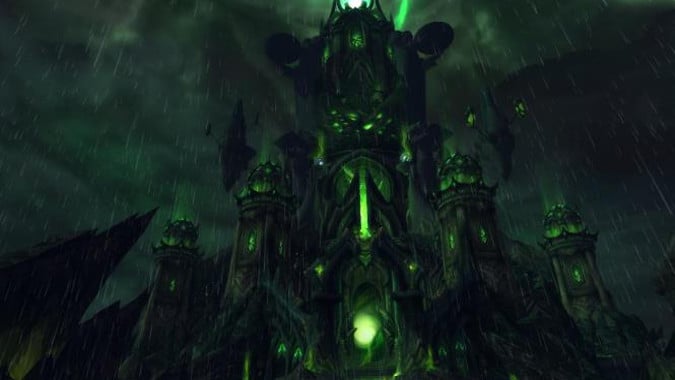 The lies the Legion tells

The first thing that really got me thinking about this was when, in the Horde side of the Broken Shore, Vol’jin said the same thing as Genn: that this wasn’t the same Legion. Now, I could take both to be speaking figuratively. They’re just shocked at the speed by which the Legion assembled its forces on the Broken Shore, that by the time the Horde and Alliance showed up to fight they were dealing with an army many times larger than they expected. But let’s consider. What if this isn’t the Legion we’ve fought before? What would that even mean?

One thing we’re told is that demons’ souls are tied to the Twisting Nether. That they exist across all timeways — so the Archimonde we fought on an alternate Draenor 30 years or so in the past is the same Archimonde we fought on Mount Hyjal 16 or so years ago. The Mannoroth we saw die to the Grom Hellscream of that past Draenor is the same one we then saw die to our own Grom Hellscream nearly 20 years later. This is a real problem for me and always has been.

If the Archimonde we beat on Draenor (and got our nice mooses from) is the same Archimonde from Hyjal, he should have been prepared for us. He should have taken us far more seriously, because he’d fought us before. When you consider Mannoroth, things get even weirder, because while he was being refused by Grom on the alternate Draenor, on the Draenor that became Outland at the exact same time he was being taken up on his offer. If both Mannoroths are the same being, how does he reconcile this? 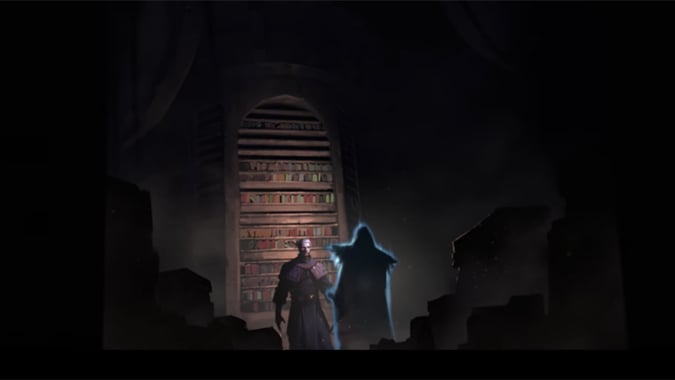 Untouched by time, detached from fate

One possibility is this. The Legion exists in the Nether, divorced from all timeways or timelines. I’m going to bring up Prince Malchezaar’s famous statement: “All realities, all dimensions are open to me!” Think about where and when he said that. It was Karazhan, a known ley-line nexus famed for its ability to alter one’s perception of time to the point where Moroes wore blinders to keep time visions from haunting him. What if there’s a significance to this?

In the warm-up to Legion, we’re given a quest to assist Khadgar that ends up in Karazhan. In it, Khadgar says that something has disturbed the wards he put up in Karazhan. But Khadgar helped us get a key to get into Karazhan in the first place, back when we encountered Malchezaar. How is this possible? Well, simple. When we first asked for Khadgar’s old key he ended up sending us on a quest that led us to the Black Morass at the point when Medivh was opening the Dark Portal to allow the Horde through. Yet, when we speak to him, he’s urbane, not at all surprised to see us, and give us his own key. Medivh straight up tells you he remembers future events and when you return to Khadgar in Shattrath City he says “I do not sense any disturbances in our timeline, so I suppose it was meant to occur all along.” 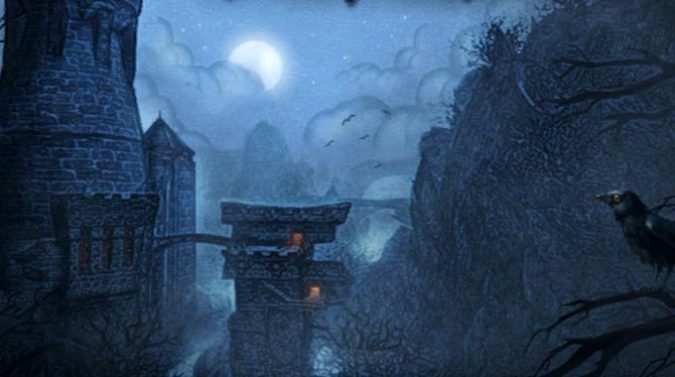 That brings up a whole host of questions. First off, is Khadgar the go-to authority on time distortions now? What about the Bronze Dragonflight? I seem to think Nozdormu might have been a better choice to ask about that. For that matter, we were already brazenly traveling through time in the first place just to get the key to a tower that alters the flow and perception of time. And once we were there, we fought our way to the top and defeated an Eredar Lord who claimed that all realities, all dimensions were open to him. Then, after we did that, Khadgar seems utterly to have forgotten that it ever happened, to the point where he tells you about wards he placed on the tower that weren’t there when you went upstairs (after using the key you got from Medivh decades in the past, while he was still under Sargeras’ control) and defeated said Eredar at the top of the tower, where it had breached into another plane of existence.

Just thinking about all the ways this could be wrong makes me want to chuckle.

The keys to the kingdom

So let’s put this jigsaw all together. The Legion exists outside of our reality, linked to the Twisting Nether so that when one of them dies, his soul returns to be reborn in said dimension. The Nether exists outside of space. Perhaps it also exists outside of time. The reason that Archimonde didn’t realize he’d fought us before when he attacked Mount Hyjal was because he hadn’t — the Legion doesn’t have the ability to travel in time or timeways, because Sargeras wasn’t the Titan with power over that sort of thing — Aman’Thul was. Aman’thul empowered Nozdormu to keep the timeways clear and secure.

Unto you is charged the great task of keeping the purity of time. Know that there is only one true timeline, though there are those who would have it otherwise. You must protect it. Without the truth of time as it is meant to unfold, more will be lost than you can possibly imagine. The fabric of reality will unravel. It is a heavy task — the base of all tasks of this world, for nothing can transpire without time.

When Malchezaar went to Karazhan, was he there because the tower allowed him to access all dimensions, all realities, even the alternate timeways policed by Nozdormu? Before the Hour of Twilight when Nozdormu gave up his power to make sure Deathwing would be defeated in all realities, the Eredar might not have been able to affect anything outside of Karazhan itself. And by defeating Malchezaar we effectively created a self contained time paradox, one that Medivh would have seen coming — indeed, he may well have wanted it to happen. Why else would he give us the key to Karazhan? By defeating Malchezaar, we erased his presence from the tower, but he was the whole reason we were there in the first place.

Now think about our visit to Draenor. When Nozdormu was still the Aspect of Time, a timeway like the Draenor we visited wouldn’t have been allowed to intersect with our reality. It would not have been open to us. And worse, we traveled there via the Dark Portal, a massive magical gateway created originally by Sargeras. Remember, when Medivh opened the Dark Portal to allow Gul’dan and the Horde through, he was doing so because Sargeras was controlling him. When we got the key to Karazhan from Medivh, we did so by time traveling back to the point in history when Medivh was opening that portal, and thus was still controlled by Sargeras.

Sargeras gave us the key to Karazhan. 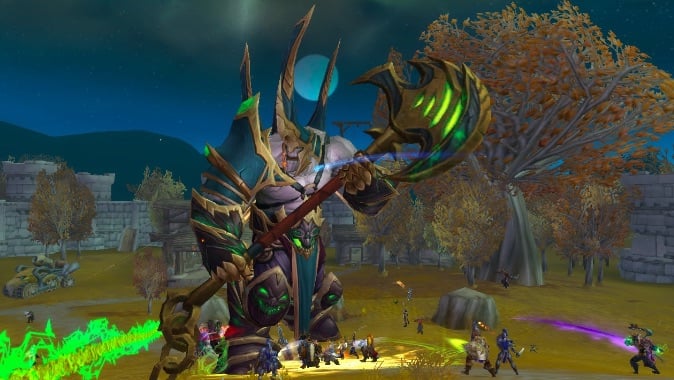 This is the Legion we made

Because the Legion cannot travel through time. Because Sargeras lacks that power, he must make use of Azeroth’s ley line network (since Azeroth is itself a Titan, and Aman’Thul once vouchsafed that when fully grown, Azeroth would be more powerful than the entire Pantheon combined) and the Caverns of Time, created by Nozdormu, who was granted his power over time by Aman’Thul himself. Thanks to his knowledge of future events gleaned through studying Karazhan and its strange visions, Sargeras knew we would come. He wanted us to come. He wanted us to interfer with Malchezaar in order to create the paradox inside the tower as a first step along the way to his ultimate goal — a world without a Nozdormu to police the timeways.

Why isn’t this the Legion we’ve fought before? Because we went back and time and meddled. We went back to Mount Hyjal and fought Rage Winterchill, stealing his phylactery and using it in the Black Temple to help defeat Illidan — who was a threat to the Legion with his plan to steal the Sargerite Keystone. How convenient it was that we stopped him, even if we had to time travel — again — to do it. In so doing, we altered what was going to happen. Everything we did created ripples in time that made Nozdormu unable to see past the Hour of Twilight. He was unable to see past the threat Deathwing posed to the coming of the Legion.

It’s a Legion unlike anything we’ve fought before because we changed their history. Remember, the Twisting Nether exists outside our reality. The reason our Archimonde didn’t recognize us, the reason Mannoroth didn’t know Grom was because the Legion’s personal timeline, tethered to the Nether, hadn’t changed yet. But it’s changed now. In essence, we altered the Legi0n. We made them worse… exactly as Sargeras intended when he gave us the keys to Karazhan.

Oh, and I suspect the crystal structures are the Naaru. By making the Legion aware of how serious the opposition from the Naaru actually was, we altered history so they sought out and destroyed the crystalline entities, and made ships and buildings from them. We inspired the Legion to be more aggressive and ruthless than they already were. Good job, us.

Next time… well, Legion will be here. So maybe we’ll talk about that.