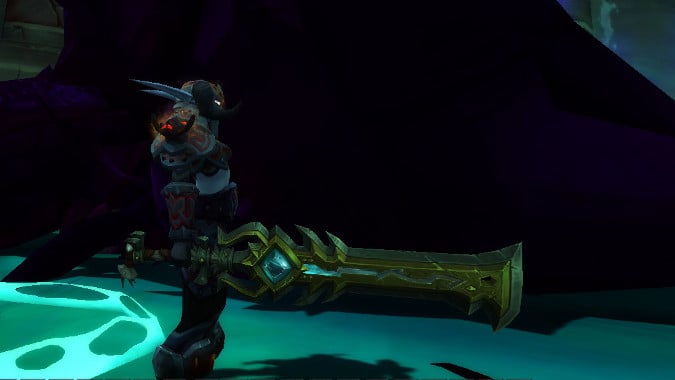 Guys, Legion is out.

Why are you even reading this? Why am I writing it? What’s wrong with all of us?

If you’re still here instead of playing Legion, well, this is the Queue. Let’s get this done quick so I can get back to playing.

I can’t decide if I want my hunter to be MM or SV this expansion and it’s driving me crazy. He’s a tauren so I think the spear thing is really cool but every single character I have is melee. He used to be BM but then they took away all my spells and made them MM only. :P

I’d suggest going MM or BM on your Hunter. As cool as Survival is, a melee Hunter is throwing himself into that melee pile and we’re going to see a ton of mechanics that utterly crush the melee. I’d stay ranged if I were you. You can always get the spear later.

Dude, I’d be playing right now if I wasn’t writing this.

Q4TQ:  I mostly play horde and throughout the pre-expansion content I have used a portal to the new Dalaran in the Cleft of Shadows of Org to get there. Now I am on my Alliance toons and I can’t find a similar portal. Where is it? I would expect that it would be in the mage tower but its not. What am I missing?

It’s in Stormwind Keep, first left hand turn you take after you enter via the front entrance.

I’ve been thinking about the things the demon bosses say during the invasions. They are always commenting on our “mortality” because they don’t die unless killed in the Twisting Nether. Isn’t it about time our mages got to work on a spell that would allow us to enter the Nether and do commando raids on the demons? Let’s see if we can put some fear into their minds by killing them when and where they least expect?

Going to Argus would be fine, but a strike, or many small strikes, at their heart would show them that we don’t take this crap lightly.

We don’t actually know how to kill demons. We know that when we kill them their spirits return to the Nether, but we don’t know if killing them in the Nether would do the trick. We know Sargeras knew how to kill them — that’s the threat he used when he ripped open Mardum, “Work for me or I’ll kill you for good” but we don’t know what that secret is.

In fact, it’s possible one of the reasons that Illidan wanted to go to Argus was because that’s where he hoped to find out how to kill Demons permanently.

I’m starting in Val’sharah. That’s the one zone I worked on in alpha/beta, so I can scoot in and out quickly and move forward :D

That’s what I did as well and as soon as I get a chance I’m heading back, a certain elf just asked me to help him find his sister.

Gameplay/Lore Q4tQ: Do you ever see the Forsaken being more then Undead Humans? as in, maybe becoming a new Faction consisting of Undead versions of most WoW Races to replace “The Horde” after a possible merge with “The Alliance” after some possible Garrosh-esque (not quite to that extent, but getting there) Schism?

I think technically there’s a few former High Elves in there already — a lot of the Dark Rangers certainly look like dead Elves. I doubt Blizzard will go full on and let you play as a Forsaken of any race — if you want that experience you might as well roll a Death Knight.

Blizzard Watch is made possible by people like you.
Please consider supporting our Patreon!
Filed Under: Just Legion, LEEEEEEEGION, Legion
Advertisement