Know Your Lore: Rise of the Banshee Queen

What do you do when you’ve lost everything? It’s a question Sylvanas Windrunner likely asks herself every single day. At first, the answer was easy: Exact vengeance upon the Lich King. In Wrath of the Lich King, Sylvanas accomplished exactly that, and later returned to Icecrown to find another Lich King sitting on the Frozen Throne.

Maybe it wasn’t Arthas, but the presence of another meant that ultimately, her victory was a hollow one. It mattered little in the long run. Arthas was dead, she’d won, and now the world could do whatever it wanted. She didn’t care anymore – which is why she promptly leapt off the peak of Icecrown Citadel and into oblivion.

Note: Today’s Know Your Lore contains some spoilers for Stormheim. 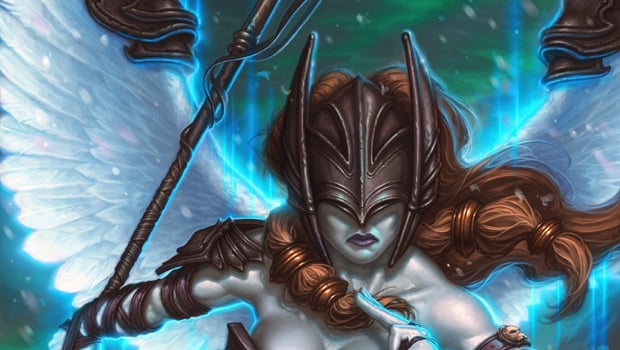 Sylvanas surrendered to oblivion, but what she found after her leap from the Citadel was nothing but the endless expanse of an empty void. No comfort, no solace, only anguish awaited her there. And, surprisingly, she began to do something she hadn’t done in years – she began to feel. None of it was pleasant – fear, hopelessness, pain, bitter cold, all of it came back to her in an agonizing rush, and she realized there was no final rest for her.

The val’kyr offered her a bargain – bound to the will of the dormant Lich King, they wanted their freedom, but needed a vessel to attain it. Sylvanas was in her way much like them – a sister of war, strong and possessing an understanding of life and death. They offered her a pact: as long as the val’kyr lived, so too would Sylvanas.

Left with a choice between eternal agony and the dreary rigors of undead “life,” how could she say no? She returned to the Forsaken with renewed vigor, a new purpose, and the gift of knowing that there was at least one thing that kept her bound to the world: she did not want to die. After having seen the depths of the void that awaited her, she did not wish her people to see it, either. 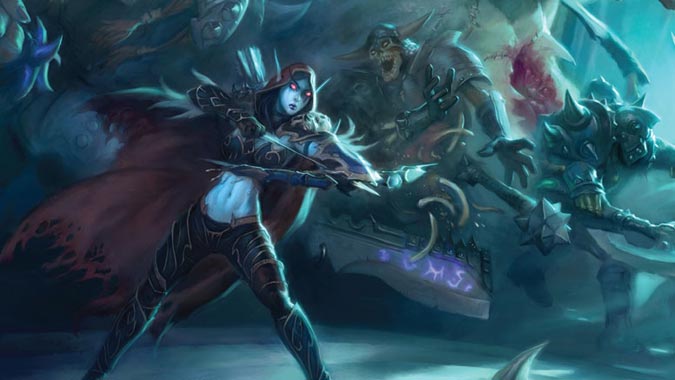 Hellscream and the Forsaken

It wasn’t much, but it was enough. The death of the Lich King proved to have its own problems, however – originally, the Forsaken were created by the Lich King, corpses that had been risen into undeath, but broken free from his grasp. With no Lich King, that meant that there would in turn be no new Forsaken – which meant that Sylvanas and her people would slowly die out.

The val’kyr changed all of that. With the powers of the val’kyr, new Forsaken could be created, meaning that her people would continue to live on…provided Warchief Hellscream didn’t kill them all first. Garrosh was very clear about his feelings towards the Forsaken, and when Sylvanas demonstrated her newfound power to raise undead, he was utterly disgusted. To Hellscream, the Forsaken were only useful in the context of disposable bodies to fill the ranks of the Horde – it mattered little if they died, because they were already dead. They were just being sent back to where they belonged.

Hellscream’s fall meant that Sylvanas could protect her people without the Warchief breathing down her back. Vol’jin wasn’t exactly the ideal successor in her mind – but he was competent, and he wouldn’t get in the way of her plans. But Sylvanas desperately wanted Hellscream executed, and when it appeared that this wasn’t going to happen, an unexpected ally popped up just in time to help her out. 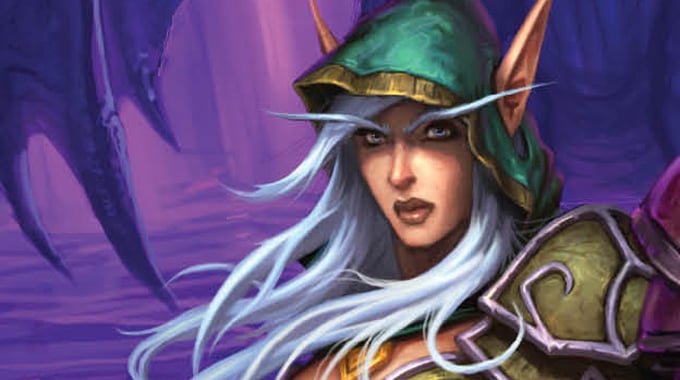 Vereesa wasn’t a fan of Garrosh Hellscream. His actions at Theramore were responsible for the death of her husband, Rhonin. And while Vereesa hadn’t really reached out to her sister in all the years since her death and rebirth as the Banshee Queen, the trial brought the two together again. After seeing just how much Sylvanas hated Garrosh, Vereesa decided to reach out to her sister. She wanted the Warchief dead. So did Sylvanas. {PB}

Maybe Sylvanas didn’t feel anymore – not like normal people, anyway – but reuniting with her sister stirred something in her heart. Together, they plotted on how best to assassinate the Warchief, coming up with a plan to poison Hellscream with his last meal before his sentencing. Vereesa, bitter and angry about the death of her husband, began to consider living with Sylvanas and leading the Forsaken at her side – something that pleased Sylvanas more than she cared to admit.

But the Forsaken wouldn’t accept a living leader. There was simply no way. So Sylvanas quietly planned to murder Vereesa and have her reborn as an undead, to forever stay at her side. But Vereesa had a change of heart at the last minute and warned Anduin of the assassination attempt, just in time for the Prince to intervene and save Hellscream’s life.

Sylvanas realized her plan had failed, and that was bitter news enough. But the fact that her own sister betrayed her, that was more than she could bear. Sylvanas had cautiously opened her heart to her sister, only to be betrayed – furious, she proclaimed she would never, ever attempt to love again.

Maybe she doesn’t love. But when it comes to the Forsaken, there is nothing of greater importance to her than their continued survival. If Azeroth is destroyed, so too are both the Forsaken and Sylvanas, doomed to that inescapable void of eternal torment that awaits them. In this, she stands with the other leaders of the Horde, and the Alliance as well – the protection of Azeroth is paramount.

Sylvanas willingly called her people to join the Horde in the assault on the Broken Shore, and they fought with a vengeance that could not be denied. So too did Varian Wrynn – she got a front-row seat to Varian’s brand of vengeance during the initial assault, fighting an abyssal at his side. In his own way, Varian earned her respect – she saw how well he fought, and he treated her with utmost respect as he did so.

But Sylvanas had her priorities. And during War Crimes,  Vereesa inadvertently reinforced Sylvanas’ resolve when she declined Sylvanas’ invitation to rule at her side. In that moment, Sylvanas realized that the living had no place for her, not anymore – not even her own family. No, the only people she had – the only people she could reliably depend on – were her Forsaken, protected as they were by the Horde.

To continue to survive, the Forsaken needed the Horde. And when push came to shove on the Broken Shore, it was brutally clear that the Horde were outnumbered. So here we have Sylvanas Windrunner, witnessing her Warchief’s fall. It’s not Banshee Queen Sylvanas that is assessing this situation – it’s the Ranger General, the military tactician that held Arthas at bay all those years ago in the forests of Quel’Thalas.

And she can see without question that this is a losing situation. She knows it. Vol’jin knows it. He tells her not to let the Horde die. Not this day.

So she called the retreat, because what other choice did she have? Staying would have been certain death. Should she have informed the Alliance of just what was going on high above them? Probably. But in the face of certain destruction, the only thing on her mind was a swift retreat – and they managed to escape, to live and fight another day. She followed the Warchief’s orders, and the Horde returned to Orgrimmar, where a grim fate awaited Vol’jin…and an opportunity waited for Sylvanas.

Vol’jin knew he was dying. He had enough of a connection to the spirits to see the writing on the wall. And just as his father Sen’jin had visions on the Darkspear Isles, so too did Vol’jin on the eve of his death. He called the Horde leaders together for what he knew would be the last time he’d see them. Sylvanas was the last to arrive, but it was Windrunner who received the biggest shock of them all.

The Warchief was brutally honest with her. He told her he didn’t trust her, he never trusted her at all, but the spirits gave him clarity in his final hours, and whispered to him a name: hers. And he told her that he never believed that in the Horde’s darkest hour, she would be the one to save it – but it was in her hands. With his last breath, he declared her Warchief.

Sylvanas was stunned, to say the least. It was one thing to lead the Forsaken, they understood each other in a way that no living soul could possibly comprehend. They were united in the fate that they suffered, undead bound to walk the world, but never fully live in it. The Horde, on the other hand…yet the Horde shared that desperation for survival, and the need to avenge Vol’jin. They wanted vengeance. 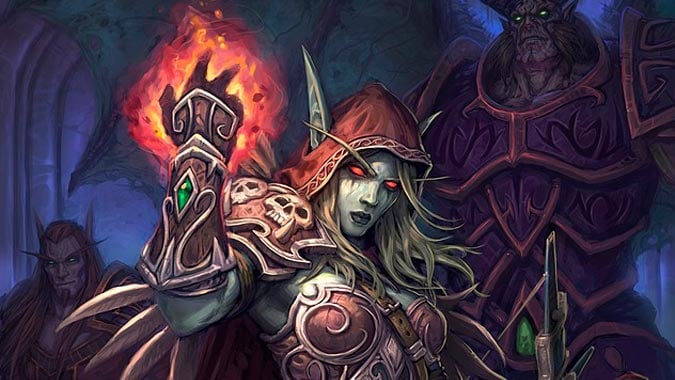 Future of the Banshee Queen

While Sylvanas’ task in Stormheim may feel a little selfish – after all, she appears to only be looking out for the Forsaken – it’s much more than that. Sylvanas is living on borrowed time, and she knows it. Her people are living on borrowed time, and she knows that, too. There were only nine val’kyr that originally made that pact with Sylvanas, high above Icecrown’s bitter plains. So far, five of those val’kyr have sacrificed themselves for her continued survival.

And it’s not just the Forsaken that need her anymore. If she’s expected to lead the Horde, she can’t die. She needs guaranteed resilience – she needs more val’kyr. What she’s trying to accomplish in Stormheim isn’t a selfish act, it’s a tactic to keep the Horde strong. Because if she has more val’kyr, then it doesn’t matter if her living soldiers fall over and die – she can bring them back. To a tactical mind, the best counter to the Legion’s endless army is another endless army. 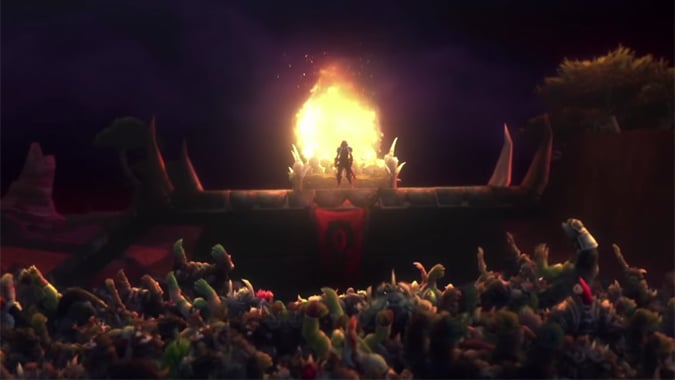 Not so long ago, Sylvanas Windrunner could think of nothing worth living for, and pitched herself from the heights of Icecrown Citadel into oblivion. She stared into the face of oblivion, experienced what it truly was to fear. She returned a changed leader as a result. We don’t know what the loa had in mind when they spoke to Vol’jin in his final hours, we don’t know what they saw, what we couldn’t see.

But they whispered the name of the Banshee Queen, and for better or worse, Sylvanas will answer that call.