The Queue: The Leveling Frenzy 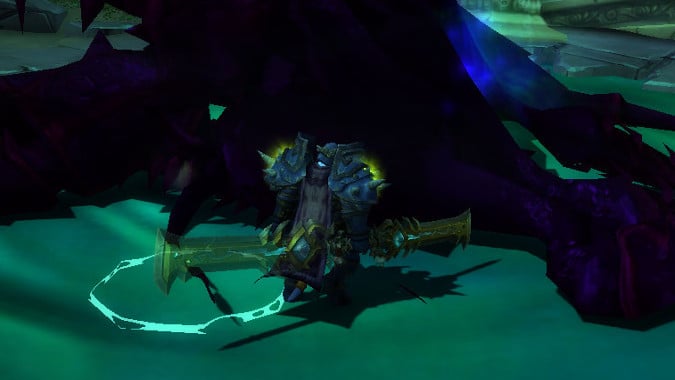 So my second Warrior is level 109 and I’m looking at which Warrior to level next. I think it’ll likely be my Draenei.

“But Matt, why not level some other class?”

Because I have severe problems with my thinking process.

This is the Queue. Let’s talk Blizzard.

I feel like some Legion spoilers are unavoidable here, so be warned.

Q4tQ: Rossi Edition:
Per the talk yesterday, and the link provided, did Blizzard forget that the Exodar is already fixed?  Or did the Legion damage it during the scenario again, thus returning the Status Quo?

The Legion did some damage to it during the scenario. You can see it, if you wander around the place. The repairs Velen orders at the end of the scenario are just structural ones to make sure it’s worthy for dimensional travel.

So, was anyone else disappointed that you got these cool titles from your class hall, but they weren’t *actual* titles? XD I kinda want to be able to walk around with the title Conjurer Qiuxiang. (Also a little miffed that the demon said I was archmage level, but all I get to be called is Conjurer.)

Well, I know that Battlelord is a title once you complete the Warrior campaign, and so I assume other classes have similar.

It’s going to be hard for me to decide between Battlelord and Death’s Demise.

Does anyone else have any problems with other players running around and hitting your mob just one time, sometimes when it’s just about to die, and then move on?

It halves my xp for the kill, while i guess they get the “other half”. It seems a bit rude.

I refuse to lie, I do this on any quest where it’s “Kill X of Y” because I freaking hat eit when I’m trying to kill seventeen quillboars but someone with awesome AoE is pulling everything. No more. I kill my seven and if that means you don’t get as much XP per kill, I’m not particularly concerned — the amount of XP per kill seems ludicrously low in Legion compared to the XP for quests and objectives anyway.
I’d much rather we be able to get these quests done faster than go back to the old system where one player gets to finish his quest first while the rest of us wait.
MISTAH JAY

Considering the Val’kyr are Undead, and those in the Halls of Valor use some form of The Light, could it be possible for the Forsaken (especially those raised by Scourge Val’kyr) to be “blessed” by Odyn’s Val’kyr to allow Undead Paladins to be a thing?

Not all Val’kyr are undead. The ones in the Halls of Valor that can channel the Light are servitors of Eyir, Helya’s replacement as first of Odyn’s Val’kyr. They are ascended beings, not undead, similar to the Stormforged Vrykul.

From a gameplay perspective, if Blizzard wanted that to happen, it could happen. But it’s a pretty Hail Mary pass at this point, especially considering what Sylvanas did to Eyir in the temple in Stormheim. Eyir is not likely to do anything to Forsaken but kill them.

Am I right in thinking that the Drogbar are a troll offshoot?

Maybe. At least one quest calls them Rock Trolls, albeit only in the name of the quest itself. That’s not enough for me to definitively say the Drogbar originate as an offshoot of the Trolls, but it’s feasible. Alternatively they just might be called that, in much the same way that Thylacines were called Tasmanian Tigers even though they weren’t tigers at all.

Perhaps Drogbar were just called Rock Trolls because they lived in the deep earth and resembled Trolls superficially. Until Blizzard states it more definitively, the best I have for you is a maybe.

Q4TQ: do you need to unlock/do World Quests to complete the Class Hall Campaign?

Okay. This has been the Queue. I’m going back to leveling yet another Warrior to 110 now.

Blizzard Watch is made possible by people like you.
Please consider supporting our Patreon!
Filed Under: Strom’kar, Strom’kar Again, Warriors, Warriors Again
Advertisement