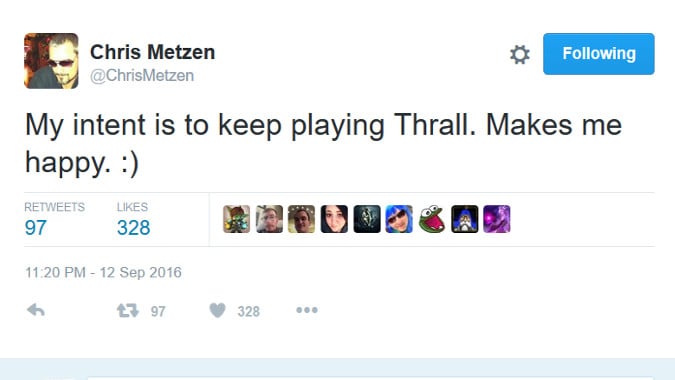 Admit it. You’ll miss him. I know I will.

This is The Queue. Let’s talk Blizzard. There’s going to be spoilers for various quests and storylines in Legion in this one, folks. Fair warning.

I spent a bit of time leveling a blood DK last night and I seem to be hitting like a wet noodle. I thought tanks were supposed to be great for leveling this expansion. To be fair I have barely any experience with DKs so I might just be doing something wrong. What’s up here?

I don’t feel that weak on my Blood DK, but I’ve noticed that it’s definitely a lot weaker than, say, my Arms Warriors. But the trade off is significant self healing and other mitigation abilities. However, I will say that I feel like tanks got the shaft this expansion compared to healers, who got all the tricks and who are all telling me how nigh-unkillable they are (I’ve heard this from a Resto Shaman, a Holy Paladin, and a Holy Priest so far) while my Prot Warriors and Blood DK’s definitely still feel killable.

I have not leveled my Shaman yet, but he’s definitely going Resto — we’ll see if I still feel this way after that. If it turns out people are overstating how strong healers are to level, I’ll mention it here.

I definitely feel like tanking DPS could be punched up a touch.

Now that we’ve had some time to chew on them, what are the opinions of the profession revamps?

I personally think they are “OK,” but they still feel like they don’t really know what they want to do with some of them. They added the quests and such, but from your playtime, did they add fun, or are they still just another grind with no real benefit?

My thoughts on the profession revamp as a Blacksmith:

No, they didn’t really add fun. They’ve done a lot to Blacksmithing that I frankly am still coming to terms with, but overall I think it’s been a touch difficult for me to focus on leveling the profession while also leveling my class, doing my World Quests, my class order hall campaign, the Xe’ra/Light’s Heart unfolding questline, dungeons… there’s a lot to do and I’m not getting it all done, and the profession quests have been taking it on the chin in favor of levelng my Nightfallen rep (as an example) or doing some World Quests.

I wasn’t enamored with having to start in Azsuna, nor with being sent all over creation to places I have no idea how to get to in some cases in order to keep working on the quests. I have one quest that’s sending me to a place in Highmountain and I’m just completely unable to get myself to go there when I have so much else to do on any given day.

I mean, I can go do a pretty awesome quest where I experience what it was like to be Illidan during the War of the Ancients, complete with an appearance by Broxigar, or I can talk to a Tauren about how to smelt ore. You see what I mean, right?

Regarding the Wardens, their world quests all see to be “kill this person.” Which makes sense given their function is to imprison these types of people.

My question is, is every person we fight for their world quest an escaped prisoner from the Vault?

At least one of their World Quests had me taking on a Nightborne who was just recently exiled from Suramar City. So I’d think that no, they’re not all escapees from the Vault.

So – how are people feeling about the level-scaling technology, now that we’ve had a chance to live it for a couple of weeks?

Personally, I like the concept but feel like it makes doing everything a bit more of a pain in the ass than I care for.  At no point can you “outlevel” any of the content – particularly for things like gathering.  Sure, monsters don’t scale with ilvl, but even at 830 I’ve found that some areas with tightly packed mobs can be a deathtrap if I’m not carefully pulling monsters.

I like the concept, but I don’t really feel like I’m truly getting that much powerful.  Certainly didn’t feel it while leveling.  I find this to be kind of a bummer, and am also afraid that mat prices are going to stay inflated for much of the expansion since slogging through mobs at level to farm nodes is going to mean less people are doing it.

We haven’t even started raiding yet, and there won’t be any raiding until next week, so I don’t know if I feel like you should feel all that powerful yet. You’re still a fresh level 110, and the idea of scaling zones is that you still have worthy challenges out in the world, that things like World Quests and World Bosses exist and you can go and do that content anywhere in the Broken Isles.

Essentially, there are pros and cons to the technology. One con is that yes, you never get to be 10 levels above any Legion zone. This makes the zones evergreen — Blizzard can put content for max level characters in these zones and it stays fresh while level 102 characters can still level up in said zones without being destroyed.

It means unlearning some behavior — you have to really measure your response to a place. You can’t just mount up and ride through twenty level 110 mobs the way you could if you were 110 and they were 101, you’ll aggro everything and get dismounted. But it also means that you can’t count a zone out, that the system exists and you can make use of it indefinitely.

As for mat price inflation, I get what you’re saying, and I do wonder how it’s going to shake out. It’s quite possible that wealth will be consolidated among those few intrepid enough to do the work of farming in these conditions, which is a somewhat vanilla sensation and I’m not sure how I like it.

Given that the Light and Narru were created by Elune, during the Great Ordering, shouldn’t Night Elves be allowed to become Paladins as the lore no longer supports the lack of such? Though, I would say given that they do have some magic based abilities that are granted Elune and a duty bound oath, couldn’t the Wardens, be just that a Night Elf paladin order by another name and be a way within lore to grant Night Elves the Paladin class?

First — Elune did not make the Light. We don’t know what Elune is or what Elune’s relationship with the Light is as yet, but she didn’t make it any more than the Void Lords made the Void.

Now, your question about Night Elf Paladins is both simple and complex. Let’s put it this way — there are currently no Night Elf Paladins because, culturally, the Night Elves don’t have a tradition of Paladins. The races that have Paladins currently (Blood Elves, Humans, Dwarves, Tauren and Draenei) either developed their Paladins recently as an offshoot of an older Priest tradition (Blood Elves, Tauren, Humans), were exposed to another people’s Paladin tradition and decided they liked it (Dwarves) or have a Paladin tradition of long standing based on first-person experience of the Naaru (Draenei).

Night Elves don’t have Naaru — they directly worship Elune. They tend to invoke the light of the moon rather than the Light itself, their veneration is skewed towards Elune rather than intermediaries such as the Naaru or the Light itself. This being said, the connection between Elune and the Naaru is fairly well confirmed by this point — we use the Tear of Elune to access Xe’ra’s Sentience Core. If she didn’t actually create them, then it seems odd that would work.

But I digress a bit. The reason Night Elves don’t currently have Paladins is cultural. It’s the same reason Blood Elves don’t have Druids. Clearly, Elves can be Druids, but Blood Elves have lost that cultural affinity with nature. It’s possible that Night Elves could develop Paladins much as Tauren did, but right now, they don’t have them.

Okay, that’s the Queue for now. I’ll see you guys Friday. Thanks to everyone who wished me well for the eye injection stuff, bought the book or otherwise helped out. I appreciate it.

Blizzard Watch is made possible by people like you.
Please consider supporting our Patreon!
Filed Under: Elune, Naaru, Paladins, Professions, Scaling
Advertisement