The Queue: This place is a mess 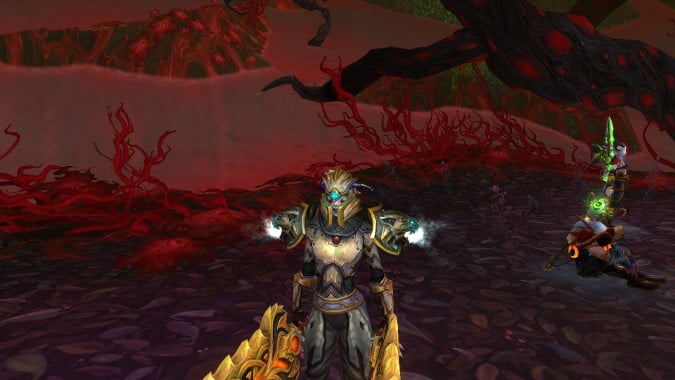 Seriously, Cenarius really let that place go. Every time I zone in to Emerald Nightmare’s version of Moonglade, it’s just such a mess. Ugh. Not my thing at all.

This is the Queue. Let’s chat about stuff.

So… what’s going on with the queue next week?

Flames shall rain from the sky, and the oceans shall swallow the land entire. Calamity shall be our constant companion.

Or Liz and I will handle it. We’ll see what happens. I expect I’ll do my usual Tue/Friday Queues. But considering Friday is actually BlizzCon itself, we might not even be doing a Queue that day. Who knows? We’re winging it.

BlizzCon is going to be a big party for Blizzard. 25 year anniversary, BlizzCon X, 20th for Diablo – a little celebration is in order!!

I’d be surprised by a surprise announcement…..well…Of course :P

You know, this is actually a good point. Blizzard may not really feel the need to make any big announcements this BlizzCon. Overwatch is out and it’s a runaway success. Legion is the most successful expansion in a long while. Hearthstone seems to be going strong, and we have the anniversaries to celebrate. 10th Blizzcon, 20th anniversary of Diablo, and Blizzard’s 25th birthday all to celebrate.

I still find myself wondering what a BlizzCon without Chris Metzen is going to look like. He was so very good at hyping Blizzard’s games.

Has anyone gotten Lingering Soul Fragments from non-Mythic dungeons?

I have exactly two of them and I haven’t run a Mythic dungeon since 7.1 dropped so I’d say yes, they drop from Heroic dungeons.

Question for the queue: The class hall perk that allows us to instantly complete a world quest, does this include the pet battle WQs and what other limitations are there?

It allows any World Quest that doesn’t have a dragon around it. Also, any quest you complete using that perk will not count towards the 4 you need to complete to finish an emissary quest.

Q4tQ: okay, what was the deal with Sylvanas and Greymane’s son?

I’m too lazy to google it.

Okay, so Sylvanas and Liam Greymane were in love? But Genn didn’t approve, and he forced them to stay apart because Sylvanas was Forsaken and Liam was a Worgen. He very much didn’t approve. So then Genn declared war on the Forsaken and marched his Worgen up into Silverpine, but some of his own people like Lord Godfrey helped Sylvanas sneak into Gilneas to see Liam. They swore their eternal love and both of them drank poison, but Sylvanas was already dead so the poison didn’t kill her.

Genn blamed her for Liam’s death instead of himself and he’s been angry every since.

Don’t listen to anyone else, they’re just parroting Genn’s propaganda.

I thought the Corrupted Blood Plague only stayed on Hunter pets and that was how it was spread?

I’ve read that people working with infectious diseases have studied how it spread and how people reacted to it. And they use it as a model of how a real infection may spread. It was as close to a real life example of how a deadly disease would affect a large population as you could get.

Cities had bodies all over the place. People were running around purposefully infecting other people. Others were hiding out in the woods so they wouldn’t get infected. Very interesting and kinda scary at the same time.

It absolutely was studied. In fact, it’s been studied by quite a few people. It’s even been argued that studying the corrupted blood plague has saved people’s lives.

When I was raiding Zul Gurub back in Vanilla, I saw the CBP hit Azjol-Nerub, my server at the time. A player deliberately (as far as I know) ran into the Ironforge AH and summoned his infected pet and soon IF was a wasteland. I’ve never forgotten seeing people’s bank alts just keel over.

Okay, that’s the Queue for today. Liam Greymane and Sylvanas were not lovers. Please don’t actually believe that one, TKC. I was joking.

Blizzard Watch is made possible by people like you.
Please consider supporting our Patreon!
Filed Under: K – I – S – S – I – N – G, Liam Greymane And Sylvanas, Sitting In A Tree
Advertisement