It’s time to take a look back into the past — and towards the future — of Diablo. Let’s check out what’s happening in Diablo 3 to celebrate the anniversary.

5:07: On stage we have Kevin Martens, Wyatt Cheng, John Mueller, and Julian Love, and they’ll be talking about the Darkening of Tristram, the Armory, and the new Necromancer class.

5:14: What would a 20th anniversary event be without an in-game party? Originally this started as a totally different thing, just adding classic music tracks. Now you’re getting 16 dungeon levels plus a boss level.

5:15: We’ve taken out some of the animations to give characters a stilted look, the audio is tinny to replicate the 90s experience. It’s in retro-vision. The combat is like Diablo 3 but with a 90s look. Use maps and monsters that match the retro look, and it has a classic Diablo UI.

5:17: When the Darkening of Tristram event happens, you’ll find a portal and you’ll head to old Tristram… where everything looks crappy. There are a lot of easter eggs, so look around.

5:19: Legendary gem and transmog! It’s literally the gem the hero shoves into their head to contain Diablo.  There’s now also a new Writ’s leg… and you can dual wield the classic leg and the new leg!

5:20: Monster art, like the Butcher, has been redone to look more like the original. It will all be going live in January!

5:21: What’s the Armory? This will save your items and skills so you can one-click swap armor and builds. You’ll be able to save five loadouts per character: skills, passives, items, Kanai’s Cube powers. Name sets how you want and it’s a single button to swap.

5:23: Doesn’t reassign Paragon Points so you don’t have to reassign them. Gems no longer have an unsocketing cost so they’ll be easy to swap around and the Armory will automagically grab your top-level gems when you switch sets. 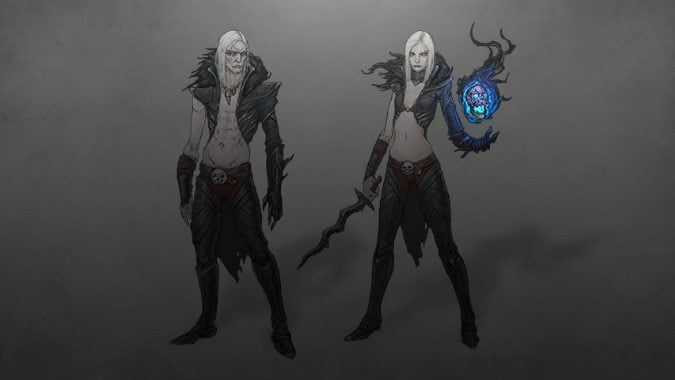 5:34: Pet and ranged magic class… isn’t that the Witch Doctor? How are they different? It’s about theme. Witch Doctors are dark, but they’re also kind of light-hearted. The Necromancer has a darker, grittier take on the undead vibe. It’s a class that’s deadly serious; not a lot of humor. If you were thinking of swinging by the necropolis after work, happy hour is not a thing.

5:35: Witch Doctor pets are entirely passive. They run off and do their thing. Necromancer pets are “active/passive.”  You get a passive benefit from each pet, but when you activate it you get an active ability. For example:

5:37: The Necromancer has two resources: essence (which doesn’t regenerate in time) and corpses (which you generate by killing monsters). When a monster dies by any means (whether you kill it or someone else does), there’s going to be a little bit of extra corpse material left behind that only the Necromancer can see — and they use them to power their skills. Some skill examples:

5:45: The Rise of the Necromancer Pack adds two character slots, two stash tabs, cosmetic goodies, and it will all be coming next year, “second half-ish.”

5:46: Seasons are coming to consoles! We’ll hear more about this and other new features in the Diablo panels tomorrow.

That’s all for this panel, but we’re sure to hear more about what’s coming to Diablo tomorrow… even though it sounds like we’re waiting until 2017 to see most of it.

Blizzard Watch is made possible by people like you.
Please consider supporting our Patreon!
Filed Under: Diablo-3, Necromancer
Advertisement