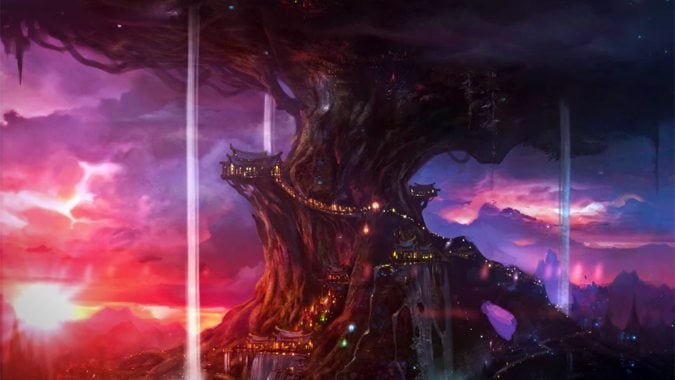 Scattered around Azeroth are a handful of massive, awe-inspiring trees that dwarf the world around them. World Trees aren’t just in the world to conveniently house Night Elf populations, however. Each tree has a unique history and a unique purpose. And all of these trees tie back to the works of the Titans that shaped and crafted the world of Azeroth as we know it today. 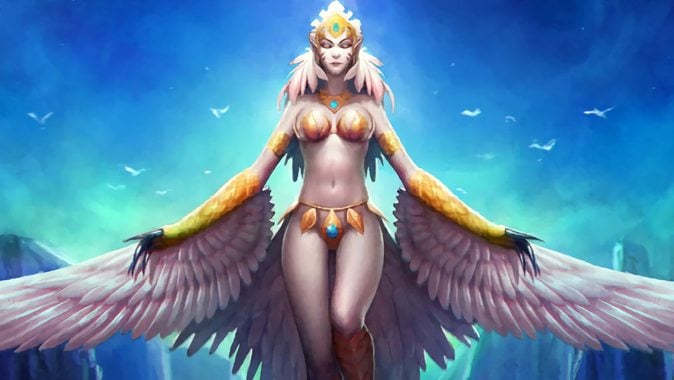 Before the World Trees, there was the Mother Tree — G’Hanir. When Azeroth was ordered at the dawn of creation, the Titan Keeper Freya created the Emerald Dream. The first thing Freya shaped within the Emerald Dream was G’Hanir, a massive tree that bloomed with all the fruits and flowers of Azeroth. From this tree came life, healing, and balance that extended beyond the Emerald Dream and into the world itself.

G’Hanir also became both haven and home to all of Azeroth’s winged creatures over time. The Wild God Aviana was enchanted with the tree, and spent years melding her power with it, to the point that her spirit eventually melded with it. Unfortunately, this would end up being the great tree’s downfall.

During the War of the Ancients, Aviana was killed by demons. The shock of her death reverberated throughout the Emerald Dream, and G’Hanir shed all its leaves in turn, dying as swiftly as Aviana had. But Aviana’s spirit still lingered on, despite her death. And G’Hanir lingered on as well.

One fragile branch remained, gifted to the Green Dragonflight. Some speculated it was Aviana’s spirit that had gifted the branch to the dragons. Although the branch was a powerful Artifact, in the wake of the Sundering there was something of greater interest left behind — a single acorn, the last gift of G’Hanir.

This was the acorn used to create Nordrassil after the Sundering — the first of Azeroth’s World Trees. Nordrassil had a unique purpose. On Hyjal’s peak, Illidan Stormrage created a second Well of Eternity, using water from the original Well. Left on its own, the dragonflights knew that the Well’s chaotic magics would once again attract the Burning Legion. Something had to be done.

That something was the growth of Nordrassil. The roots of the tree completely covered and shielded the second Well of Eternity. Alexstrasza grew the tree and blessed it with strength and vitality, which carried over to the Night Elves. Ysera blessed the tree to bind it to the Emerald Dream, and the Night Elves as well. And Nozdormu’s gift was the greatest of all — so long as Nordrassil stood, the Night Elves would remain immortal.

With these blessings, the dragonflights ensured that Nordrassil would always be protected. And it was, right up until the end of the Third War. Archimonde’s defeat meant that the second Well of Eternity wouldn’t fall into the Legion’s hands. But Nordrassil was heavily damaged by the explosion that killed Archimonde. Nozdormu’s blessing faded as a result, and with it, the Night Elves’ immortality. 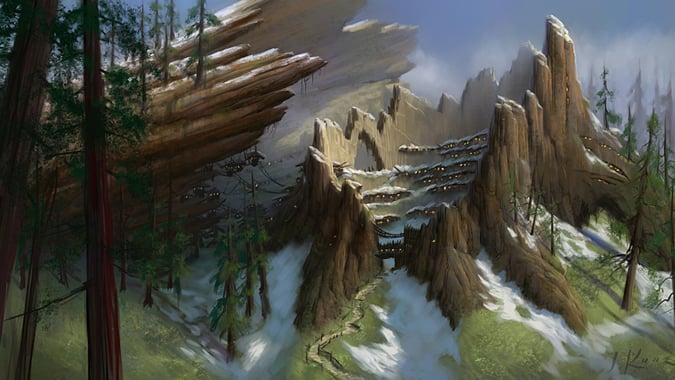 Thousands of years before the First War, Fandral Staghelm discovered deposits of saronite — dark metal that resonated with evil. To combat the spread of these deposits, Fandral stole branches from Nordrassil, planting them over the sites. The largest of these Fandral and his druids named Andrassil — Crown of the Snow. On the one hand, Fandral’s reasoning was solid enough. If Nordrassil could protect and shield the Well of Eternity from the rest of the world, then surely Andrassil could do the same for this new menace.

On the other hand … Fandral never asked the Cenarion Circle for its approval on the matter. And Malfurion and the Circle were furious about it. Still, Andrassil seemed to be doing its job — the spread of saronite had been halted, and the tree appeared to be thriving. As the years passed, however, that assumption proved to be deadly. Fighting broke out between the taunka and the forest nymphs, two races that had never shown any signs of aggression towards each other.

After investigating, the druids were horrified to discover the cause — Andrassil had been corrupted. The trees roots had grown so deeply that they touched the prison of the Old God Yogg-Saron. Yogg-Saron infused the tree with its foul energies, which spread and drove the surrounding creatures to madness. And unlike Nordrassil, Andrassil didn’t have the blessings of the Aspects working to protect it.

There was nothing left to be done but to destroy the World Tree. The sad task was carried out, and the tree was renamed Vordrassil — Broken Crown. Although the tree had to be sacrificed, the growth of saronite was still halted as a result. 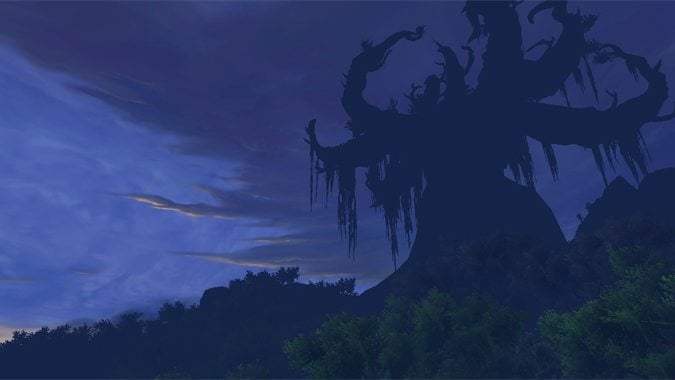 The War of the Ancients and the Sundering had tumultuous effects on Night Elf civilization. For some Night Elves, it would mean a fundamental change of who — and what — they were. Xavius was the first of the satyr, his disembodied spirit housed in a new body crafted by Sargeras. He soon began to spread the curse to other Night Elves — and by the end of the War of the Ancients, there were a substantial number of the demons to contend with.

After the War of the Ancients was over, many of the surviving satyr were captured. There were plenty of Night Elves who argued that the demons be put to death. However, it was decided that the creatures would instead be imprisoned beneath the World Tree Shaladrassil, placed in a deep, eternal slumber. As for Shaladrassil, its origins are a mystery that have yet to be fully explained.

Nordrassil is usually referred to as the first World Tree in existence. But dungeon text for the Ancient Oakheart states that the creature was formed from an offshoot of Shaladrassil and “survived the Sundering.” That implies that Shaladrassil itself existed before the Sundering, making it older than Nordrassil.

Regardless, the fact that it was a prison for the satyr after the War of the Ancients is really the only relevant piece of information we have about Shaladrassil. In Legion the World Tree was corrupted, and the satyr were released from their imprisonment. 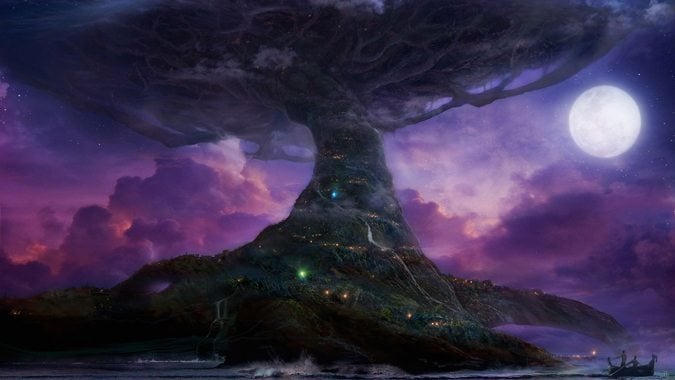 After the Third War, Nordrassil was severely weakened, and so were the Night Elves. Not only did they lose the World Tree, they lost the immortality that came with its existence. Seeking to regain what the Night Elves had lost, Fandral Staghelm broached the idea of growing a new World Tree to a number of Druids. Malfurion eventually heard about the plan and dismissed it, pointing out that there was no way that nature would ever bless that kind of selfish act.

Shortly after that, Malfurion Stormrage sent his spirit into the Emerald Dream, and vanished. Fandral stepped up as the new Arch Druid, and promptly went about making his proposed World Tree a reality. Teldrassil — Crown of the Earth — was created, and the Night Elves settled in. However, Malfurion’s warning proved to be an accurate one, as both Nozdormu and Alexstrasza flat-out refused to bless the tree when Fandral asked.

Over time, the tree began displaying some disturbing signs of corruption. Furbolg attacks and satyr sightings became more common. Eventually, the source of the corruption was uncovered. Tricked by Xavius’ spirit, Fandral Staghelm had grafted a fel-tainted branch of the tree that contained the satyr’s soul to the World Tree. Once it was removed, the tree began the long process of recovery.

Teldrassil was helped along in this by Alexstrasza and Ysera. After seeing how much the tree had thrived without the intervention of the Aspects, they decided to belatedly bless it. However, Nozdormu still hasn’t given Teldrassil his unique blessing — and so the Night Elves still lack the immortality they once possessed. 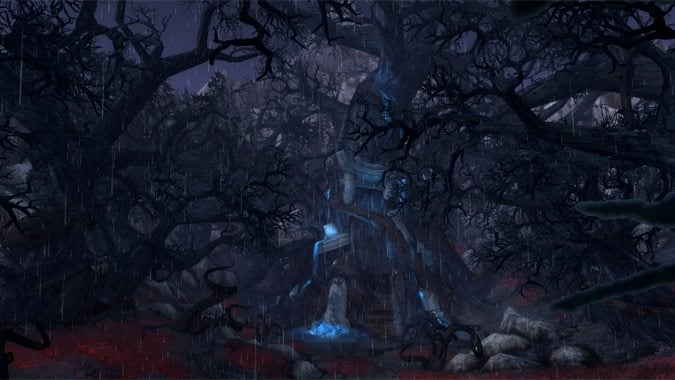 Although not technically classified as World Trees, there are other trees spread across Azeroth. These Great Trees were saplings from the World Tree, planted by Fandral Staghelm around the same time that Andrassil was created. While they didn’t develop into full fledged World Trees, they did stop the spread of saronite, as well as acting as portals into the Emerald Dream.

But they also served a far darker purpose. Together with Andrassil, the trees acted as gateways that allowed the Old Gods access into the Emerald Dream. This began the slow corruption we call the Emerald Nightmare. Fandral Staghelm may have stopped the spread of saronite with clever Druid antics, but in doing so, he allowed the Old Gods access to the very place he was sworn to protect.

In addition to the Great Trees, there are two other trees of note — Daral’nir and Tal’doren. Linked between Emerald Dream and reality, these trees aren’t technically classified as World Trees, nor are they considered Great Trees. But they served a significant purpose to the Night Elves. After the War of the Satyr, Malfurion Stormrage had to contend with the Druids of the Scythe — Druids that became the first Worgen. 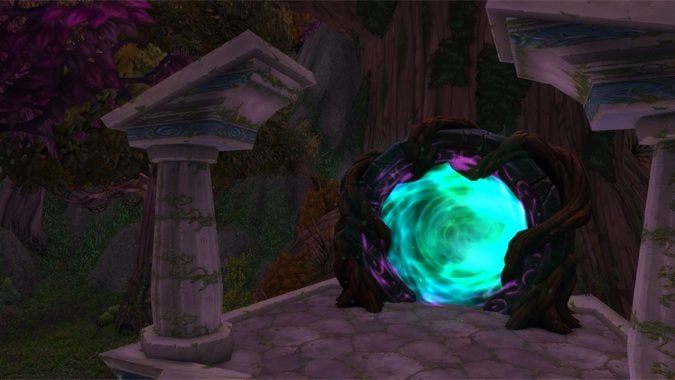 The purpose of World Trees

Originally, the purpose of G’Hanir was simple enough — to perpetuate and spread life throughout the world of Azeroth. The World Trees that followed after the fall of G’Hanir all have differing histories, but all seemed to be crafted for the purpose of containment. Whether it was Nordrassil sealing in and containing the wild energies of the second Well of Eternity, Andrassil and the Great Trees containing the spread of saronite, or Shaladrassil containing the corrupted satyr, each of these trees worked to keep the world safe.

And maybe that’s the main reason that Teldrassil didn’t work as promised — it wasn’t created for the correct purpose. Regardless of what they contain or lock away, the World Trees seem to all be devoted to one thing: protecting Azeroth. The days of receiving blessings from Aspects may be over, but the World Trees remain, sheltering the world and keeping it safe from whatever might threaten its continued existence.