The Queue: Our fearless leader 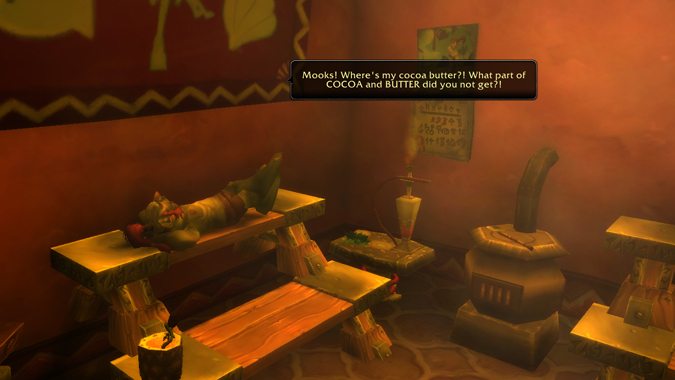 It’s nice to know that even when the world is going to hell in a handbasket, you can count on good old Jastor Gallywix to ignore everything in favor of spending a day in the sauna. I’m pretty sure the only Burning Legion he’s interested in is the one currently keeping the coals in there nice and hot. …can we get rid of this guy already?

Never noticed that Basic Campfire has a pan and fork on it. When did it get that?

Ah, well the simple Basic Campfire actually has quite the illustrious history! Back in vanilla, you built the fire on your own, using Flint and Tinder along with some Simple Wood. As of Patch 3.1, you no longer needed either one to create those cozy flames. In Patch 4.3.0, the spell name was changed from Basic Campfire to Cooking Fire — and in Legion, it got a graphics update that included the addition of the pan and fork.

Frankly, I kind of miss the old plain and simple Basic Campfire. I mean, it’s nice that there’s been a graphics update and all, but I don’t really need a pan on the thing to know that I can use it for cooking. What if I don’t want to cook anything? What if I’m just building the thing so that me and my closest buddies can sit around it and stare at each other for a while?

Q4tQ: So how long until we find Wrathion’s exsanguinated body in Khadgar’s trunk, right before he finally reveals he was Sargeras all along and he blows up the BC starting zones?

Look, Wrathion may just be a little guy, but he’s very, very clever. If anything shady were going on with Khadgar, I’m pretty sure we’d already know about it. And I’m pretty sure Wrathion wouldn’t fall for any tricks, schemes, or other nonsense that might result in his demise.

I’m mostly saying this because I really hope we see the little guy make a return at some point in the near future. He deserves better, after the amazing debut he made in Cataclysm.

Do demons need to breathe? Warlocks have the buff Unending Breath. So I would take that to mean demons don’t breathe, and warlocks have the ability to use that ability from their demon and pass it on to others.

But demon hunters absorb and take on the powers of demons, but they don’t have a way to stop losing breath underwater.

That has most definitely never been addressed in any aspect of lore what so ever — so I don’t really have an answer for you, I’m sorry! I’d assume it’s probably not too far-fetched to think that one of the many, many demonic races working for the Burning Legion has the ability to breathe underwater. Or maybe Warlocks are just way more into swimming than Demon Hunters.

Speculative Q4tQ: Do you think the reason Archimonde had a piece of the Rift of Aln on him in Warlords was because even if the upcoming Legion invasion fails, he still has a piece of the Nightmare that can be used to infect other worlds (or Azeroth again) with? or maybe to create a weapon from it, like The Maw of the Damned or Frostmourne, but made from Nightmare

Well…you have to remember that Xavius was originally transformed into a satyr by Sargeras — so he has a link to the Burning Legion. I suspect that piece of the Rift of Aln that Archimonde was carrying was just a confirmation that the Legion’s creation was still out there on Azeroth, in one form or another. He is technically still affiliated with the Burning Legion, although after so many years working in close capacity with the Old Gods, his loyalty is something I tend to question.

QftQ: What’s the defining thing of WoD? I don’t even remember what was on the box. I don’t immediately think of Archimonde, even though he was the last big-bad.

Warlords had Grommash on the box, although really it felt like he played much less of a role than Gul’dan in the actual story. I don’t know if putting Gul’dan on the box would’ve been all that effective, however, given our introduction to the guy. Grommash definitely stood out in the introductory experience, but he promptly fell by the wayside, whereas Gul’dan didn’t have the best of introductions, but he was woven throughout the story far more than Grommash ever was.