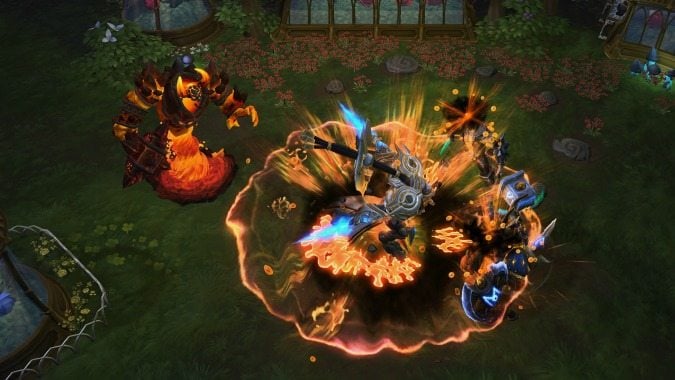 Ragnaros was released in Heroes of the Storm a week ago, so practically like clockwork he’s gotten some serious nerfs today. (Sorry, everyone who was waiting to grab him at a discount.) Empower Sulfuras, Living Meteor, Lava Wave, and all Molten Core abilities do less damage (with Lava Wave getting the biggest decrease), and cooldowns for Molten Core and Lava Wave increased.

Artanis, Diablo, Dehaka, and Zeratul are all getting less serious adjustments, with a mix of buffs and nerfs. Check out the full patch notes — which include a few bug fixes, to boot — below.

Developer Comments:  The addition of Ragnaros to the Nexus has once again unmistakably proven how painful it is to stand in fire. Lava Wave and Molten Core seem to be the leading power-houses of the newly released Raid Boss, so we are targeting the majority of the changes at them. We are also carefully monitoring his interaction with the Battlegrounds and are prepared to make adjustments as needed.

Developer Comments:  We feel we’ve slightly over-nerfed Artanis’ survivability for his added playmaking potential by being able to cast Phase Prism during Blade Dash. We don’t think he needs much, but this small change should make Artanis feel a little more like the bruiser that he is meant to be.

Developer Comments:  It’s been nice to see the positive reactions to the Lord of Terror’s recent changes. That said, the latest rework gave him some new survivability talents that are slightly over-performing. The new stacking Resistant system is making the interaction between Shadow Charge, Bulwark and Soul Shield a bit too strong, so we are making some adjustments to compensate.

Developer Comments:  We couldn’t be happier with the state that Dehaka is in, but we have heard the feedback on Enhanced Agility. While we feel it is still a bit too early to make any large changes to the talent, we are happy to bring the numbers up in order to give him Mounted Move Speed when this is fully unlocked.

Blizzard Watch is made possible by people like you.
Please consider supporting our Patreon!
Filed Under: Balance Patch, Patch, Ragnaros
Advertisement