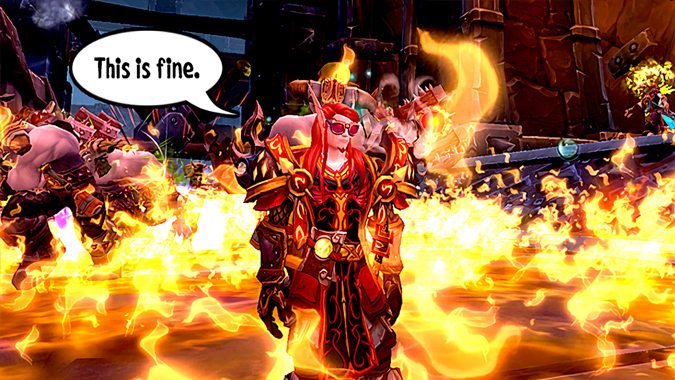 It’s time for some late Friday night class updates, everyone! This evening, Ornyx posted about tuning changes that will be going live just before Nighthold with this week’s maintenance cycle (Tuesday for US realms and Wednesday for EU realms). Because Blizzard doesn’t like to make big class tweaks during a raid tier — which is why patch 7.1.5 came out pre-Nighthold — so it does feel like they’re trying to get all of their tweaks in before Tuesday. However, Ornyx says Blizzard will be watching spec performance in Nighthold and continue to adjust as needed, so we’ll see what happens.

If you’re trying to keep up on all things 7.1.5, here are the hotfixes we’ve seen so far:

Now, on to the coming class changes!

Hey all. As with each major patch that significantly changes class spells and abilities, we review tuning based on live data once it’s live, to look for any tuning issues that may have arisen. Based on that, we’re planning to make the following changes during the next weekly restarts in each region. We’ll continue to pay close attention to each spec’s performance as players progress through the Nighthold, and are ready to make further adjustments as necessary.

Additionally, we’re planning to make some general changes to PvP balance, with the intent of lowering overall damage from a few overperforming specs and talents. Those exact changes have not yet been finalized, but we’ll share them as soon as we are able.

Blizzard Watch is made possible by people like you.
Please consider supporting our Patreon!
Filed Under: Hotfixes, Maintenance
Advertisement