Valeera on the Heroes PTR tomorrow, plus new skins and mounts 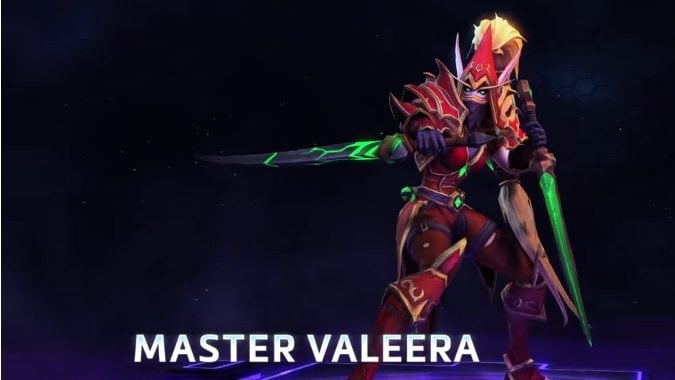 The Heroes of the Storm PTR will go online tomorrow with new hero Valeera, and we’ve just gotten a first look at this new hero in a preview video. Her skillset is classic World of Warcraft Rogue, with Vanish, Sinister Strike (Q), Blade Flurry (W), Eviscerate (E), Smoke Bomb (R), and Cloak of Shadows (R). We don’t have full details of how all of her skills work, but we’re certain to see a more in-depth preview soon — or we’ll catch the details on the PTR tomorrow.

With Valeera, we’re also seeing a host of new skins and mounts.  In addition to Valeera’s base and master skins, she has a Demon Hunter skin that matches the current Legion Demon Hunter aesthetic, and there’s even a new Felsaber mount to match. These Valeera skins and the matching mount will probably go live with Valeera herself — who will probably go live next week. There are also new epic skins Lunar Li-Ming and Monkey King Samuro (both with appropriately themed abilities), plus new Lunar Rooster and Nimbus Cloud mounts.

So when will you see all of this in game? Blizzard hasn’t made any official announcements, but with the PTR going online tomorrow we should see Valeera on the live realms next week. As to Lunar Li-Ming and the Lunar Rooster, last year the Lunar Festival started in Heroes on February 2, so we may see those in about two weeks. But what about Monkey King Samuro and the Nimbus Cloud Mount? Your guess is as good as mine.