Characters created in WoW are already participating in a pre-packaged story. Each expansion has its own story arc with its own resolution. Along the way, your character interacts with a wide variety of quest givers, vendors, and even major figures and faces in lore. For roleplayers, the underlying question to all this pre-fab story is whether any of these relationships are truly real. Is your character well-known and easily recognized by faction leaders? Are you supposed to be the champion of champions?

Short answer — you can be, if you’d like to be. As a roleplayer, you’re free to pick and choose what moments of story you’d like to use in your own. Or hey, if none of it really appeals, you can ignore it altogether. It’s a matter of player choice, and a matter of separating the game reality from the one you’ve constructed for your character.

But remember, these quests weren’t necessarily written with roleplayers in mind. They were written to create a story that everyone could follow. It’s a cool story, and it’s a pretty compelling story. It’s the kind of story designed to make you as a player feel like your contributions to the game world are meaningful. That your character is important — that all their hard work over the years eventually pays off.

In that way, that main story is also a game mechanic. It’s something for non-roleplayers to follow, something to keep them entertained. Building a character for roleplaying, and roleplaying in general, aren’t really the main objectives of the game. It’s an option that’s available for creative people that want to play with it, but it’s by no means part of the game itself.

Major lore figures and you

Along those lines, it’s certainly not out of place to suggest your character knows a major lore figure. We’ve been shown that the various racial leaders out there interact with the public. It’s not too far of a stretch to say your character has interacted with these lore figures before. You can roleplay whatever you want — put yourself on a first-name basis with a lore figure if you’d like to.

But you want to remember that you can’t really roleplay with an NPC. You can, however, roleplay with a fellow roleplayer. And just like you can pick and choose how to present your character’s story, they can choose to accept it. Major lore figures are a touchy subject — some people like to use them in stories, some prefer to keep all that main canon lore out of their character’s history. It could potentially narrow your prospects in terms of people willing to roleplay with you.

There’s no right or wrong way to approach using a lore figure in a character’s backstory. If you feel like it’s something you want to play with, you’re certainly free to do so. If you’d like to try playing with existing lore figures without stepping on anyone’s toes, you might want to try using a minor NPC rather than a major player. 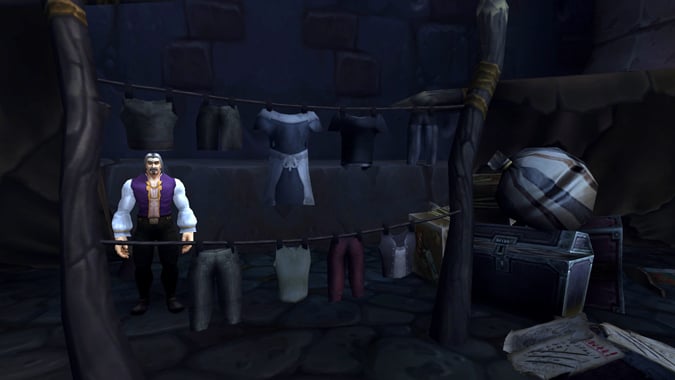 Minor characters and you

Minor characters can be anything from quest givers or lore characters that are rarely used, all the way to vendors: NPCs that don’t really hold a purpose in the game beyond telling your character where to go, or handing over gold for your items. Since these NPCs don’t hold a lot of weight in terms of story, there’s nothing wrong with using your character to fill that in a little.

And because, again, these characters don’t really hold a lot of weight in lore, other roleplayers are typically a lot more open to the idea that your character is familiar with them. These NPCs could be close friends, family, contacts, confidants — it’s all up to you. Write them into your stories, or reference them in conversation. Heck, give them backstories of your own, if you like!

The other nice thing about using minor NPCs is that you don’t have to worry about contradicting any established story. Since they’re rarely, if at all, involved in that big overarching storyline, you’re free to play with them as you see fit. A major character, on the other hand, has some pretty extreme established lore already — lore that players don’t like seeing contradicted.

Another thing to consider is just how you want your character to be presented. Do you really want to play a big hero? Then that main game storyline might have all the ideas you could possibly need. But what if you looked at the game from the other perspective? What if your character wasn’t necessarily modeled after that role you were automatically assigned? What if, instead, your character plays that role of NPC?

It might seem a little backwards — after all, don’t you want your character to be a hero? But sometimes, the best stories aren’t the tales of heroic deeds, but the tales of just how those heroes came to be. By starting off with more modest origins, you’re leaving your character open for some pretty major development.

No matter which tactic you choose, a roleplayer plays a very different game than other players. Major lore figures, zone and quest stories — it’s up to you how much you want to use with your character’s tale. After all, roleplay isn’t really about the story you’re being told. It’s about the story you’re crafting all on your own. Be creative, have fun with it, and your character will develop a life all their own — whether that includes NPCs, or just your friends and fellow roleplayers.