Hearthstone’s State of the Meta 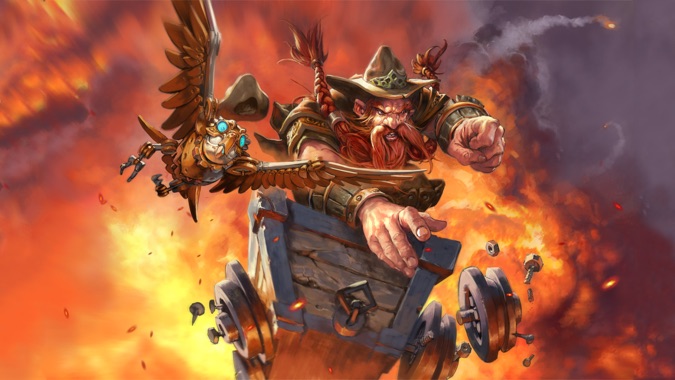 Anyone else finding the Hearthstone meta pretty stale? I know I am. I’ve taken a bit of a small break from the game. I see nothing but Reno decks, Shaman decks, and Pirate decks. On the other hand, I only represent a small sample size of one, at a specific rank that isn’t even legend.

Are things really that bad right now? Hearthstone Game Director and Blizzard’s most photogenic staffer Ben Brode took to the forums to discuss more. While Ben talked much about balance and the state of the meta, what I found most interesting was the win percentages and statistics. For example, Undertaker Hunter clocked in at a 60% win rate when it was around. The good news is that it appears balance changes will be on the way, and are expected to arrived sometime at the end of the month.

Read on for the full explanation.

I’ve been reading a lot of feedback on the state of the game, whether pirates are too good, and whether shaman is too good. I’m also seeing a lot of folks wondering what we are planning to do about some of the current issues.

I should start by saying that we truly appreciate all of your feedback. I think Hearthstone is at its best when the development team and the community discuss and share ideas back and forth. These are real issues, and hearing about your experiences has been helpful for us in determining next steps.

So today, I wanted to talk a bit about the meta, potential nerfs, and how we think about balance.

To get us started, I wanted to define some terms. These are common terms, so there may be no revelations here, but it’s useful to make sure we’re talking about the same things, and how these terms (which are common to all games) are specifically used in relation to Hearthstone.

The Meta is short for the ‘metagame’. The game is what happens once you tap ‘Play’ and see the spinner. The metagame is what happens outside of the game. It’s what deck you choose to play. It’s what decks your opponents choose to play. Some people define ‘metagame’ as literally everything game-related, including chatting with friends about it, reading information about it online, or anticipating upcoming content. The Hearthstone community uses it more frequently as “all decks that everyone is using” and often more specifically as the “the top X decks”. If there are 7 decks that all see enough play that you see them again and again while you play, you might say those decks are ‘the meta’. If you’re playing a deck that people don’t see often, you are playing ‘off meta’. If you build a deck specifically to beat the most popular deck then you are playing to counter the meta. It doesn’t matter if a deck is good or bad, what affects the meta most is how frequently any one deck appears. It’s important to note that bad decks can be part of ‘the meta’, and good decks might not be widely spread enough yet to have become part of ‘the meta’.

For example, a class might have a very high win rate, relative to others. That’s not balanced. When that happens, more people tend to flock to that class, increasing the play rate. Eventually, that class will become played more than other classes. That’s also not balanced, and it’s the more worrying imbalance.

We believe, at its core, Hearthstone is more fun when you are having a variety of experiences. We randomize the order of cards in your decks, restrict you to 2 copies of each card, and limit your hand size and the amount ‘card draw’ we print to help make experiences different each game. We print cards with random effects partially for this reason. But one of the biggest ways to give you different experiences (and problems to solve) each game is to give you different opponents with different decks. We also release new cards, because even all of these things isn’t quite enough to keep things variant over time.

There are games with less variety (like Chess), that are still very deep. But we believe that allowing creativity in deckbuilding, and giving players new and different problems to solve is really fun.

The value of Balance, then, is to keep giving players different experiences.

This is not to say that each card’s role is to compete for a spot in a competitive deck. Some cards (like Majordomo Executus), are intended to be a lot of fun for players who like big splashy moments. Other cards are meant to be deckbuilding challenges to players who like to experiment with cards that others have deemed weak (Hobgoblin). Some are meant to be hooks for learning or comparison. (“This is like Chillwind Yeti, but better! That must be good!”)

— Statistics and the State of the Meta —

I wanted to go through some stats about the current meta, and talk about how we analyze them.

Over the last two weeks, 30% of players are piloting Shaman at Legend. If you include all ranks, 17% of players are playing Shaman. This includes several decks: Aggro Shaman, Midrange Shaman, Control Shaman and Jade Shaman.

The worst point of imbalance in our history was Undertaker Hunter, where Hunter was played by 35% of players across all ranks.

The Pirate ‘package’ of Small-Time Buccaneer and Patches the Pirate is played in about 50% of all decks at rank 5 and above.

The average win rate of the best deck in the meta is 53%. Historically, there has never been a ‘best deck’ with a lower win-rate. Put another way, this is the worst ‘best deck’ in Hearthstone’s history. The win rate is consistent across all ranks, though individual players have wildly variant individual experiences. We don’t include mirror matches in our calculations.

The highest win rate of all time was Undertaker Hunter around 60%.

When evaluating balance, we look at the win rate of decks and classes, compare them to the impossible ideal (50%), and to the worst case (60%). Knowing that 50% is impossible, we just want it to be “close”. This isn’t a science, but for us, that has traditionally been between 53% and 56%. This isn’t the most important metric, though. If a deck has a 70% win rate, but only a handful of players are playing it, that’s great. It doesn’t cause the issues of non-variant gameplay… yet. Traditionally when a deck has a very high win rate, people begin to copy it, and it becomes a larger and larger part of the meta. Another important consideration for us at that point is ‘Counters’.

When a deck loses to specific cards or other decks, players can be rewarded for playing those counters as that deck rises in popularity. If a deck ever became 60% of the meta, but there was a deck that handily beat it, then you could have a 60% win rate by playing that deck, and it would become the new best deck in the meta. This phenomenon causes metas to change over time. We’ve seen that so far since the release of Gadgetzan – Pirate Warrior hit peaks of 30%, but shrank to as low as 10% over time. There were also a few days in which Reno Warlock was the dominant deck and which Rogue was the dominant deck at very high skill levels. When the meta is still changing, we don’t like to make changes to cards.

Right now, Aggro Shaman is one of our highest win-rate deck, but has a 35% win rate vs Control Warrior decks that are tuned to beat them. Reno Mage is also a bad match up for them. Does this mean that it has become ‘correct’ to play Control Warrior? It depends on the other decks in the meta, and whether Aggro Shaman continues to become more popular. Fibonacci recently took advantage of the predictable meta and built a Control Warrior deck that did very well against Aggro Shaman.

We believe that it’s important to let good players recognize shifts in the meta, and capitalize on their knowledge before the meta shifts and the ‘solution’ changes. This is one of biggest reasons why we don’t nerf cards very frequently. When metas stagnate for too long; When there are no good counters; When the best decks aren’t fun to play or lose to; these are all reasons we have made balance adjustments in the past. If a deck is popular for a few weeks, that isn’t a reason to make a nerf on its own. We’d have to be concerned about the fun, not be seeing any emerging counter-strategies, or be far enough away from a new content release to be worried about stagnation for a long time.

So that brings us to today. Another consideration for making a balance adjustment is planning around a client patch for each of our platforms. We are working on the ability to stream balance adjustments (and other content) directly to players’ devices, but until we have that ability, we need to release a client patch to make a change to a card. Our next patch is planned for around the end of this month. You can expect an announcement from us regarding balance changes either way in the week or so leading up to that date.