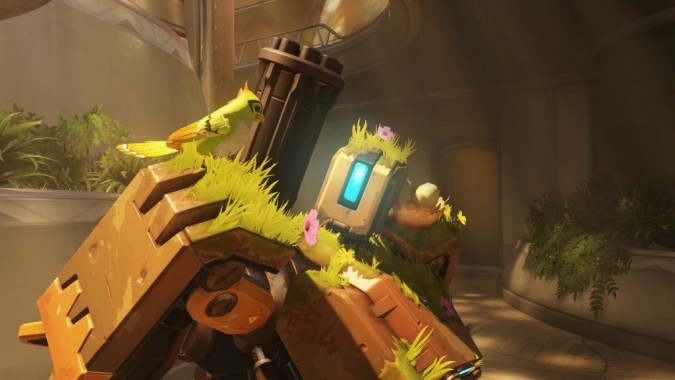 A new patch has hit the Overwatch PTR server introducing a new search feature for custom games, a way to radically customize games, and a few hero changes as well. As promised in yesterday’s dev video, players will be able to search for custom games with the new Server Browser so they can find exactly the kind of game, map, or team they want to play with.

Game customization will hit all new heights with the ability to turn on and off hero abilities, adjust their cooldowns, or flat out ban certain heroes from your map. The seasonal event Capture the Rooster is also becoming a permanent part of the game with the addition of Capture the Flag in Arcade Mode, and will be receiving 9 additional maps.

On the hero side, Bastion is getting massive changes to make him more durable when he is mobile (his Recon mode) with the ability to heal on the move and still be strong when in Sentry mode. Mercy got an interesting buff and is now invulnerable while using her ultimate to mass rez her team, so she’s no longer a priority target when pulling her clutch move. It remains to be seen if this makes her a more viable pick in the game.

Starting today, every player can create their own, unique Overwatch experience and share it with their friends, their teammates, or the entire world. Introducing the Server Browser.

An extension of Overwatch’s Custom Game mode, the Server Browser allows you to adjust the settings on various maps, modes, and heroes, creating your own tailor-made server. If, for example, you want to increase Pharah’s missile speed or remove the cooldown from McCree’s Combat Roll, the power is yours. Once you’re happy with your settings and you’re ready to launch your game, you’ll need to set up the permissions. You can limit the number of people who can join your game by toggling the “Friends Only” or “Invite Only” options, but if you want to put your strange creation to the real test, set your server to “Public” and click the launch button.

The Server Browser is currently being tested, so we’ll be making changes throughout the PTR. Thank you for helping us test the feature, and we’re excited to see what you make of it.

Capture the Rooster has been, without a doubt, Overwatch’s most popular brawl. We don’t want that excitement to end, so we’re bringing Capture the Flag to the Arcade as an ongoing game mode. Starting today, we’re adding Capture-the-Flag versions of Nepal, Lijiang Tower, Ilios, and Oasis, which gives you 12 maps to try when creating a Custom Game.

Developer Comments: The goal of these changes is to move some of Bastion’s power from Configuration: Sentry to Recon, while keeping its sentry mode a strong option, especially versus tanks and barriers. Overall, Bastion should feel stronger and more flexible with these changes.

Developer Comments: Previously, there was a minimum distance a projectile had to travel before it could be destroyed by Defense Matrix. This made it nearly worthless in situations where an enemy was right next to your teammate, such as when Roadhog hooks your ally. This change removes that restriction so Defense Matrix should now reliably destroy projectiles regardless of how far they have traveled.

Developer Comments: Mercy’s Resurrect has always been very powerful, but it often forces her to sacrifice herself to use it well. There have been changes in the past that attempted to help her in this area, but haven’t done enough to solve it. This change means that once she uses the ability, she will always survive long enough to be with her team again.

Developer Comments: Once the offensive team gets through the castle entrance, the map becomes very heavily stacked in the defense’s favor. This change will give the offense more entrance options, which should improve the map’s overall balance.

Blizzard Watch is made possible by people like you.
Please consider supporting our Patreon!
Filed Under: Bastion, Mercy, Overwatch Ptr, Server Browser
Advertisement