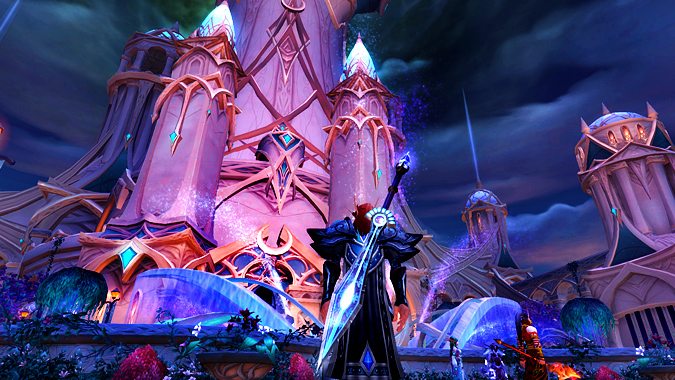 Nighthold is here, friends, and oh my goodness is it gorgeous. We’re just going to like, move in once we kick out Elisande and Gul’dan, right? I’m also a huge fan of how we’re more or less free to wander all over the place — it’s so much more engaging to explore what feels like an actual city, rather than just be shuffled from Boss Room to Boss Room.

Today we’ll be looking at how to do the first six Nighthold bosses as a Holy Paladin. These aren’t full strategy discussions so much as Holy Paladin-specific observations and advice. If you’ve got any Holydin tricks of your own, share your knowledge in the comments! 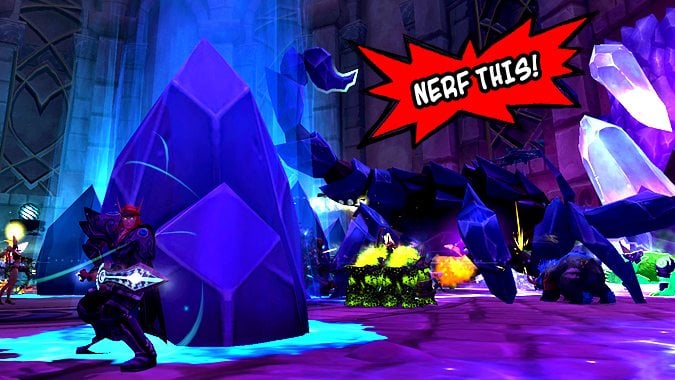 Skorpy Ron is the first obstacle we’ll overcome in our invasion of Suramar City. This big beastie’s mechanics are simple to deal with, but fairly punishing if people aren’t paying attention. Avoid Focused Blast, and as soon as Skorpy Ron spawns some Crystalline Fragments, duck behind one so you’re safe from Shockwave. You actually get a debuff called Broken Shard whenever you’re safely behind a crystal, so if you use WeakAuras it’s easy to set up a simple alert letting you know if you’re in a safe spot or not.

Arcanoslash can hit the main tank rather heavily, and too many Scorpids can be nasty for the off-tank, so don’t hesitate to throw out heavy heals in these moments. Otherwise, this is a pretty straightforward fight for us. While I won’t be mentioning every piece of Nighthold loot, Skorpy Ron does drop Leystone-Toe Kickers, which are pretty nice for us.

Aside: Overwatch players, ever notice how Shockwave — and how you avoid it — is basically D.Va’s Self-Destruct ultimate? If you want to have some fun with it, here’s a simple WeakAura string that will cause Shockwave to be accompanied by an all-too-familiar call of “NERF THIS!” each time it happens. Windows users will just need to put this audio file in the following location: Interface/Auras/DVa – Nerf This (Sound).ogg. (The file path may be different for Mac users, but just edit the WeakAura string to match and you should be fine.) 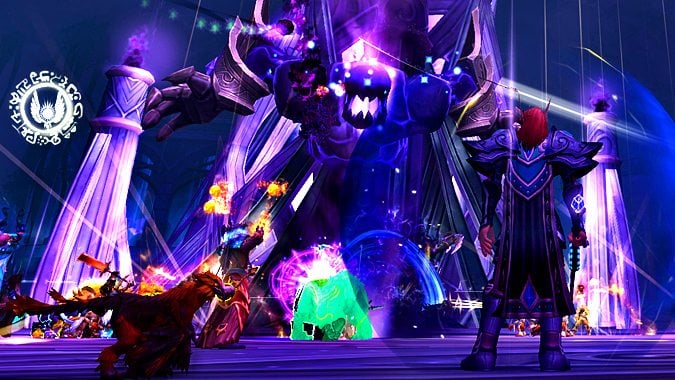 I love that Chronomancy is a recurring theme in Nighthold, first here with the Chronomatic Anomaly, and later on with Grand Magistrix Elisande. It’s funny how even basic mechanics we’ve seen countless times before are suddenly dangerous and stressful again, simply by increasing/decreasing their speed.

That being said, Chronomatic Anomaly is a fairly generic fight for Holy Paladins, in that there’s very little that aligns with our specific strengths. We can stun Fragmented Time Particles to interrupt Warp Nightwell, and Aura Mastery is a great way to counter raidwide damage from repeat Warp Nightwell casts, Temporal Orbs during Fast phases, or Power Overwhelming. Otherwise, it’s just a case of dodging the various orbs, running Time Bombs out of the raid (this mechanic doesn’t exist in Raid Finder), and power healing through the Time Release healing absorption debuffs. 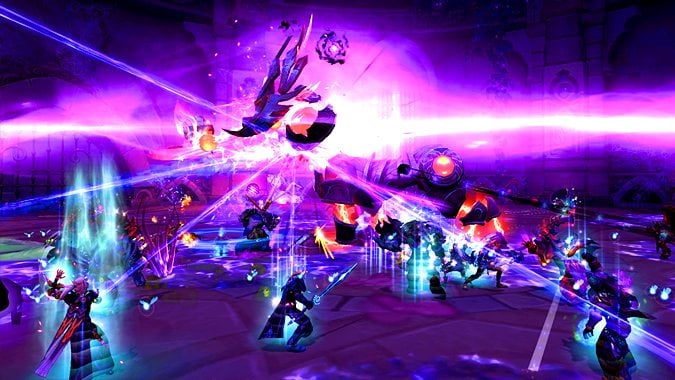 From time magic to cake magic? Oh Nighthold, you’re too good to us.

In addition to being hilarious (be sure to listen to this malfunctioning robot’s voice lines), Trilliax is a fight that can get rather messy, very quickly. We’re decent choices to gobble up Toxic Slices during the first Cleaner phase, since there’s not much damage to heal yet, allowing your DPS to focus on Trilliax. However, in later Cleaner phases there’s the potential for heavy raid damage depending on how well everyone is handling Trilliax’s mechanics, so it’s best to let others handle Toxic Slices, unless one happens to spawn right next to you or something. Leave Succulent Feasts for others — the shield granted by feasts allow people to safely jump on/destroy Scrubbers that are casting Cleansing Destruction, but we can always just Divine Shield if we need to take a Scrubber out.

Speaking of Divine Shield, you may be tempted to bubble through the scary-looking Annihilation laser, but really, it’s actually not very dangerous. As long as you’re hugging Trilliax’s side, the laser won’t touch you at all and all you’ll have to heal through is some minor damage from running through Arcane Seepage pools.

Trilliax is a great choice for bonus rolls, as it drops Construct Personality Sphere (the only Nighthold relic that buffs Shock Treatment), our tier cloak, Perfectly Preserved Cake (a strong trinket, as long as you can ensure the shielding isn’t being wasted — use it before spikes of raid damage), and two more pieces with Critical Strike. 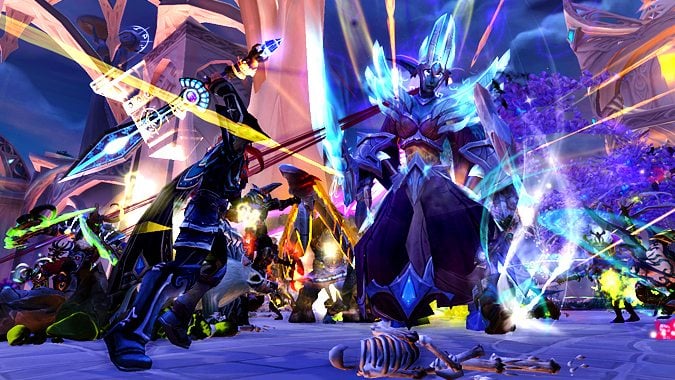 Spellblade Aluriel is a hectic fight with many different abilities, but when you realize that most of her mechanics are basically variations on don’t stand in the bad, everything becomes much more manageable.

The most unique (and perhaps most punishing, if not handled correctly) threat we’ll have to deal with is Mark of Frost. Between Knight of the Silver Hand and Divine Protection, we’re well equipped to hold onto this debuff for a while. Just be sure to pass it on to someone else before the Frostbitten stacks get too high. We can also completely ignore Mark of Frost by bubbling through it, but I prefer to save bubble for emergencies, given how chaotic the fight gets in later phases.

There’s a lot of running around to dodge bad stuff in this fight, so get good use out of Light of the Martyr and Divine Steed. Pay special attention to players who have Mark of Frost or Searing Brand, and save Aura Mastery for the unavoidable raid damage of Detonate: Arcane Orb.

Notable Holydin loot from Aluriel include Spellblade’s Gemmed Signet and Duskwatch Plate Bracers. Aluriel’s Mirror is okay, but without Intellect or Crit, I’d let another healer take it over us. 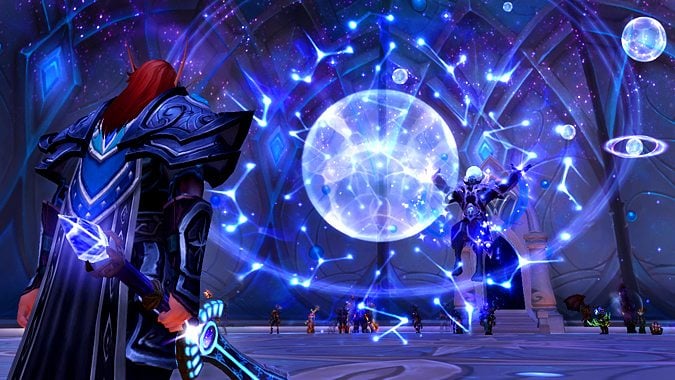 I love Star Auger Etraeus. He has the best boss room since Algalon, his voice lines are so delightfully star-themed, and ultimately, he’s just this massive astronomy nerd. It’s great.

Melee Holy Paladins get to take it easy in Etraeus’ first phase, as he won’t target us for Icy Ejection. This means we can park ourselves behind Etraeus and never have to move at all. Ah, the luxury! Of course, since the other healers will often be busy running their Icy Ejection debuffs out of the group, it’s our job to make sure they (and anyone else) are fully topped up so Icy Ejection’s detonation doesn’t kill them.

Etraeus’ second phase is…well, it’s a mess. Fel Ejection and Felflame are not overly complicated mechanics, but in my experience that room fills up astoundingly fast with green fire patches everywhere. Many players run like crazy when they get Fel Injection, but this just spreads the felflame pools everywhere. It’s much better to wait until Fel Ejection spits a pool at your feet, then calmly step aside and wait for the next one. (You have a second or two to move away from a fresh pool before you take any damage.) This way, you can contain the Felflame and overlap the pools, keeping more of the room clear.

In Etraeus’ last phase, DPS the Thing That Should Not Be with everyone else. There’s not much damage until the end of this phase, so chipping in as much DPS as we can early on definitely helps. As we turn away to avoid Witness the Void, use that time to toss a few heals, or remember that we can still hit the Thing when it’s behind us with Consecration or Blinding Light. Save cooldowns for Witness the Void casts late in the phase, when it’ll be dealing the most damage. 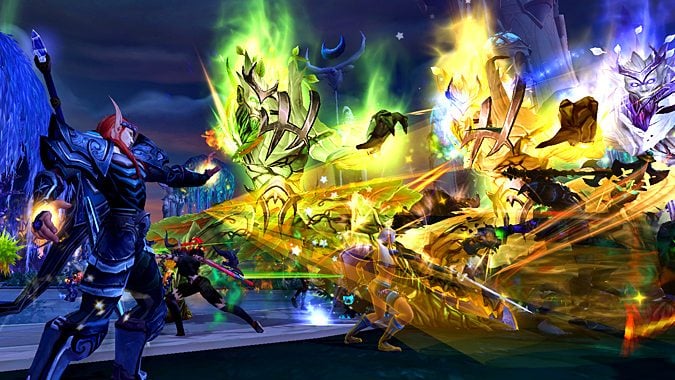 The Tel’arn encounter starts off fairly tame, but there’s a lot going on by the end, and it’s easy to get overwhelmed with all the different mechanics that are all going off simultaneously.

Beacon of the Lightbringer and Light of Dawn aren’t great on this fight, due to how spread out people are. On the flip side, there’s a lot of tank damage to deal with, so Beacon of Faith is an excellent replacement.

There’s not much else specific to Holy Paladins to be aware of. Avoid damage from Solar Collapse and Controlled Chaos, dispel players with Parasitic Fetter, (and stun the resulting Parasitic Lashers if necessary), use defensive/healing cooldowns for the third/final Plasma Sphere detonations, and buddy up to people to counter Call of Night in the last phase. We can also Divine Shield to clear out numerous Toxic Spores in the last phase, if they start becoming a problem.

Tel’arn drops a nice helmet and shoulders for us. He also drops Parasitic Spore, but since we only get one Life relic slot, I’d hold out for Trilliax’s Construct Personality Sphere, personally. 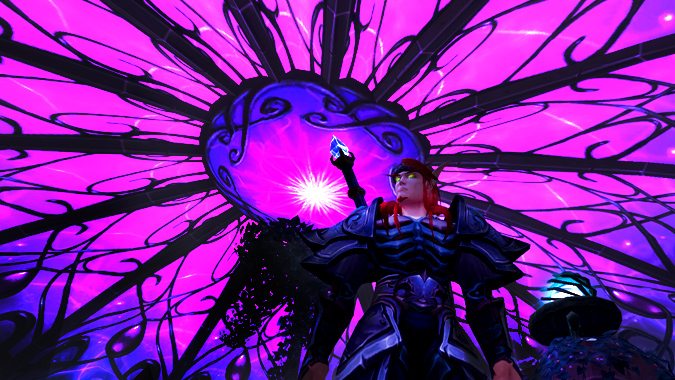 That’s it for the first two wings of Nighthold! Next time we’ll tackle Krosus, Tichondrius, Elisande, and of course, the big green meanie himself, Gul’dan.