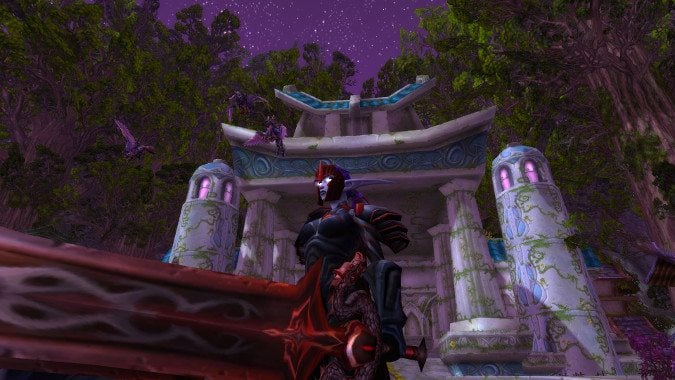 I like going back to Darnassus on my Nelf Warrior from time to time and imagining how completely boring she finds the place. Plus, it’s a brand new city by Night Elf standards. I mean, they just grew that giant tree after the Third War. It’s not like she (or any Nigh Elves, really) grew up there or anything, the buildings are either new construction or likely ruins that were off the coast of Kalimdor and raised by Nordrassil when it grew. Considering my Warrior is neither a Druid or a Priest, I get the feeling she views the city as a memorial to the Third War more than an actual home.

But it’s pretty and there are other Night Elves there, so heck, why not visit when she gets homesick?

What character do you see becoming a major player in the upcoming WoW story?

Besides the obvious ones?

Keep your eye on Velen. If we go to Argus in 7.3 and it plays a part in the next expansion, Velen has one of the best ways to get there and back, he’s got the motive to go there and he’s suffered a recent loss that compounds every other loss he’s suffered for the past 25,000 years. Nobody on Azeroth — not Sylvanas, not Jaina, not Anduin, nobody on Azeroth has suffered so many losses as Velen. The soul of his people, his two closest friends, his family, his homeworld, many of his followers, all stripped from him time and again. What’s left of Velen is a core of steel because that’s all that could possibly endure.

Velen is someone to watch in the future. The Velen we saw on Draenor was capable of stepping into a void Naaru and sacrificing his own life to purify it, and this Velen has lost even more than that guy. Do not be surprised at the depths of his resolve.

With Legion, we’ve had post-Cat 1-60 world as long as we had the pre-Cat 1-60. Think this (or Northrend/Outland) will be updated next expansion (or ever)?

Updating World of Warcraft in Cataclysm has led to a whole host of issues. Was it necessary? Probably. But players then and now have found a whole host of complaints and problems with the update, from the ‘legacy servers’ movement to people complaining about flight in Azeroth to the issue of split focus in Cata, to the point where the majority of players thought the expansion was short on content because they didn’t play through a lot of it.

I would be extremely surprised if Northrend, Pandaria, Outland or Draenor ever saw updates. Previous expansions will endure as time capsules that show the progress of the game over the course of its existence. The investment cost of updating old content isn’t worth it when you could make all new current content instead.

Leveling a Dranei Paladin through Hyjal and I came across a satyr named Tyrus Blackhorn.

Q4theQ: Is this the first time we see Ol’ Tyrus in game or in the books? I end up setting him free (Oops!). Do we see him at all later?

It might be a great cameo to see him in our current invasion.

That’s Tyrus’ only appearance to date. It’s really a shame considering what an evil, manipulative slimebag he is that we never see him again, especially with all the Satyrs running buck wild in Emerald Nightmare I think Tyrus would have made an excellent boss in that place. Ah well. We’ll see him again sooner or later I’m sure.

QFTQ: Have you seen that awesome new WoW video? The Craft of War: BLIND.

Yeah. I thought it was pretty good.

QFTQ: I was wondering where you thing the ending of the Exodar scenario is going to lead to. Meaning that if you hang around after you defeat Rakeesh some other NPC’s show up and this dialog takes place…

Divinius: We came as soon as we were able. Thank the Light that you are safe, prophet!
Prophet Velen: I am neither prophet nor pawn, not any longer.
Prophet Velen: Did Ramuul survive?
Divinius: Grand Artificer Ramuul yet lives, sir!
Prophet Velen: Good. Find Ramuul tell him to begin repairs on the vessel. We are going home.

Well, I answered this (kind of) in my first answer, but I wanted to mention that I hope Divinius shows up again. Since her name is clearly taken from the word ‘Divine’ I’m hopping that it’s an assumed name and that Divinius is either our timeline’s version of Yrel or, more likely to me, her elder sister Samaara. If you compare this picture of Divinius to this picture of Samaara, they have similar faces and horn patterns. (Yes, I know this is because there are only so many Draenei face models.)

Basically I’d take any excuse to get Yrel back in the game. I really liked her character development in Warlords and would love to see her pop up again, especially as a kind of payback for our help when the Legion invaded her world. So if Velen takes the Exodar back to Argus, I’d like it if we saw more Divinius and maybe that could lead to a Yrel cameo or even a full fledged storyline for her.

Nightborne as new race, how should you design the starting zone?

Okay, seriously, I would likely set the entire thing in an instanced version of Suramar City post-Legion invasion, with players taking on the role of young Nightborne who want to get out and explore Azeroth after 10,000 years of cultural stagnation and see what they can learn from the other races of Azeroth. I’d likely make them similar to the Pandaren in that I’d make them available to either faction — some Nightborne would want to rebel against their society and see the Night Elves as their natural allies, while others would be far more comfortable with the Blood Elves as fellow descendants of the ancient Highborne and lovers of the Arcane.

So I’d do a 1 to 15 zone built around Suramar City and close environs, an urban experience based not on calamity (like Gilneas was) but on trying to find your way in a world you have very little idea of. Around level 15 you’d finish up the city storyline and decide between Horde and Alliance, and be sent to either Darnassus or Silvermoon to make contact with ambassadors and start your new life as a emissary to the faction of your choice.

Q4Q: Is Hearthstone something you’ve found more appealing since your eyesight has started to wane?

I’m not big on TCG’s. I totally missed out on the whole Magic thing back in the 90’s, I wasn’t a big player of the WoW TCG and I’m not terribly interested in Hearthstone. The fact that I’m going blind hasn’t changed what I like, it’s just made me realize I’ll only get to like it for a limited time.

I like watching other people play Hearthstone but I have minimal interest in it myself.

Blizzard Watch is made possible by people like you.
Please consider supporting our Patreon!
Filed Under: Nigh Elves, Nightborne
Advertisement