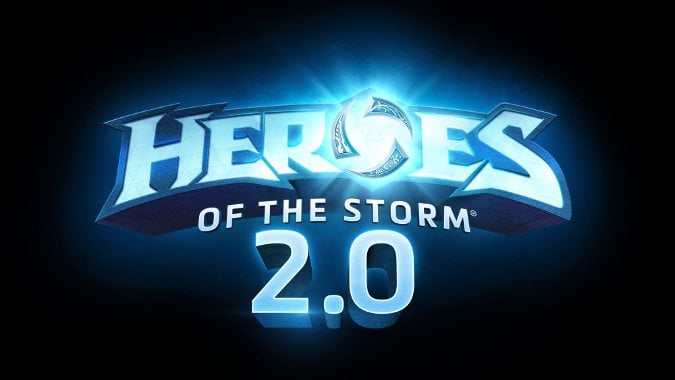 Heroes of the Storm is sending its latest update into open beta — an extended, 4-week-long testing phase. This update is being dubbed “Heroes 2.0” and includes the highly anticipated overhaul of the game’s progression system. In addition to the new progression system, Heroes 2.0 completely overhauls the functionality of the in-game shop and adds a variety of new cosmetic rewards.

Everything included in Heroes 2.0 is built upon the new leveling system. Previously in Heroes of the Storm, the progression system hit a dead end early on. Early levels were used as a hand-holding mechanic, blocking off features or talent sets until you grew more accustomed to the game. Afterwards, there were precious few rewards for leveling — and what few rewards existed quickly dried up.

Heroes 2.0 both accelerates how quickly players level up and introduces a new reward system. Every time you level up a character, you’ll receive a Loot Chest, which we’ll outline in detail below. Player Levels have functionally ceased to exist; you no longer increase your Player Level separately. Instead, your Player Level is the sum total of all levels earned across all of your characters. The XP required to level a character slowly ramps up between levels 1 and 12, but from level 12 onward, the XP required for each level is the same. The developers stated earning a level will take roughly 2-3 hours of play.

If you’ve been playing Heroes of the Storm all along, have no fear: You won’t lose your current progress. All XP gained across your current roster of heroes will be converted to the new system. Due to the new leveling curve, your characters will be higher level in Heroes 2.0 than they are right now, in fact. If you’ve managed to level a character to 20 in the current game, that character might end up somewhere around level 55 in the new system. Heroes 2.0 has no level cap, meaning you can level your favorite heroes forever and continuously earn additional rewards. 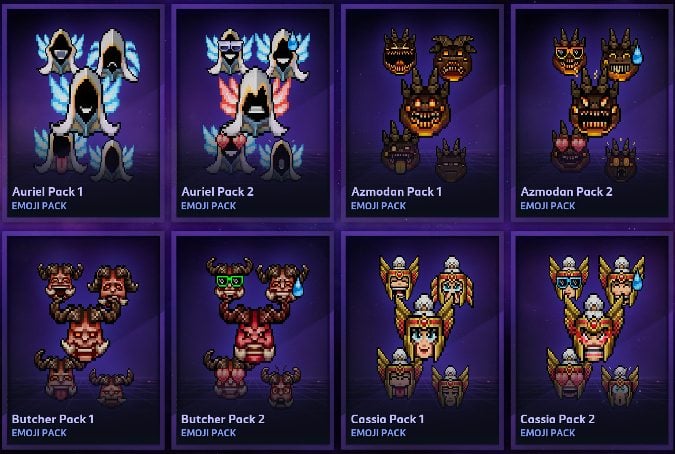 Sprays are functionally identical to sprays found in other games such as Overwatch. They’re a small decal you can place in the game world whenever you’d like. While Heroes of the Storm players have utilized the B-Step (spamming the hearthstone hotkey to create the Heroes of the Storm logo beneath your character’s feet) for moments where you’d typically use a Spray in other games, you’ll actually be able to use a Spray now.

Banners are flags which are automatically placed in the playing field upon capturing points of the map: Forts, Keeps, Mercenary Camps, or a map’s unique objective. They behave as if you’ve left your calling card behind after completion of a dastardly deed. There are character-themed banners, but if you’re concerned about your banner giving away your position, you don’t necessarily need to equip an Illidan banner as Illidan. You could use a Zerg-themed banner or even a different hero’s banner instead. 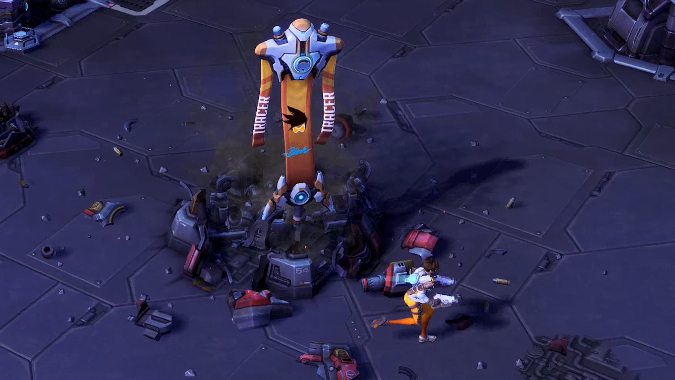 Announcer Packs change the Heroes of the Storm announcer lines to a hero of your choice, provided you’ve unlocked it. If you’re tired of hearing Captain Blackheart, replace him with Diablo, Brightwing, or Li Li. However, there’s a caveat: map-specific objective callouts retain their original announcer. For clarity’s sake, Blackheart will still call out spawning chests, the Raven Lord will still call out tributes, and so forth.

Voice Lines utilize Heroes of the Storm‘s oft-forgotten Taunt mechanic. If banners and sprays aren’t enough gloating for you, you’re able to unlock voice lines you can use to taunt your enemies. Earned a sweet kill? Rub it in a little.

Emoji Packs are obviously the real highlight of these new customization options. Every hero in the game has their own set of emoji which can be used in in-game chat. Heart-eyes Sylvanas? Yep!

With all of the new customization options, Heroes 2.0 has implemented Loadouts for ease of management. In the Heroes of the Storm we have now, you choose your skin and mount before entering a match. Loadouts work similarly, but you’re able to choose your Skin, Mount, Banner, Spray, Announcer, and Voice Line and save up to three Loadouts per character. 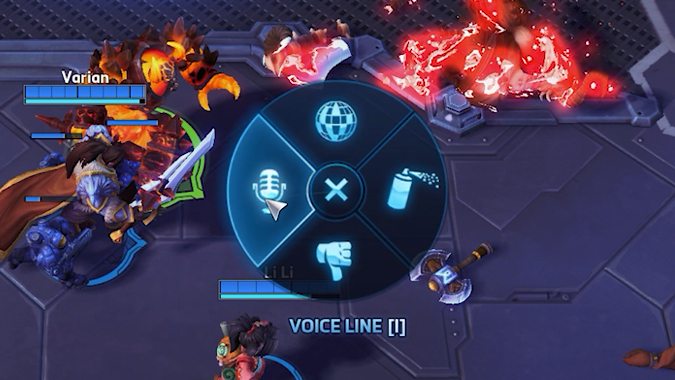 Heroes 2.0 also introduces a new social radial menu in addition to the existing ping menu. You can use your voice line, spray, and so forth all through the new radial. 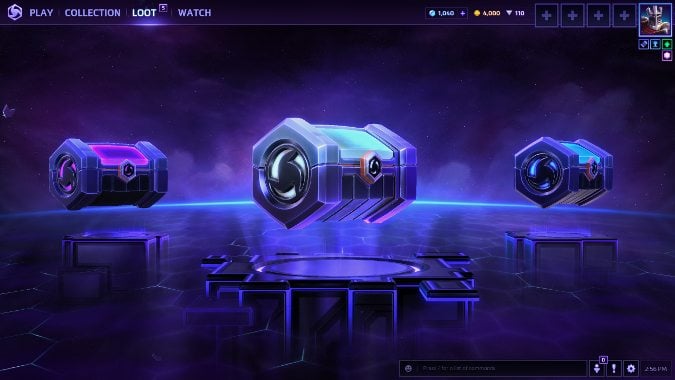 Heroes of the Storm is transitioning the vast majority of its rewards into Loot Chests. As you increase your player level (which is now based on hero levels), you’ll receive standard Loot Chests. Loot Chests of higher quality arrive in differing intervals. For example, every 5 Player Levels, you might receive a Rare Loot Chest. Every 25 Player Levels, you might receive an Epic Loot Chest. While leveling individual heroes, you’ll continue to earn gold and portraits — but you’ll also occasionally earn hero-specific Loot Chests. While playing Kerrigan, you’ll earn a Kerrigan Loot Chest. That Kerrigan Loot Chest is guaranteed to contain at least one Kerrigan-specific item.

Loot Chests can contain a total of 4 of any of the following:

With the transition to Loot Chests, there’s one major difference in regards to skins: Different tints for the same skin are no longer earned via leveling up. Each tint is considered a different skin for Loot Chest purposes. However, whatever tints you have unlocked prior to Heroes 2.0, you get to keep.

Many of these cosmetic rewards can only be earned via Loot Chests. Duplicate items are turned into Shards which can be spent on items directly, however. Even if you don’t get what you want out of a chest, you can build up Shards toward buying it outright. 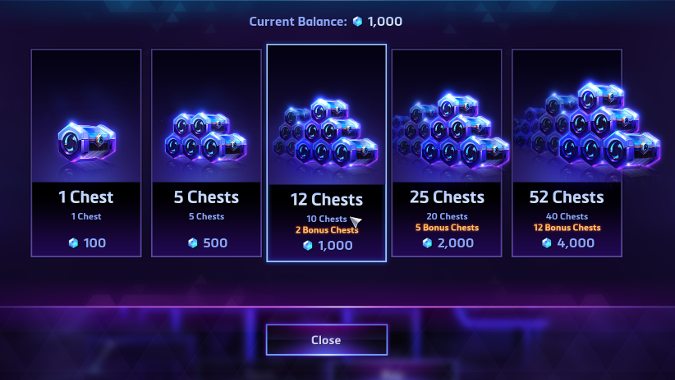 Shards are only one of three currencies used in Heroes 2.0. Gold remains, primarily used for buying new characters, but Heroes 2.0 also introduces Gems. If you’re played other Free-to-Play titles, you’ll be familiar with the concept. Rather than buying items directly with real money, you first buy Gems with real money which you then spend on in-game items. (Yes, you can use your Blizzard Balance funds to buy gems.) From what we’ve seen, you’ll be able to purchase the following with gems:

The only skins you’ll be able to directly purchase with Gems are Featured items. Featured items will include the latest skins added to the game and a rotating selection of older skins. Any skins which are not Featured will only be able to be acquired through Loot Chests. Sprays, Voice Lines, Announcers, Banners, and Emoji can only be acquired through Loot Chests.

The “Heroes 2.0” terminology is definitely a marketing angle and I don’t expect we’ll be calling Heroes of the Storm by the name Heroes 2.0 indefinitely. The developers hope players who checked out Heroes at launch and gave it a pass will come back and see what the game has to offer now. Since launch, the game has added tons of heroes, many new maps, new features, and new ways to play. The game’s previous major patch overhauled the in-game UI and what’s being called Heroes 2.0 overhauls the entire storefront and progression system. It’s simply not the same game it was two years ago and Heroes of the Storm doesn’t have huge expansions to lure people in for a fresh look like World of Warcraft does. While “Heroes 2.0” is pure marketing, it’s warranted.

The new progression system and all of the new cosmetic awards are all really fun. I’m a Grumpy Gus and I’m not hip with the emoji, but everyone in attendance when this information was announced was thrilled — including me. It’s a cute little thing and it’s hard to hate it. They’re a great replacement for ASCII shorthand. Things like banners and sprays aren’t exactly game essential, but they’re fun to play with. If Overwatch can do it, Heroes can do it.

Personally, I’m most concerned about the transition to gems. I think most gamers have been burned by enough F2P games to have a deep, visceral reaction to even seeing the word gem in a video game. It’s easy for games to abuse these currency systems. Whether or not Blizzard will fall into that trap, we’ll see. At the moment, the baseline prices for many items appear to have been slightly reduced in the transition from cash to gems, depending on your particular region. And given everything that can be purchased with Gems can also be found in Loot Chests which you’ll be receiving for free on a regular basis simply by playing, I’m cautiously optimistic. 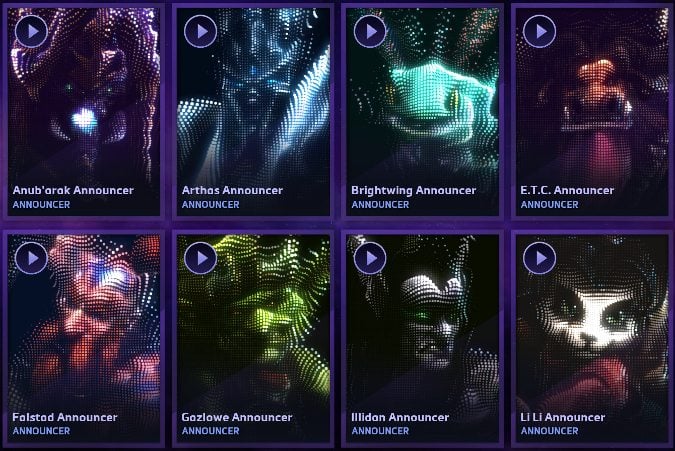 The real sticking point is skins being rolled into Loot Chests. Limiting which skins can be purchased outright seems like a step backward. Often, I’ve bought a skin on a lark because I picked a hero I didn’t play often, realized I enjoyed it, and and wanted to customize a little. If I can’t go straight to the store and buy it, instead needing to gamble on Loot Chests for the chance of getting it, that could result in spending less money on the game rather than more. I’m absolutely not going to buy Loot Chests on the off-chance it’s going to give me the one item I want. Items like emoji and announcers being exclusive to Loot Chests — that’s fine with me. They’re new rewards for a new system. They can distribute those however they’d like. Walling off skins that previously weren’t, however? That, to me, is a problem.

Heroes 2.0 isn’t launching today. It’s entering an open beta phase expected to run for four weeks. The matter of pricing is something we’ll be able to see for ourselves almost immediately. If the prices aren’t right, we’ll know in short order. If something else isn’t working, hopefully the developers will take that feedback to heart.

Don’t miss out on Cassia the Javelin Amazon coming soon to Heroes of the Storm.