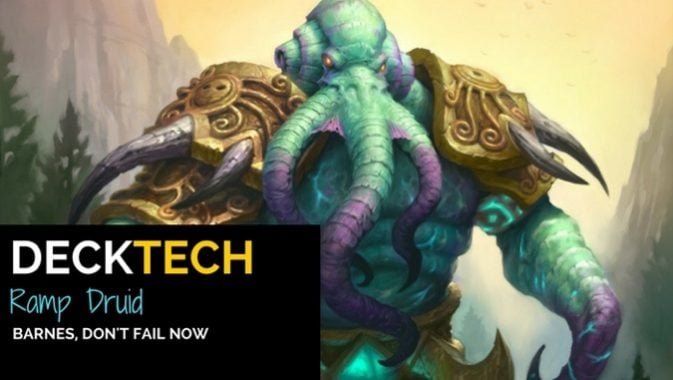 While Cavern Rogue and Time Warp Mage are emerging as competitive decks, we’re going to shift away from that for a moment. At the heart of Hearthstone, it’s all about having fun. Today we’re going to examine one of the more fun decks during this period of uncertainty in Journey to Un’goro as the metagame starts to stabilize. The list we’re going to look at is Fr0zen’s Ramp Druid. There’s 7 legendary cards in here!

You absolutely need to mulligan and find some kind of ramp (Wild Growth, Jade Blossom, or Innervate). If you don’t, you’re not going to last long. The Dream™ is to hit an Innervate and a Barnes. The better Dream™ is to play Innervate, drop Barnes on turn 2, have him fetch a Y’Shaarj who pulls another Y’Shaarj at the end of your turn. Naturally, the odds of that happening are slim.

Aside from that, you need to find some ramp pieces to help you accelerate into your threats early. Nourish can be played on curve to mana up or late game to hit extra cards and threats.

Your openers are straightforward. Hit your Wild Growths, Jade Blossom, and Mire Keeper to begin accelerating fast. You don’t exactly have much of an early game to begin with. Wrath and Swipe can help you stabilize the board as you develop your mana.

Moonglade Portal can help restore your health, but don’t forget you can play it on any existing wounded minions to get their health back up (and more importantly, out of Execute range). By this point, you’ll ideally be ahead of your opponent by one or two mana crystals and can start dropping your big legendary minions and assert control of the board. 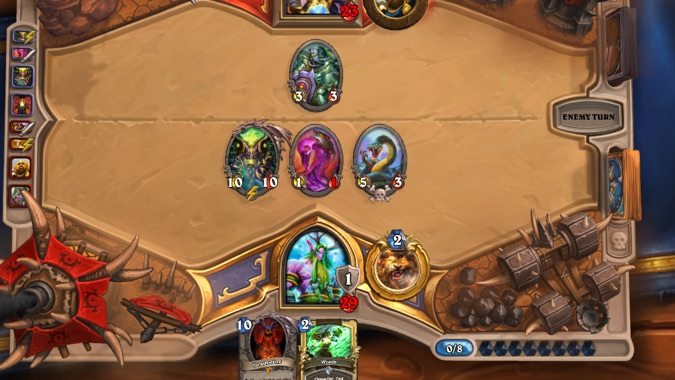 Please go after the Giant Anaconda. Although with my luck, there’s an Equality/Consecration waiting.

Late game is all about powering out your big guns and going right for the face. Let your opponent worry about trading their small minions into you. Put the pressure on them. Close out the game quickly and prevent them from possibly finding outs that can wipe out your game plan.

I make a slight modification to the list with the inclusion of 2x Earthen Scales. I find it provides more stabilization power especially if you can hit one of your large minions with it. You’ll put the game quickly out of reach when you end up with something like 12 additional armor (or another ridiculous amount). You can drop the Jade Idol and one of the Primordial Drakes for it. 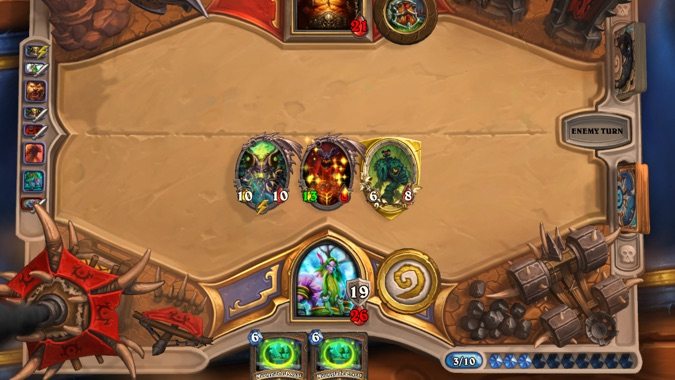 Taunt Warrior’s not going to be able to break through this. Especially not with Earthen Scales on Deathwing.

Druid: With Druid classes, there’s the mirror matchup and I think it’s going to hinge on who finds their Y’Shaarj or Deathwing first. Just make sure you play Deathwing second. The other Druid list that’s been making the rounds is an updated token Living Mana water Druid deck (and we need to come up with a shorter name). That one’s a little more overwhelming because if you don’t have a way to respond or stall their minions, you’re going to get run over easily.

Hunter: No one’s broken quest Hunter yet despite fears. There’s a Midrange variant that’s still being refined with Jeweled Macaw and Crackling Razormaws. This one surprised me, but Nesting Roc is an MVP in the list due to it’s ease of being able activate the taunt. While it may not be common yet, be prepared for lists to run 2x Hunter’s Mark.

Mage: Solitaire Time Warp Mage has been broken! I did not expect it to be cracked so early. They stall out as long as they can in order to generate their win conditions. One of the lists relies on popping out a pair of Arcane Giants to secure the win while the other relies on infinite zero cost Fireballs generated from Archmage Antonidas. If you can create early pressure before they can collect all their combo pieces, you’ll have a chance. But between their Ice Blocks, Blizzards, Frost Novas, and so forth, you’d be hard pressed to get a turn in.

Paladin: Paladin decks are in an odd state right now. No one’s been able to break the Last Kaleidosaur. Other decks are just filled with assorted handbuff cards, Elemental cards, or midrange cards. Paladin will continue to be refined for the awhile until one emerges as a clear favorite. My money is on an Elemental Paladin, but we’ll see. In any case, Equality and Consecration or Wild Pyromancer is their main response against your big minions. Don’t over commit too hard until both Equalities are played.

Priest: I’m not quite sure how Deathrattle Priest is performing yet with Awaken the Makers. Your bigger minions can survive Dragonfire Potion. Shadow Word: Death will be reserved for anything they can’t deal with. Though if they play Curious Glimmerroot, they might not be able to guess what you’re using.

Rogue: Yeah, you’re going to lose the cavern Rogue matchup. If they trigger their Cavern quest on turn 4, just concede. Even if you get your taunts on board with some defense, their 5/5s are going to overrun them swiftly. Your only out here is to hit the Dream™.

Shaman: Murloc Shamans going to have a field day here as you don’t have many ways to contest their swarm. Hold the Swipes against Call In the Finishers. If they drop a Murloc Warleader or a Gentle Megasaur next turn, then you’re not going to have a good time. The control versions will feature Hex that are automatically going to target your Y’Shaarj.

Warlock: Disco Zoo (or Discard Zoo) has been pretty impressive to me so far. I managed to climb from rank 10 to rank 6 with it. I haven’t played Ramp Druid against it quite yet, but I imagine Zoo has the upper hand. However, if they can’t secure the game against you early, then you might be able to stabilize here. Wrath and Swipe are keys here in order to stifle their early offense. Aside from Flame Imp, Malchezaar’s Imp is a must-kill card here.

Warrior: Against Pirate Warrior, mulligan for Wrath, Swipe, or Feral Rage to give buy you time. You need to ramp into some kind of taunt minion to help you stabilize because if you don’t, you’re dead. Against Taunt Warrior, your minions are generally more beefy and can hold their own in a slugfest. Unfortunately, you’ll obviously lose in a Brawl. Try to keep some minions at full so the Warrior can’t just Execute them.

Tip: When playing against Warriors, play around Mortal Strike. That means getting their health down to 13 if you’re unable to finish them off that turn. I’ve lost too many games due to Mortal Strike comebacks.

Blizzard Watch is made possible by people like you.
Please consider supporting our Patreon!
Filed Under: Deck-lists, Druid, Hearthstone, Ramp Druid, Ysera
Advertisement