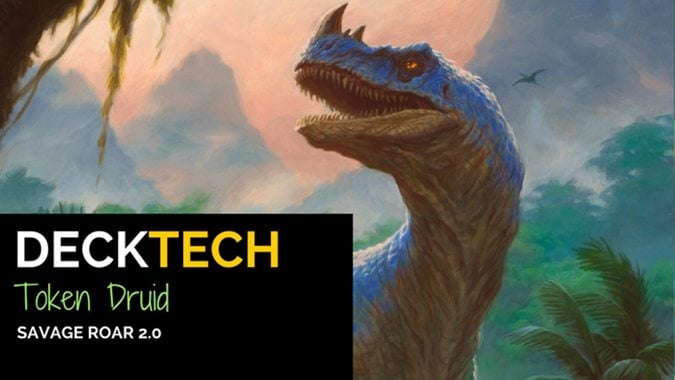 We’re to go slightly off the beaten path this week in our Journey to Un’goro. In May, players who reach the top 64 in the Wild game mode can qualify for an upcoming official Wild tournament. With that in mind, we’re going to examine a Wild deck today. Personally, I miss the old combo Druid deck with the old Force of Nature and Savage Roar combo. Today’s Egg Druid deck doesn’t quite recapture the feeling of finality from that combo, but it can still be quite effective in Wild.

I even managed to go 12-2 with it in last week’s Heroic Tavern Brawl.

🌿🌿 GO WILD! 🌿🌿 The top 64 from Ranked Wild in May can qualify for an upcoming official Wild Tournament! More info to come. pic.twitter.com/9iwyHKgGIT

The hardest part about dealing with the mulligan aspect in Wild is that there is a huge variety of decks. Thankfully, playing Egg Druid is pretty straightforward and you don’t need to worry about what your opponent has. Why play around Reno when you have a solid chance at defeating them before Reno is even a factor, right? In this case, look for your early 1 and 2 drops. Though if you can snag eggs, you’ll be in good position. Generally, I wouldn’t advise keeping eggs unless you have at least some way to buff them up.

Whatever you end up doing, don’t lose sight of the fact that your goal with this deck is to win fast. The longer the game drags on, the higher the chance of a loss. There’s zero draw here unless you can turn Finley into a Life Tap or if you pull out Jeeves.

Work on establishing board early. Use your coin to make the necessary tempo plays (such as bringing out an extra minion or buffing what you already have). Play your eggs if you happen to have them but only if you can buff them (Mark of the Wild, Mark of the Lotus, etc). Living Roots provides great flexibility in helping you remove threats. More often than not, if you’re missing those 1 drops, the Roots can provide those minions. 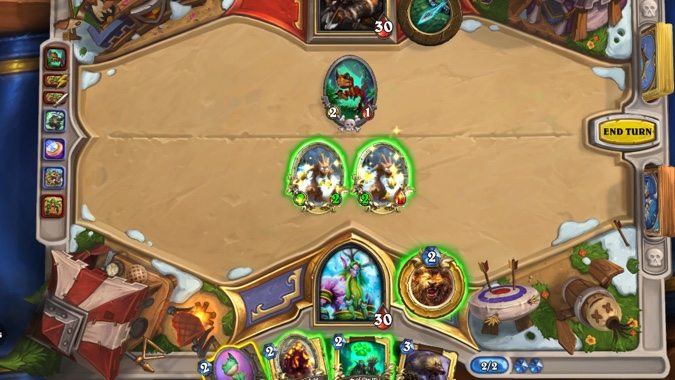 Keep playing minions as you get them and continue developing your board. Always assume you’re on the clock. Make smart trades and try to preserve minions. It’s okay to sacrifice one or two against any key opposing ones (like a Ship’s Cannon). By this point, you should start doing the math in your head and see if you can get your opponent down to Savage Roar or Evolved Spores range.

If you play Evolved Spores, here are the Adaptations you want to look for: 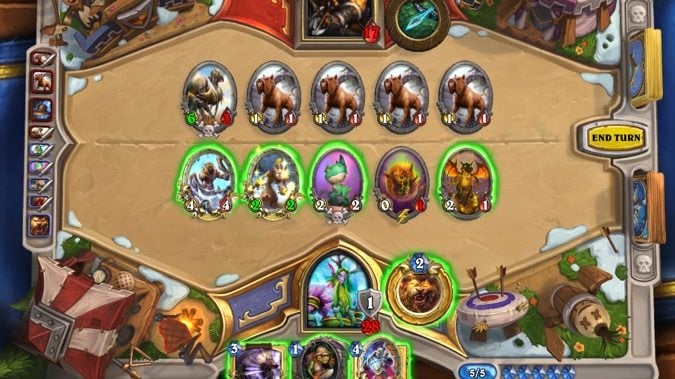 You have a few tools here to close out the game. Savage Roar should obviously be held in reserve until you can score lethal. If you drew one early, don’t hesitate to use it to force your opponent’s health down low even if you don’t have a massive board. I have to keep repeating this to some of the newer players. The game ends when their opponent’s health is at zero. Not everything needs to be done in a single turn. If you need to take 2-3 turns to chip and burst away at your opponent or eliminate a troublesome minion, then do it as you have many buff spells in the deck.

Although the list above doesn’t show Living Mana, I was experimenting with it. In the shot below, I almost played Living Mana without realizing that I had just drawn a Savage Roar. With my opponent at 13, Savage Roar combined with my hero power and the minions on board would be the exact amount needed for lethal. 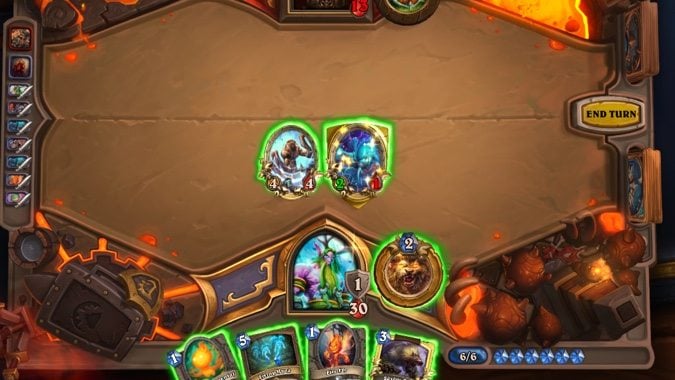 If you’re looking for some more affordable replacements, something like Frostwolf Warlord would fit right in. The Warlord can get massive, especially if your board has been left unchecked. You’ll notice I didn’t include Swipe in the original list and you’re probably wondering Matticus, did you forget Swipe?

This list just happens to heavily rely on minions to get going. If you’re in dire need of a Swipe, it means you weren’t able to contest and wrangle control of the board. That being said, Swipe is a good form of direct damage and can clear the way for your minions to get through. You can remove the Corsairs if you’re not seeing any weapon classes as much but if you do that, you may as well pull Patches entirely and switch off the pirate package. Innervate can potentially get you more of a board earlier in the game or allow you to play your buffs a turn ahead. Leeroy can also function as a finisher in this kind of deck (just due to the sheer reach he can provide). The Ravens though are some dank 2/2s that can be used in case you’re missing minions elsewhere.

I won’t be able to go too in-depth with possible matchups. You’re playing in the Wild format where every card is legal and decks can be wacky. In standard, you might have a good idea of knowing what decks are highly favorable in certain classes.

Druid: Egg Druid and Token Druid play similar styles. In games when my opponent tried to trade into my minions, but I went after their face, I usually won. My logic here is that if I can chip their health down low enough, I can burst them down. They’re going to try to do the same to me or attempt to trade into my minions to slow the bleeding. Get them into lethal range, and if you can draw into Savage Roar or Power of the Wild, you can secure the win quickly. Don’t trade if killing their minion spawns a more dangerous one (or multiples), but if you see an opportunity to remove a minion with no loss to yourself, do it.

Hunter: These guys are prominent and the one I’ve run into the most tends to be Midrange. Mad Scientist? Haunted Creeper? Piloted Shredder? Yeah, you might think it’s nice to see them again, but soon you’ll be cursing them like the old days. Explosive Traps and Freezing Traps will continue to protect them, so buff your minions and get them out of Explosive Trap range before attacking in. Go after any innocuous beasts before they get buffed up by a Houndmaster. Now excuse me while I go sit in a corner and deal with the memories of Loatheb on turn 5, Savannah Highmane on turn 6, Dr. Boom on turn 7 …

Mage: Lots of Mage variants. Is it Reno Mage? Could it be Secret Mage? What about Freeze Mage? The hardest part might be trying to identify the archetype before committing your resources. I discovered early that I need to play under the assumption that it’ll be a Freeze Mage which means committing early and getting as much face damage in as possible. Freeze Mage has many different ways to stall and slow down your offense as they draw out their combo pieces before dropping Emperor Thaurissan into play. Don’t be afraid to Savage Roar early (even with as few as 3 minions) to apply heavy pressure and get their health low.

Paladin: Secret Paladin and Control Paladin seem to be the strongest decks for this class. Secret Paladin hasn’t really changed much from the original inception. It still has powerful 2-drop Shielded Minibot and new friend, Hydrologist. If the game stretches far enough, you better have a plan for Mysterious Challenger, Dr. Boom, and Tirion Fordring. The Control Paladin variation fields N’Zoth, the Corruptor along with a host of deathrattle powerhouses like Sylvanas Windrunner, Cairne Bloodhoof, and Sludge Belcher. It’s remarkably resilient due to Forbidden Healing and Ragnaros, Lightlord. Close this game fast before their healing cards put a win out of reach. I recommend playing Rocky Carapace from Evolved Spores if Consecration hasn’t been used yet.

Priest: I haven’t encountered many Priests on the way up. Of the ones I do see, it’ll either be Dragon Priest or a Reno Priest. Dragons have the potential to stop you cold just due to the sheer number of taunts and large minions at their disposal. Even in a Control Priest, something like a Deathlord can mitigate any kind of offense. Velen’s Chosen on an Acolyte of Pain? Yeah, you’re not going to be able to answer that reliably. Have some way to answer Holy Nova.

Rogue: I can’t say much about Rogue as I haven’t run into many of these, either. Quest Rogue and Miracle continue to be the popular ones to beat (just like in Standard). Stick to your game plan and give yourself a strong board position. Burst them down with your buffs. They’re going to focus on trying to do the same to you.

Shaman: Aggro Shaman everywhere! Surely you still remember your pals Tunnel Trogg and Totem Golem. I’ve lost many games to an opponent who just highrolled a Crackle on me for 6 damage. That’s just plain frustrating. You won’t see that many new additions from Journey to Un’goro as Aggro Shaman continues to utilize the Jade package of Aya Blackpaw, Jade Claws, and Jade Lightning to powerful effect. Make sure your apply your buff spells to put minions out of range of Maelstrom Portal. Control Shaman is another popular archetype and they’ll eventually suffocate you in the end with cards like White Eyes, Sneed’s Old Shredder, and N’Zoth, the Corruptor. They have so many different ways to answer your board: Lightning Storm, Devolve, and even Volcano. Definitely one of the tougher matchups, I’ve found. Control Shaman is just an instant loss due to Healing Wave and Devolve, unfortunately.

Warlock: Hope you’re ready for the return of your friend Reno Jackson! Your tokens should have an edge here. Soul of the Forest should be played when you’re in a good board position for insurance. Warlocks have a number of ways to wipe out your board, so deal as much damage as you can right to the face. Games might drag out a little longer than expected due to the extra life gain options like Antique Healbot. I try to play this one like I do Freeze Mage and just go right for the face. Games can be won or lost by turn 6.

Warrior: Pirate Warrior reigns supreme in Standard. It gets even more ridiculous in Wild due to the addition of key Goblins vs Gnomes card Ship’s Cannon. Make it a priority to get rid of their cannons before it goes off. In most cases, they’ll hold a few 1 drop pirates and chain them in succession after their cannons are played. This matchup is going to be a race. Save Golakka Crawler for any of their big pirates. (Naga Corsair, Bloodsail Cultist, Dread Corsair, etc.)

Blizzard Watch is made possible by people like you.
Please consider supporting our Patreon!
Filed Under: Druid, Egg Druid, Hearthstone, Token, Wild
Advertisement