The Queue: It’s always about the Naga 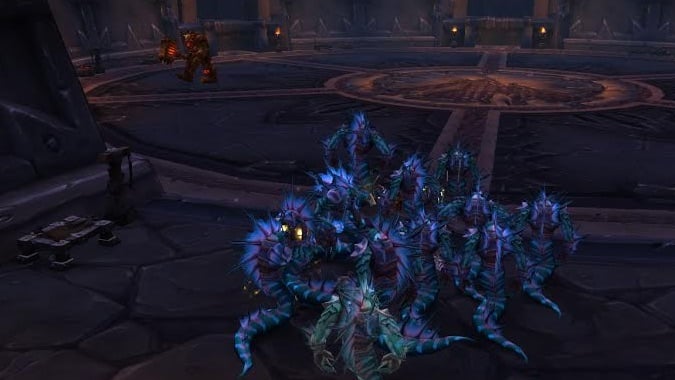 Naga as a future playable race is the World of Warcraft rumor that just won’t die… at least not until we have playable Naga.

And so we endure, somehow, through this dark and dire time in which we are locked into playing bipedal characters. Alas!

I’m often wrong when I make such statements, but I believe if naga were ever a playable race, they wouldn’t have their tail/leg combo. It would play too much havoc on gear appearance (already, some feet are weird based on the race). If we did have them, I suspect it would be an outside group, that have legs, but can turn into a single tail in some kind of swim form.

Follow up question, Naga play a big part in the demon hunter campaign. If we have playable naga, do you think they’d get demon hunter as a possible class?

Liz: Naga with legs may fix problems with armor, but they really lose their identity as Naga. Without their fishy attributes, aren’t you just playing another elf? I think that if we get Naga — and that’s a big if — they could just skip the leg armor. Easy, right? No big design changes, and it’s basically the Naga aesthetic, so why not?

Mitch: If Blizzard wanted to go that route with Naga, I think they’d just… call it something else. I think saying, “We’re finally getting Naga!… but also they’re kinda not” would upset a lot of people unnecessarily. If we ever did get playable Naga (in whatever form), I don’t think the Demon Hunters would care enough about them to actually teach them how to become a Demon Hunter. Also, if we get no-feet Naga, then the whole uber mobility of the class would probably play very awkwardly.

What if Blizz put in playable half-races?

We have known half-orc half-draenai, and half-human half-high (closely related to blood) elf. Even if these were the only two options they gave you. You could create a character, ostracized by both societies by being a half breed, start off like the pandaren in a phased zone talking about this, and then in the end they choose which faction they feel the most connected to.

It would introduce new races, fit with what is established in lore (yes, they’re rare, but there is more than one example of each), and could touch upon existing models with just some additions to it (as they did with demon hunters). How much of each race could be included in character creation (draenai body with orc coloring, human frame with long ears).

Mitch: I think it’s possible — and the ostracization angle gives them a legit story — but I’d almost like to see customization/sub-race options across the board instead of a few hybrids. It’s definitely a bigger undertaking, but it’s something players have wanted for a while. Plus, imagine if each sub-race had their own starting story for joining one side or another?

Liz: As cool as that would be, with so many combinations you’d have to bow to at least some practicalities. Maybe every half-race has the same starting zone. They’re all ostracized and stuck somewhere akin to the Wandering Isle or even the Death Knight starting zone.

Mitch: Me? I’m still holding out for Arakkoa.

Mitch: As far as customization goes, I’m guessing it wouldn’t be like a slider giving you x% one thing and y% of another.

Mitch: It would probably be a pretty usual WoW-race template with a few options that lean slightly to one side over the other but without that much distinction (like facial features and hair).

Q4tQ: What does a D3 Necromancer beta invite look like? Is there an email involved? Extra button on the launcher? I just now “created a PTR account,” bud should I also have some kind of indicator somewhere?

Mitch: The first thing you’ll probably notice is this on your launcher. 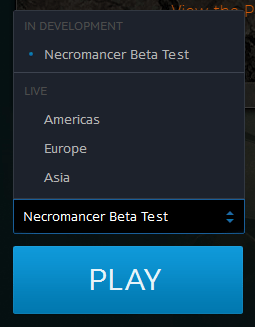 Liz: Though you should have gotten an email, too, the launcher is a quick way to check. Plus emails can be scams, so check the launcher and never click any links in an email offering you beta access.

Mitch: You do technically get an email and beta forum access, but they’ve been kinda slow on that front with this one. Basically, check your launcher regularly if you’re interested. Officially speaking, this is the Blizzard post on the matter.

Q4tQ: What’s the deal with Starcraft2?

Mitch: StarCraft is sort of in a weird spot. It’s a game that seems to have been built around the idea of it as “Blizzard’s esport title” only to have Overwatch and HotS both grab more attention. So its single-player mode can be totally great and enthralling, but then it’s done.

Liz: They did release the single player Nova mission packs, but they publicized it so little that I wouldn’t be shocked if the players who bought StarCraft but left when they finished up the campaign might not even know about it.

Mitch: From there, your options are competitive or co-op. I legitimately think co-op is the most underrated feature of the game, but overall, the game is not as newbie-friendly as other esports titles, which means a lot of people play it for the single-player and then call it quits. But it’s a long-time Blizzard IP, so they don’t want to let it die and, well, they’re trying. They actually do add a lot to the game, I think it’s just that people moved on from the game before Blizzard managed to get the word out about co-op.

Liz: They really need to do a better job of advertising the game’s new features. It feels like the quietest Blizzard game, but that’s not always because there’s nothing happening.

Mitch: I’m tired of invincible Star Child Illidan and remember back in my day how he got whooped at the base of the Frozen Throne. That’s the Illidan that charges into Hell going, “ERMAGERD DERMONS!?!?! I GOT IT!!!” and promptly dies.

Liz: Illidan is way outnumbered by the demons of the burning hells, too. Not even invincible Star Child Illidan could deal with that.

Blizzard Watch is made possible by people like you.
Please consider supporting our Patreon!
Filed Under: Naga
Advertisement