The Queue: Home is where the Jarod is 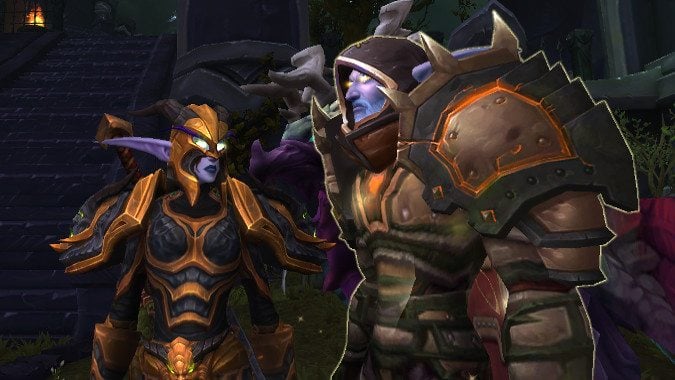 Seriously, I’m not saying my Night Elf Warrior is in love with Jarod Shadowsong.

I don’t have to because look at the two of them. I don’t think she could be more obvious if she said “Hiiiiii, Jaaaaarod” every time she saw him. Which she probably does.

Anyway, this is the Queue. I had a pretty hectic week launching the new book. Played some D3, spent some time failing to log into WoW today. What’ve y’all been up to?

Q4tQ: Seeing as a bunch of us hangout here in The Queue, is it possible to generate an automatic alert post when there is a new BW article?

I know there are other ways to track this (i.e. Twitter, Patreon, etc.), but thought it would be kinda cool to see it in The Queue. Even if it is possible, it’s probably more work than it’s worth. Just an idea.

I will mention it to Adam and see what he says.

With Black Temple Timewalking in sight, this feels like a good time to ask: was it ever explained what the deal with the Reliquary of Souls is? I feel like all the other bosses in the raid had some kind of buildup, thematically if nothing else – naga, demons, blood elves, fel orcs, Akama; all things we’d seen associated with Illidan throughout the expansion – and then that thing just kind of came out of nowhere.

Well, the Reliquary of Souls is directly over the font of arcane power Illidan was using to break the Illidari demons of their loyalty to the Legion, and it’s suspected to be related to his ritual to use many of the tortured souls of slain Draenei from Auchindoun to open a portal to Argus. Is that suspicion true? I have no idea. If it is, the Reliquary would be the container housing the Draenei souls in question.

Question: WoW has always been pretty. Even if some location are “pretty grim” I still find them visually impressive. I liked the variey on the Broken Isles, but at times the zones felt too far removed from one another stylistically. If you could pick a visual theme for the next expansion, what would things look like? Not the enemies or the threat necessarily, but the atmosphere and ambiance. What kind of settings would you ike to see the art team tackle?

See, just about every expansion WoW has ever had (and including vanilla, WoW in general) has had variety in zone design. Just using the Eastern Kingdoms or Kalimdor as examples, going north to south you’ll see wildly variant terrain. So I’m not sure an entire expansion with a theme would feel natural. But since you asked, I think I’d go with seascapes.

Not necessarily an underwater expansion, but I could absolutely be down for a South Seas/Kul’Tiras expansion that looked at real world atolls, archipelagos, peninsular regions and crafted something new for each. They’d be linked by being places in and around ocean, but they’d vary because there are a great deal of different kind of island habitats. You could have an arctic style rocky shore, a series of small islands, a volcanic set of islands being built up by eruptions, you could do a lot with it.

Q4tQ: Is there a chance for us to get answered here if we ask something on Discord?

You had your chance, Mythriak.

In a more serious vein, I guess I could start hanging out in Discord when I’m writing the Queue. Is that something y’all would want?

I’m mostly watching other people watch it, to be honest. Not much of a Blizzard presence that I’ve heard about, Anthem was a bit disappointing (and the news of no ME:A DLC made me unhappy) and Nintendo seems to exist in its own parallel universe where they can make weird games that utterly deviate from expectations and we all march to their feet to throw money at them.

Sony games on the PS4 might as well not exist to me. Never going to buy that console.

So, yeah. Not really caring about E3 that much this year. Wake me if someone announces Titanfall 3, well, besides Bioware.

Also, Liz isn’t here for today’s Queue (she’s got a lot on her plate) and so, I must inform you that the winner of your 2 Bosses Enter was High Overlord Saurfang.

Getting revenge on a bear at level 60? I won’t tell you what we called that *damned* gorilla that used to sit on road at the top of Stranglethorn and flatten every character I had when I wanted to get to Booty Bay. Every time I was anywhere near that stupid ape once I’d out-levelled the zone I would ride or fly over there and squash it flat. Caused much hilarity amongst the guildies for the level of venom I had for that beast. It got moved during Cataclysm and I’d like to think I did my part in getting that result!

I rolled my first Horde character, a Tauren Warrior, back at the tail end of Vanilla WoW. I did a lot of PvP on him, because everything was winding down and we were looking forward to the Burning Crusade. But before all that, when I was in the early levels and I went to Silverpine to do some quests, I ran into the Son of Arugal.

Not only did he kill me horribly, but he kept killing me every time I would manage to get back up and try and run away from him. Finally, after about ten deaths I managed to res far enough away from him that he didn’t aggro and I could run. (Remember, this was vanilla – no mount until level 40, no epic mount until 60, no flying mounts.)

You wouldn’t think I spent years hunting and killing those things whenever I was anywhere near Silverpine. You certainly wouldn’t think I kept leveling Horde toons just so I could murder Sons of Arugal more effectively.

But I did. Because that one SoA griefed me. And I’d be doing it now, except that they’re not in Silverpine anymore.

Okay, that’s the Queue for Wednesday. I’ll be seeing you guys again Friday. Take it easy.

Blizzard Watch is made possible by people like you.
Please consider supporting our Patreon!
Filed Under: Son Of Arugal
Advertisement