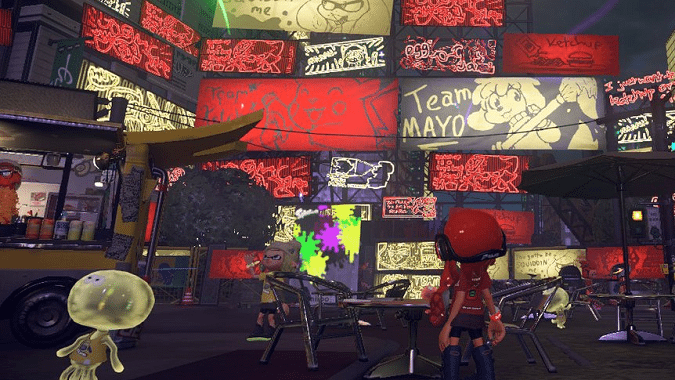 I spent a decent amount of this past weekend playing Splatoon 2 and taking part in the Splatfest. I was technically on Team Ketchup (which lost), but I never really have ketchup or mayo, so I didn’t have a whole lot invested in who won.

More to the point, the Splatfest — and the game in general, really — had some great music. It was also super cool to see nighttime versions of every single stage for the duration of the event. All in all, it was a lot of fun.

But enough about that, it’s time for… The Queue(ueueueueueueue)!

KALCHEUS IS DONE WITH THIS TRAGEDY BIZ:

Q4TQ: Forget “Most tragic” character for a moment here, let’s shine a light on which character do you feel has “triumphed through adversity” the most?

I’m not sure any one “big” figure jumps to mind here, but I did immediately think of all the lesser-known NPCs that hang out in Orgrimmar, Stormwind, and elsewhere throughout Azeroth. They’ve not fought all the big bads like we have, but they’ve still suffered through all the tragedies that affected the world at large.

With the seemingly endless onslaught of world-ending threats, it’s hard to imagine someone in their shoes managing to keep going. And yet, they still do. Way to go, NPCs, you guys rock!

STYLISTSHUANNA HAS A QUESTION ABOUT STYLE:

Is there a glyph or an NPC that can change the feral artifact look into the “usual”, pre-artifact look? I like my furry little friend without protruding horns, spikes and funky hair. Or should I just visit a barber?

As many commenters pointed out, you can use Glyph of the Chameleon (“chamma-leon,” as Ted Mosby might say) to override the appearance effect of your Artifact weapon. It’s not perfect, but it more or less does what you’re looking for.

SWEBER24 ASKS WHAT MANY OF US WANT TO KNOW:

Class Hall question , I am not a big fan of the class hall, I did like the Garrison but see the issues with that. What I would love to see put in the game is a GUILD hall. Has there been any whispers about anything like that ?

{PB} As far as I know, there hasn’t been any talk of a guild hall — well, at least in terms of adding one. It’s been asked before and, if I remember correctly, given the “not on the table right now” answer.

Personally, I’d love a place to show off guild achievements — hanging bosses’ heads on the walls, placing banners or having unlockables for specific achievements, and so on — but I think they’d end up being a bit of a headache. What happens to a guild with multiple raid teams? Do those teams split off so they can celebrate their achievements without worrying about another team beating them to the punch? What happens if a GM goes mad with power? Or what if a guild decides to rename itself or transfer factions?

I’m not sure there’s a way to make guild halls feel meaningful without also opening the doors to the usual guild drama that can creep its head into the game.

GLOWING METEOR CARROT HAS THE BEST NAME EVER AND ALSO A QUESTION:

Will we still have to do the artifact empowerment quests in 7.3?

Nope! Blizzard mentioned in the Q&A last week that there will be several catch-up systems put in place with 7.3 that remove the gating on a lot of Artifact unlockables. Among those, the quests required to unlock Concordance and the time-gating on the third relic slot (it’s like they read my Queue last week!)

QftQ: I’ve finished Branns last archy quest, it mentions a piece of the titan disk is still missing, any thoughts?

I haven’t completed all of these, so I don’t have all of the context, but I have to imagine it’ll tie into the next expansion in some capacity. Normally I’d be a bit more cynical and say Blizzard has nothing concrete planned, but they’ve been pretty good about setting up the dominoes in Legion, and I expect this is the same. Feel free to speculate among yourselves, though!

In general, I tend to agree with you guys in thinking that garrisons didn’t prove anything about isolation and player housing — they were designed to isolate people, which isn’t what player housing needs to be. Take the armor racks or Artifact displays in the class halls. They’re still in a populated area, but they are visible rewards that celebrate individual accomplishments.

Anecdotally, I was pleasantly surprised to find a literal player house when playing through Breath of the Wild. It’s in one of the main villages, but it’s yours. You can add lighting, weapon and armor racks, a field out back, and a few more things. You don’t go there to do anything special — no NPCs exist for you to buy something from, you can’t craft anything there, it just… exists.

That’s all player housing needs to be: a place to unwind and maybe show off some cool achievements.

So, I finally leveled my Shaman and got his class campaign done. (1 more alt to go :D )

Do you think Blizzard is ever going to address what happened to Neptulon? In Cata he gets kidnapped by Ozumat, but in Legion the Earthen Ring just phones him and he pops up.

Did Blizzard forget that they didn’t actually do the Abyssal Maw raid that they were planning, and that there is a bit of a plot hole that needs filling?

Honestly? I think Blizzard is done with that particular storyline. They might have Neptulon do more in the future, but I doubt they’ll actually go back and explain the events between Cataclysm and now. It’s a shame, too, because it feels like the ‘What happened to Neptulon?’ question is asked more often than anything else, both here and on the podcast.

MISTAH JAY, DO YOUR THING:

2BE: Garrosh vs Grommash (both with Gorehowl, if that helps)

If we’re talking AU Grommash, I think he’d have the upper-hand. Not only does he not (initially) know that Garrosh is his son, but Garrosh also has daddy issues and a soft spot for his AU father.

The MU Grommash might not do so well, though. Without anything holding him back, Garrosh would likely try to prove himself to his father. It might lead to some mistakes, but overall, I think Garrosh would beat MU Grommash.

That’s all for today! Now go turn Kil’jaeden into Killed’jaeden!

(And leave questions for Liz)

Blizzard Watch is made possible by people like you.
Please consider supporting our Patreon!
Filed Under: Splatoon 2, The Queue
Advertisement