The Queue: Squids these days… 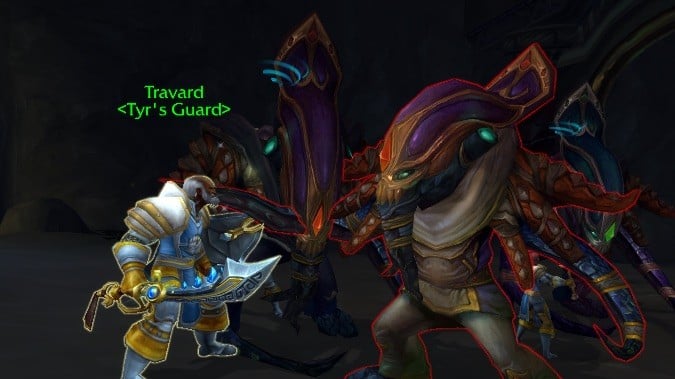 The first problem is that I don’t even speak squid. But the second problem is definitely squids these days.

Come on, you know I’m not a Shadow Priest. I don’t understand these kids and their tentacles and their void magic. I’m just going to be over here playing my Paladin.

Q4TQ (Non Blizzard MMO Edition): What brings you back to an MMO you’ve abandoned? Expac announcement? Friends harassing? Having a dream that was so real you could’ve sworn you were in [insert MMO locale here]?

For me, at least, it’s always the people… and I think that’s why I’ve always come back to WoW. I’ve played plenty of other MMOs, and with a lot of them I would play until I hit the level cap (or just got bored) and then drift away. But all of my friends are always in WoW. So when I drift away, that’s where I drift back to.

I left WoW once, during Cataclysm. The game changed a lot, but more importantly my guild had broken up — and there just didn’t seem to be a good reason to stick around. I missed most of the expansion and came back during Mists when some friends asked me to join them.

It’s always about the people.

{PB}The WoW music is great (and sometimes more importantly, other sound cues), but everything gets old after a while. And sometimes, leveling that dozenth alt you just have to have something else to entertain you. Maybe that’s music,  though I’m more partial to putting Netflix on in the background.

(I do,  however, always have the sound on for dungeons and raids. You just lose too much of the experience otherwise.)

It’s just like Leeroy to charge in without making a solid plan of attack. I’m going to assume he’ll just be there waiting for us when we arrive.

Q4tQ: Why are there food shortages and injured vets and blights on Azeroth?

Priests can heal. Mages can conjure food and water. Shaman can summon the elements in a drought. Paladins can consecrate defiled land. Mages and Shaman can put out fires (which makes them doubly lazy both during the Headless Horseman and that initial Obliterum quest chain).

I know magic can’t heal aging (although some mages and paladins are putting that to the test in Legion) but the rest…why were the refugees hungry outside the Exodar? Why haven’t the Priests and Paladins gone and reclaimed Stratholme by purging it with light? Why doesn’t Dalaran have its own personal magic fire brigade? Why haven’t the shaman helped make Orgrimmar’s fields more fertile?

I know part of it is gameplay but come on. Lets add some practicality to our fantasy game.

This is an interesting conundrum in most sci-fi and fantasy universes. With all of this power — magic, technology, and whatever else — why is anyone still suffering? Even in a simple dungeon run or LFR, people are fed, healed, and resurrected. So what the heck is up with Westfall, where the entire zone’s plot is based around people starving? A Mage could conjure enough food for everyone in the zone, a Priest could heal the ill, and, heck, a Resto Shaman could show up and dump some water on the crops so the zone is less of a wasteland.

You see places like Dalaran where magic does everything for the city… and then there are places like Westfall, where everyone is apparently too busy to bother helping.

There are so many broken parts of Azeroth that I wish we could revisit and fix. (After all, phasing could pretty easily let us do that these days.) But both game  —  and players — are relentlessly set on moving forward.  And in fairness, the Legion is a bigger threat than the problems in Westfall. (A much bigger threat.) But can’t we ever just fix something?  I really wish we could.

That’s all for now, Queue-friends. As always,  please leave your questions in the comments for Anne tomorrow and I’ll see you back here next week!