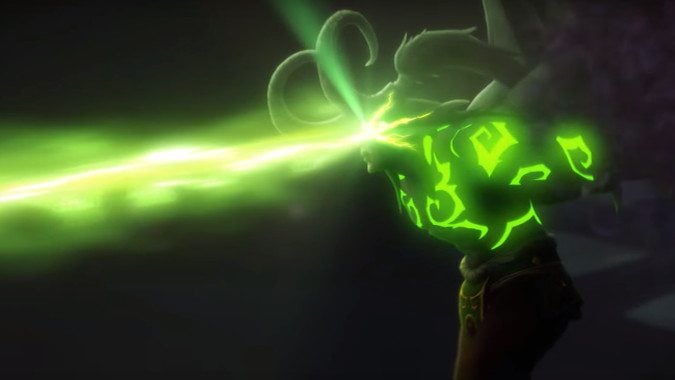 Sadly, instead of the power to shoot lasers out of my eyes, by the time you read this I will have already been sat down in a chair and had lasers shot into my eyes instead. They will be burning holes in my retina in the hopes of preserving what waning vision I have left (I’m going blind, as I’m sure you’re all sick to death of hearing about by now) and so I’m not likely to gain the power to shoot said lasers back out again.

Still, one can dream.

This is the Queue. Anne and I switched days because I’m really not going to be up for doing this tomorrow. Likely I’m just going to be lying in the dark trying not to cry. But hey, right now I’m here, so let’s have some questions.

Did you put Illidan up there because Liz used Malfurion yesterday?

Nope! I was originally going to go with Superman. 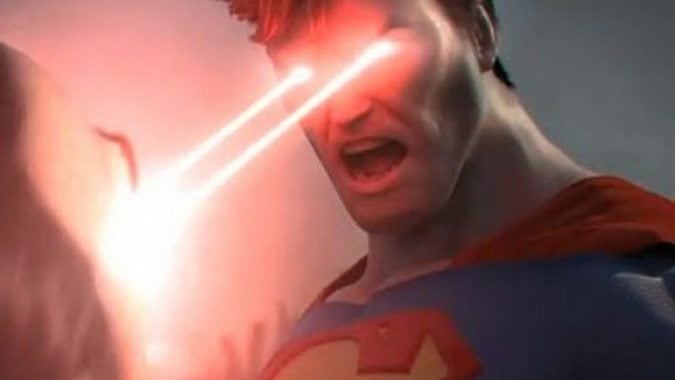 But then I thought heck, Illidan has eye lasers and he’s a big deal right now because of patch 7.3, why not and here we are.

Q4tQ: Related to a discussion from today’s Argus post, do you think Blizzard owes a degree of parity to all specs as it relates to PVE overworld soloability?

Case in point: I main an affliction warlock, especially on Argus because, gearing levels aside, I am equipped with the pet, the damage output and the sustained survivability not only to handle inevitably ridiculous overpulling, but to eventually kill most if not all non-raid world bosses by myself if I must. Were I to try the same situations with, say, my arcane mage or enhancement shaman, the density would eventually kill me, and the world boss would run me over as soon as my cooldowns wore off.

I don’t have an easy solution to mend these chasms of solo accessibility between not just classes but specs (saying “use your other spec” is not acceptable in this context, IMO. You’re soloing, this is your time, you should enjoy playing the spec you want to) frankly the solutions aren’t my job, but I think that job deserves to be done. Blizzard has been absolutely wonderful with their offerings of overworld content, but I have a feeling my enjoyment is heavily amplified by my love of tank and pet classes/specs. Am I asking too much to expect everyone have as accessible a good time as I have had with the “outdoor endgame?”

The problem here is defining ‘degree of parity’ and then balance it against class uniqueness and role diversity. I’m not saying an effort shouldn’t be made so that Holy Priests can solo effectively, but it’s a problem that has existed in World of Warcraft for the entirety of its existence and it’s never been wholly solved to the satisfaction of all players, nor do I expect it ever will. Warlocks are a bit of an outlier in that regard — like Hunters, being a Pet class often ends up making Hunters feel like a DPS class that carries a friendly tank around with them. Is the solution to nerf Warlocks and Hunters? Buff everyone else’s DPS so that Hunters and Warlocks do less damage in return for having that tanking pet?

How close is close enough? If my Arms Warrior is a much better soloing option than her Fury spec (it absolutely is) should Fury get buffs to survivability or DPS to compensate? Will that make it utterly OP for raiding? Again, I’m not arguing this isn’t worth pursuing, but there’s an old saying that the perfect is the enemy of the good — as much as we might want all 36 specs to be equally good at soloing/questing, it might not be feasible. It might not even be feasible to get all the classes up to parity in this regard.

I mean, the easiest way to balance it would be to buff pure DPS damage so that they could burn stuff down faster, but that’s not something you can just turn off in five player and raid content. And it wouldn’t do anything for healer specs — just another variation of ‘just go shadow/elemental/balance/ret/windwalker’ which doesn’t fix the underlying issue. Blizzard does try and balance this all out, and I think they’ll continue to do it, but how good is good enough? You’re never ever going to have perfect equality for all 36 specs and preserve any sort of unique identity for those specs. It’s just not possible.

That being said, Fury needs more self healing. Victory rush, something.

Q4tQ: did Bolvar know Lothar? Is that how we will get Lothar in game? Deathlord Lothar, right hand of the lich king (the secret unlockable 5th horseman)? Which concerning who Anduin was named for, means Anduin would have to face the evil of Anduin.
If that is too much to process; Lothar Vs Garrosh, who wins?

We don’t know if Bolvar knew Lothar or not. He certainly knew of him, because he’s about the same age Varian was and Lothar was famous throughout the kingdoms of Humankind as the last descendant of the Arathor bloodline and a renowned Warrior. Also, Lothar led the evacuation of Stormwind, which means he almost certainly knew Lady Mara Fordragon.

We don’t actually know if Lady Mara was related to Bolvar, but it’s exceedingly likely she’s some relation to him. She could well be his mother — she’d be about the right age. Lady Mara helped with the evacuation and was so respected after the war that she got a statue in the rebuilt Stormwind Keep.

Patron of the Refugees who fled to Lordaeron after the First War.

She was the bright mother of our future. May she rest in the Light.

She also has a statue in the Paladin Class Order hall underneath Light’s Hope Chapel. This could mean she joined the Order after the refugees arrived in Lordaeron — we honestly don’t know enough about Lady Mara and her life and death to say. (The writing on her statue in Stormwind certainly seems to imply she is dead.) But if Lady Mara was Bolvar’s mother or aunt or other relative, he certainly would know about Lothar.

I feel like Lothar would wreck Garrosh, but I’m biased.

All right! Lore Q4tQ, that I only hope I can articulate well enough for my question to make sense.

So Legion does seem to be painting this picture of Light and Shadow balance. We see that most shadow-based powers that we harness come from the old gods, which are (part of) the reason that Sargeras went on his rampage to destroy all life in the universe.

While I’m all for the balance of powers (not the questline, the story element), do you think that by using the powers of the old gods/void lords to fight Sargeras, that we might be creating that future that Sargeras feared so much? I.E. giving the Void a stronger foothold in the universe, especially without any titans to oppose them and the Naaru few and far between.

Ask the Shadow Priests. They’re only carrying around a big ol’ chunk of Old God and infusing it constantly with more power.

More seriously, yes. I suspect the Old Gods are going to make a move as soon as they can and the next expansion is going to deal with just that. We’ve set them back in some ways — banishing the Nightmare from the Emerald Dream, for example — but I definitely expect to hear from N’Zoth and soon. (Check out Friday’s KYL for why I feel that way.) The new scenario definitely seems to be pointing at more Old Gods in our future. With the Legion dealt with, they’d almost have to be up next.

LoreQ4tQ: consider this line from Class Preview for Priests,

The Light in which many priests bathe is brilliant and effervescent, granting them immense divine power. But the brightest light casts the darkest shadow—and from within this blackness, a rival power dwells.

Could we one day see Velen go full Voidform and melt some Demon faces (possibly with Mitch in delight at ShadowPriest representation inLore?

If you want Shadow magic in 7.3, it’s not coming from Velen. He’s still attuned very strongly to the Light. And with certain events I think we’re starting to see that Light can be as destructive as Void.

QFTQ: Since Kel’thuzad is already being hyped and about to be released for Heroes, what new Warcraft heroes might/could they announce at Blizzcon that would also have a lot of hype behind them?

(Two years ago it was Cho’gall, Greymane and Lunara; last year it was Varian and Ragnaros. Damn, time flies by fast).

Blackthorne’s not a Warcraft hero.

Also, I’d rather have another of the Prime Evils (preferably Ba’al), another StarCraft character (maybe Mengsk himself?), and definitely Doomfist before we got another Warcraft hero. But definitely Blackthorne.

Because of unforseen circumstances, I’m currently unsubbed (what a timing, eh?), but I have to say – reading all the Argus comments really gives me a lot of useful info :)

That said, question: The Magni Bronzebeard quest – will I have to do that in order to proceed with the Argus intro quests? I’ve done the Magni one on one character but didn’t bother with the 15+ other characters I currently have at 110.

Nope, you’ll be fine. I haven’t done it yet and I’m doing okay on Argus. I won’t get to play until next Monday (eyes lasered and all that) but I’ve been doing Argus up to now just fine.

Okay, that’s the Queue for today. I’ll chat with y’all next week. Anne’s up tomorrow so be sure to throw her some questions about lore, she likes those.

Blizzard Watch is made possible by people like you.
Please consider supporting our Patreon!
Filed Under: Eyes, Lasers
Advertisement