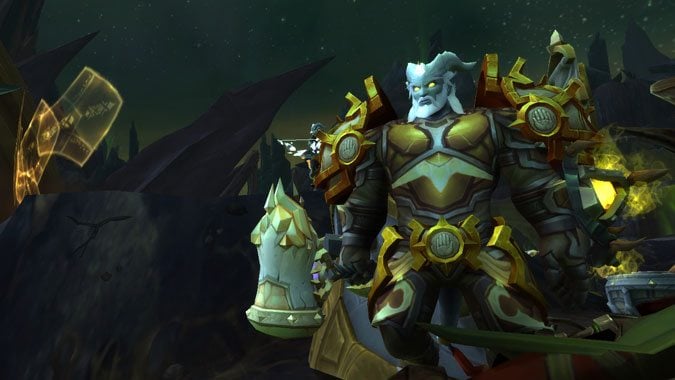 I hope you’re all enjoying your last day of summer by staying inside and helping the Army of the Light.

When does the new follower gear start to appear? I have not gotten any from missions or from the cache.

New follower gear is obtainable via quest lines on Argus and purchaseable thereafter. You’re not going to get to 950 immediately though, you’ll need to get all your followers up to 925 first. The 925 part should be doable starting next week, if I’m understandings correctly.

The 950 gear will unlock the following week, but from what I understand (correct me if I’m wrong), it’s going to be a bit of work to get six followers to 925.

When a character gets enough Artifact Power to “level,” he/she still needs to go back to the Class Hall to “unlock” it, am i right? Is this dumb? Shouldn’t AP just auto-apply, at LEAST once a character hits Concordance?

At this point with three alts at 110, several artifact weapons at max power, and more on their way, it’s pretty damn tiring to keep going back to the class hall to unlock a trait, yes.

I would think an acceptable compromise is a rest area, or if Blizzard were to put a place on the Vindcar or somewhere that allowed you to add things. Overall it’s just a chore now and one that I think can be done away with. Maybe in 7.3.5?

While we’re on the subject, I’m having a hard time understanding why it’s at points easier for me to log out, use my WoW companion app to manage missions, and then log back in to continue whatever I’m doing. This is kind of nuts — perhaps in 7.3.5 they can allow for dual logins between the main game and the app, too.

Hop on a bat to fly from Tirisfal to Silvermoon. Go outside, go to the kitchen mop the floor and come back just as the bat lands. That takes way too long. Should they up the speed of flying from flight points.

Absolutely they should. I think Blizzard is also setting themselves up for misplaced expectations with the instant hub transport available in Argus vs what’s going to happen next expansion most likely (flight/boat paths). Consider how easy it is to zip around the planet right now with those semi-Protoss looking devices. Click, loading screen, done. No more get up and get some coffee while the flight path zips you around.

I actually do think flight time is good; a good game paces itself, and flying over long distances, while annoying at times, gives you a natural pause and shows you what’s happening elsewhere — a very good way to tease what you want to be doing in the future (or at least go and check out). This was especially prevalent in the early days of WoW when you’d be taken over enemy territory and see some pretty massive outdoor bosses roaming around. Sure, the same thing still happens now, but it’s not the same.

The one part, as you correctly mention, that isn’t worthwhile is the long flight paths. There needs to be a “skip” of some sort so that a flight doesn’t take longer than a couple minutes at most. If I remember right the flight paths are all based on a graphs with pre-defined flight paths, so implementing this skip would be a pretty simple tree traversal dependent on the time between nodes. Someone once explained to me how it all worked many years ago; so it could have changed sine then.

I really wish WQs would only reward relics for your loot spec.

Check out the currency rewards on Argus, you can pick out the exact relic you want for 650 shards. It’s a really nice way to upgrade your weapon exactly as you’d like.

Just have fun farming the shards… Seems like around 650 a week is what you’ll get with a regular play.