The Queue: I am not Mitch 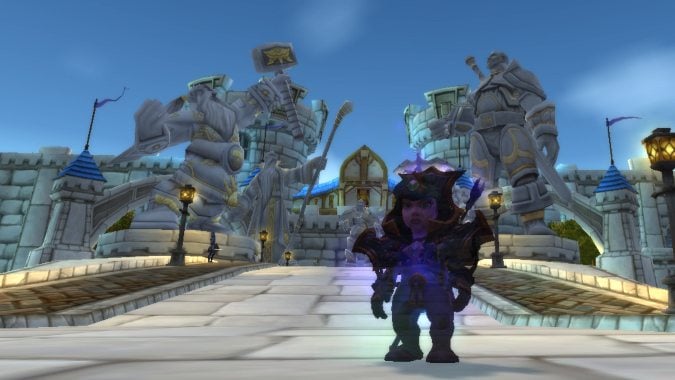 I mean, I don’t think I am, but reality is all about perspective, and with enough smoke and enough mirrors between writer and Queue, who knows who I am. I guess you’ll just have to live with the mystery.

What ever happened to Mitch’s Valor Points?

Oh, Valor Points, how you haunt my dreams. Just when I think this grind factory is gone for good, it comes boomeranging back into my life. Like it is with this question. Mitch, Scott, you are both on my list now.

Q4TQ: Going off of Matt’s breakfast topic this morning and my own experiences in GW2 last night, do you think Blizzard would ever build a “treetop” zone that has multiple layers – and plenty of places to fall down from – to create a quasi-3d environment?

On one hand, I often find 3D puzzles annoying. WoW’s UI isn’t great at showing when something is up and when something is down, which has led me to spend countless hours wandering circles around mountains looking for a path up only to realize that the quest marker is actually a cave with an entrance on the other side of the zone. Legion has improved this, but it’s still imperfect, which can lead to some frustrating moments.

But I’ve gotta say, a treetop zone sounds pretty cool. It could add some crazy platformer elements, where you can swing from vines and jump from ladder to ladder.  (And just imagine the uses of Goblin Gliders!)

But that probably also means a lot — a lot — of fall deaths, which leads back to the original problem: spending a ton of time figuring out how to get from place to place just isn’t that much fun. And dying and running back isn’t that much fun (especially when it happens over and over again). So the trick to something like this is how to take the pieces of this concept that are fun and strip them of the pieces that are very much not fun at all. Maybe, like with Vashj’ir, that means something that keeps you safe in an inherently unsafe environment — after all, you didn’t spend all of your time in Vashj’ir drowning, so why would you spend all of your time in an aerial zone falling to your death? Parachutes, flying machines, or just magic could all keep you safe enough to dance around the treetops without being completely miserable.

But after the negative reception Vashj’ir got, I wonder if Blizzard will try something quite like that again. I suppose it depends on whether future expansions call for areas like that. (But if they do, let’s see some mounted aerial combat, okay?)

To piggy back off of my previous comment about player choice, I could see Blizzard doing something akin to the Scryers/Aldor thing in a future x-pack where we choose to either use the powers of the light or the void to aid us in our battles against evil. Although this might be especially hard for some classes (Priests, Locks, DK’s, etc.)

{PB}I really liked the Scryer/Aldor thing in Burning Crusade. It offered this interesting little bit of customization and story, but we’ve never seen anything quite like it since. The game seems more interesting when there are more options for diverging narratives and player choice — something a shared world MMO has little opportunity for.

I suppose something about the system must have not worked well for Blizzard or for players to prevent them from revisiting it, but I’m not sure what. But it has been a while since TBC and perhaps I’m looking at it with rose colored glasses: remembering the things I enjoyed and forgetting the things I hated.

QftQ: If Blizzard gave us a choice between a new playable race (pick your favorite) or more customization for current characters (hair styles, tattoos, etc) what would you choose?

Customization all the way. I want more hairstyles, eye colors, makeup options, facial expressions, and more. Sure, there are different faces and skin tones and hair styles and hair colors and jewelry options, but even so there are only so many looks for each character — especially in a game world with so many people. Transmog, of course, helps to differentiate one player to the next (and keeps us all from looking exactly the same when we hit max levels), but there’s just not much to our characters that’s us. Take me for example. How many pink-haired, green-eyed Gnomes are there out there? Come on, raise your hands. A lot of you, right? Right? 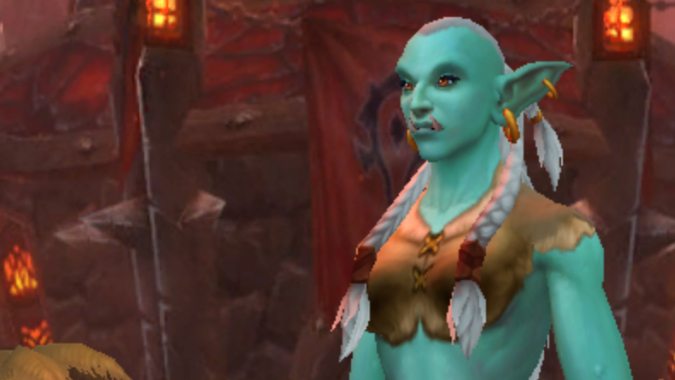 But the worst example of customization, I suspect, is with female Trolls. Female Trolls have one “pretty” face option (that has an entirely different bone structure) and a bunch that are varying levels of I will as soon murder you as look at you. The “pretty” face is the one you see on almost every female Troll. Even though there are options, this is the only Troll face you’re likely to see.

So,  yeah, my vote’s for customization. Let me give my pretty Troll face angry Troll eyes or my green-eyed Gnome a snarling expression. Anything that makes our characters more ours is good in my book.

Q4Q: Do you think the Blizzcon Goodie Bag preview was holding back surprises, or is it being Overwatch-heavy a natural progression?

I really hope Blizzard is holding back some surprises, because I found the goody bag rather disappointing. Maybe it’s just me, but I don’t find the bags themselves that interesting, and over the last few years the goody bags have been more about the bags and less about the cool stuff inside them. This year we have a generic black backpack (boring, at least to me), stuff to stick on it (do I need velcro patches for a bag I’m not going to use?), and three blind-boxed goodies (two for Overwatch). In part because of the emphasis on the uninteresting-to-me backpack and in part because everything else is a blind-boxed mystery item, it’s hard to get excited about the goody bag as is.

I still have my BlizzCon 2008 bubble-hearth beach ball sitting on a bookshelf and it’s still hilarious nine years later. And actually, 2008 was a great goody bag year, with an inflatable Frostmourne, goopy zerg creep, some Diablo 3 “sinamints,” and a pack of “QQ noob” tissues. By comparison, this year’s goody bag seems awfully light on fun stuff and makes me miss the goody bags of old, which were a heck of a lot sillier… and didn’t include any backpacks.