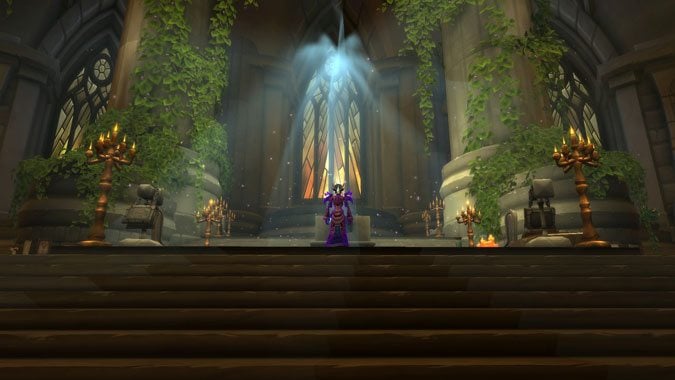 You know, I was all good with each Class Hall I’d been in so far in Legion. They were unique in their own ways, some larger than others, but they had a cool vibe. Then I visited the Paladin Class Hall while doing a quest on my Priest. …holy heck that place is beautiful. It’s amazing! I don’t feel…robbed, per se, but I am envious. Envious to the point where I’m actually considering leveling my Paladin just so I can go hang out in there. I mean…come on.

Oh that’s right we have questions to answer, don’t we. Let’s get to those.

Q4TQ: Besides water zones like Vash’jir and 2-2, what is the worst zone you’ve ever played in a video game? Tangled Depths in GW2 is a contender for me after last night.

Non Blizzard titles? I loathed the Blitzball segment in Final Fantasy X. Sports games are not my thing, so having a sports-themed minigame shoved in the middle of my gorgeous story-laden RPG was…annoying, to say the least. I don’t mind minigames as long as they’re either thematically appropriate, or avoidable. I mean, WoW’s got its own version of Bejeweled with the Jewelcraft toy. It’s not especially relevant, but I also don’t have to play it if I want to continue on with a storyline, either.

And flashback to when I was really young, the Stampede level in The Lion King for SNES. Those wildebeests were the worst, man.

Is the Argus story progression really over until Antorus comes out? The dungeon kinda ends in a way that makes me want to know what happens next with [redacted].

Yep, the story is over until Antorus comes out. However, if you’re wondering about stuff that happened in the latest update, you can have a chat with Alleria and ask her directly — she has a conversation option where she’ll explain the current situation a little more clearly once you’re done with all story quests and the new dungeon. Not too clearly, though.

Lore q4tq: Why did completing the Crown of the Triumvirate infuse the Vindicaar with the Light? Wasn’t the crown an object of arcane power? From what I can tell neither Archimond nor Kil’jaden never had anything much to do with the Light. and at the time, neither did Velen. They were all about the Arcane back then.

We don’t actually know if the Crown was an Arcane relic or not. We do know it was crafted by Archimonde, Kil’jaeden, and Velen. It was designed “to bring prosperity to all,” which is a pretty vague purpose. If the pieces used to craft it were crystals similar to the Ata’mal crystal — or if the Ata’mal crystal was used as part of the crafting process — that could explain things.{PB}

The Ata’mal crystal was gifted to the Eredar long, long ago by the Naaru. According to history, the Eredar used that crystal to aid them in developing their society to the wonderland of advancement it was when Sargeras arrived. So in a way, the Naaru have permeated Eredar society for a very, very long time — the Eredar just didn’t know it.

The other thing you have to look at is the ship itself — that’s a Naaru vessel. All of those crazy inter-dimensional Draenei ships are Naaru vessels. The Draenei may have constructed it, but the pieces they used were undoubtedly salvaged from the Exodar. So the thing was probably infused with a low-level dose of the Light all along. Supercharging it with something as powerful as the Crown of the Triumvirate just flipped the proverbial Light-switch on.

Do Greater Rifts not have a quest associated with them? I thought they did last week.

They did last week because you needed to turn in Argus Waystones to Illidan in order to unlock them. Argus Waystones have since been removed, so the quest associated with turning in the Waystones has also been removed. There’s still a quest to complete three of the smaller Invasion rifts, but it just rewards Veiled Argunite now.

Odd. Bought my ticket but I don’t seem to have the mounts yet. Are they mailed to you or instantly put in your collections?

You should see them immediately in your Collections tab — the mount will appear at the top of the collection list in a box you have to unwrap. If you’re logged into the game at the time, you may need to relog for it to pop up correctly.

Anyone else digging the new ethereal models?

The Ethereals were one of my favorite parts of Burning Crusade. They were just downright weird with their origins, the lack of corporeal bodies, the bandages, and those amazing light flares that blossomed every time you killed one of the guys. I always wanted to know more about them — they just seemed like they had a larger story waiting to be told. So I’m really excited they’re making another appearance here, and I love the new models. I hope we see more of them beyond Argus, because we know so little about their society, and they’re fascinating.