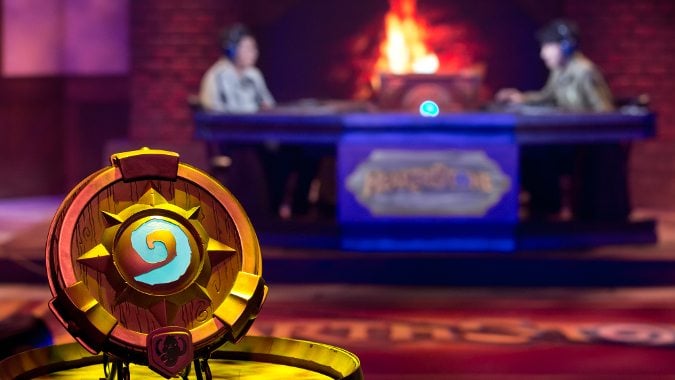 A lot of Hearthstone esports went down in Blizzard’s new Arena in Burbank over the weekend. Not only was there a well-attended Fireside event where players got the new alternate Warlock hero, there was also the matter of the summer global championship to settle.

Only one relatively big story came out of the lower bracket, and as the story developed it seems as though much of it came about due to regional memes. Korean player cocosasa says he made a calculated effort to be animated in his time on stage, potentially to throw his opponent BaiZe off her game. That seems to have soured the crowd on him when he replicated a common Korean meme, saying ‘Vel-ha’ and waving when BaiZe played her Prophet Velen. This was interpreted at the time to be very rude, seeming to wave off BaiZe mid-match. Apparently this is how they greet specific common cards in Twitch chat in Korea — the other example he gave was Pat-Ha for when Patches is played — and he didn’t mean to come off as a big jerk. He apologized to her on inven. {PB}

The top eight matches ended with favored Russian player Pavel going up against Canadian Purple to try to secure the last spot for the year-end championship. Purple was incredibly relieved and happy to win, and he’s going to Amsterdam along with Surrender, JasonZhou, and his training partner Orange, who also rhymes with nothing. Purple then had to go up against Korean player Surrender in the semifinals. Surrender took him out in a head to head which almost looked a bit lopsided in his favor, a dominant performance. Orange went up against JasonZhou on the other side of the bracket. Orange took the first two games, and then JasonZhou tried the reverse sweep. Game five was a Shaman mirror match, which Orange closed out with a board full of minions and a Bloodlust.

In the grand final versus Surrender, Orange came out of the gate with a big win. Surrender fought back with his Rogue to take game two, then his Paladin deck took game three. The great board clear and the extra mana given by Orange’s Druid deck let him tie it up. Game five, a Priest mirror, was fantastic. Orange used his Circle of Healing to try to burn some of Surrender’s cards with his Northshire Cleric. Surrender didn’t burn many useful cards, but it was down to his last card before he drew Raza the Chained to clinch the final win.

Congratulations to the HCT summer champion, Surrender! We’ll be seeing him again in January in Amsterdam for the World Finals, where over a million dollars are up for grabs.