Intrepid dataminers have discovered a potential new World of Warcraft feature: numerous new playable races, or possible variations on existing playable races.  As of patch 7.3, the community has uncovered four additions in the “chrraces” file which includes all of the game’s races that can equip armor, playable or otherwise. However, races that are not playable typically do not have values for display backgrounds on the character creation screen. The entry for Humans will include a value telling the game to display the Human background at character creation, but Vrykul have no associated background.

The four most recent entries to the “chrraces” file do have background values, which they share with existing races:

{PB}Given only playable races have background data, this discovery suggests these new entries could be playable in the next expansion. The Nightborne entry strengthens that suspicion: the “chrraces” file has historically been used specifically and exclusively for races who can equip armor. The Nightborne models in the live game have preset appearances. The armor they wear cannot be customized in the same way the developers can, for example, put any piece of armor on a Vrykul. If the Nightborne have been added to this list, it suggests the developers have created new, more customizable Nightborne models. There would be no need to do that unless the Nightborne continued into a future expansion in an even more meaningful role than they held in Legion.

BlizzPlanet documents additional evidence toward these racial variations being playable in the future, but we should temper our expectations. While these new additions seem likely to be a feature in the next expansion, they could also be explained by an internal change in workflow. It’s possible they’re simply decided to give all races, playable or otherwise, a placeholder background for their own purposes. It doesn’t necessarily indicate these races will become playable, even if Art Director Chris Robinson has previously stated it’s something they want to do.

But with that said, it doesn’t hurt to speculate. The Highmountain Tauren and Lightforged Draenei are straightforward enough; they’re existing variations of current playable races. Highmountain Tauren are still, at their core, Tauren. The Nightborne and Void Elves are a little more nebulous, especially if their placeholder backgrounds are indicative of their faction alignment. Alliance players (like myself) might be disappointed to see Nightborne going to the Horde — but it isn’t without justification. In patch 7.3, Silgryn and Lady Liadrin have dialogue pointing toward a partnership, and the Nightborne would fit well with the Blood Elf metropolitan aesthetic. 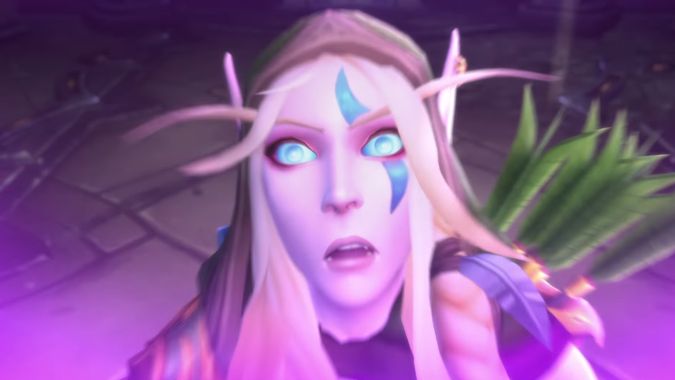 We haven’t seen anything specifically called a Void Elf in-game yet, but given Alleria Windrunner’s story arc in Legion, we can make safe assumptions as to what they are. Much like the Illidari followed in the footsteps of Illidan Stormrage, it’s possible we’ll see Night Elves (or High Elves) following Alleria’s example in taming the Void. While Alleria appears as a neutral character in Legion, she has historically been a member of the Alliance. Elves who follow her examples being members of the Alliance makes sense — although it should make for some fun, ongoing interactions with the Lightforged.

If the guesswork around this datamining proves accurate, it’s an exciting glimpse of what might be possible in the future. Maybe we’ll finally see Wildhammer Dwarves with their iconic tattoos, Vrykul stomping through Stormwind, or Orcs available in more colors than shades of green. Whatever the case, we’re sure to find out for certain at BlizzCon.