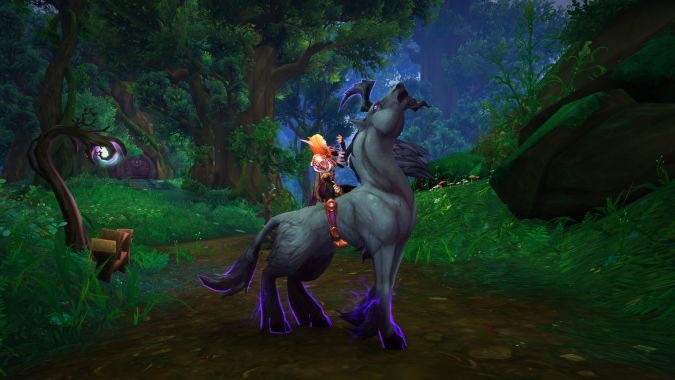 It’s pretty likely that you’ve heard of the Lucid Nightmare mount. It was the most recent of Blizzard’s complicated puzzles, and it had the secret-finding community working round the clock back in September. If you need a refresher, however, recall the insanely complicated riddles that needed to be solved to acquire the mount.

Now that a significant amount of time has passed, Blizzard decided to release a blog post that discusses the entirety of the process, riddle by riddle. They’ve also provided some developer insight alongside each of the steps as a way of revealing what went into each step and, in some cases, what they’ve learned from the responses to the overall experience.

RACKSUM GREEP IS THE KEY

I especially like the insights given into the more challenging steps, the ones that took players the longest to solve or complete. For example, the third note leads to a clue that was intentionally a red herring — the letters were the important part, not the words. And this is something that couldn’t really be discovered without the collaboration of players across multiple regions, since the key was realizing the letters were the same across multiple languages.

There’s more in the full post, but here’s an excerpt to give you a good idea of what went into solving this one:

{PB}The Secret-Finding community, while nimble with previous riddles, was unable to crack this one for over 48 hours, and with good reason. Not only was the text misleading, but it was also localized completely different in various languages. For example, when English talked of Supremacy, German mentioned of Blackmail, and Traditional Chinese referenced Forests. This made many potential solutions invalid or nonsensical.

In fact, the translation was different because the meaning of the words didn’t matter. The meaning of the word, line breaks and punctuation, and the idea that it was a partial text and that there were blanks to be filled in, were all red herrings. Only the letters mattered, which then formed an anagram.

Developer Note: It was amazing to see the international community come together to break the first part of the riddle.  Players in various languages realized that they could extract “is the key” from their text and they would be left over with a set of nonsense letters that was the same in multiple languages.  They knew they were on to something!

Yes, it’s absolutely insane that people solved this — but’s more insane that that wasn’t even the final portion of the step. It all came down to an NPC hanging out in Ratchet and the outfit he was wearing.

Nothing but zeroes and ones

The step immediately after is another one that took over 48 hours to solve — “…though it didn’t quite hit the insanity level of The Chair” — and, once again, took the corroboration of multiple regions to solve. I’m curious how this one would have gone over if the words translated perfectly across all languages. Would it have been harder? Who knows!

I mean, it may have resulted in being solved earlier for all I know. But it’s pretty interesting to see that it was solved by working backward from one of the outlier languages.

Originally Posted by Blizzard Entertainment (Official Post)
The localization team was put to the test with this puzzle, as the solution doesn’t work in Traditional and Simplified Chinese. Both localization teams did a great job of coming up with their own puzzle, and the puzzle was first solved in Traditional Chinese! Enterprising players eventually worked the puzzle solution out in non-Chinese languages by working backward from the known solution!

In the original guide posted here, I mentioned that this step went way above my understanding, and that hasn’t changed. But I highly recommend checking the full notes from Blizzard’s blog post because, seriously… holy crap, guys. 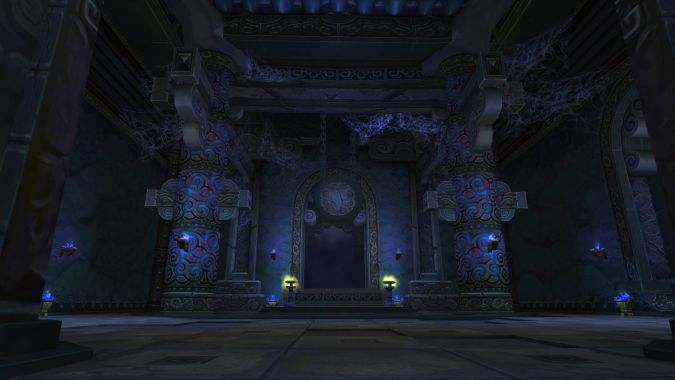 And most notorious of all, the Endless Halls

To players who jumped on the mount bandwagon after each step had long been solved, most of the riddles were likely “solved” by simply looking at a guide and following its instructions. I mean, you’d have to be a bit crazy to not look at least some of this up. But no matter how you went about solving each step, nothing could have prepared you for the Endless Halls.

The Endless Halls took some people four hours (or more!) and were completely randomized “based on your player ID, as well as the day of the week.” Players drew maps, made addons, and cursed more times than they could count. How did Blizzard put this together? I’m partially convinced it was the result of some evil pact, but you decide for yourself:

The maze is arranged on an 8×8 grid of rooms. Each cell has between one and four exits. However, if it would have 4 exits, it’s actually not a single room, but two two-way rooms that occupy the same space, but don’t intersect. These Non-Intersecting Cross rooms are the first major source of confusing discontinuity, and also cannot contain any Orbs or Runes.

The second main source of disorientation is the edges. They loop around, but not directly. Instead, exiting one end of the maze will send you to the other side of the maze, with an additional offset. This makes it very difficult to tell what room you will end up in if you cross the edge of the map.  You can, however, reliably backtrack from your new position to your previous position. Many players made frequent use of this backtracking to reliably navigate the maze without getting lost.

Of course, the Endless Halls weren’t without their learning opportunities. Namely, the randomness might have been a bit too high — some players were in there less than half as long as others. Plus, the nature of the puzzle meant a large community effort couldn’t be celebrated together, like it could back with the Riddler’s Mind Worm.

We learned a ton from how the Endless Halls were experienced by players. Overall, it was an exciting and unexpected part of the series, but a few things could have gone better. By putting the hardest and most involved puzzle at the very end made players trickle through the finish line, depriving the community of the mass celebration moment as everyone who had been working hard on it together completed it at the same time.

Most importantly, the variance in difficulty of different mazes led to some being easily solved by wandering randomly, and some requiring careful mapping to finally solve, leading to frustration for the few with especially challenging mazes. While having individual mazes turned out great, the difficulty variance was just too high. We’ll keep all of this in mind for next round, and thanks for the community suggestions that we add jump scares. Good call!

Pretty crazy stuff, huh? I’m not sure how they could make these riddles any harder without making them outright unfair, but even this level of difficulty is something impressive. Also, I would totally love jump scares in a randomized dungeon. Just sayin’.