Hey, Blizzard Watch, it’s hammer time! The forces of Azeroth have set their sights on Antorus, the Burning Throne itself. Paladins, both Protection and Retribution, will once again be the vanguard. We’ll take a look at recent changes to both specs as well as preview what awaits us in the new raid.

Let’s take a quick look at the changes brought about to Paladins recently:

The status quo remains unchanged. Seraphim is still the DPS talent and Righteous Protector remains the go to survival talent. We want to push as much DPS as we can, but our main job is staying alive, staying alive — somebody cue the Karazhan disco ball. For Retribution, all the changes aimed at increasing the damage of the spec. 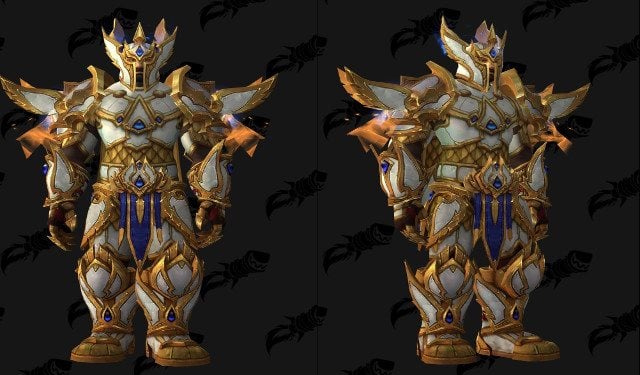 Inside Antorus, Paladins acquire the Light’s Vanguard Battleplate. I had hoped Paladins would receive armor like what you see High Exarch Turalyon wearing, but, alas, it was not to be. For an evaluation of the aesthetics, I turned to an expert, the noted Gnomish armor designer, Modedna.

DARLING! How are you, it’s been such a long time. Tier 21, yes, yes, marvelous suit, darling. I didn’t fall in love with like Tier 6, but it’s pleasing, though the helmet is a bit too much Dragon Soul for my taste, but it’s much better than those horrible banana shoulder you used to wear, am I right? The light waves coming out of the shoulders and helmet are nice touch. For colors, grey (Normal) or white (Mythic) are my favorite, but give an honorable mention to the blue (PvP Alliance).

Thank you, Modedna. While it’s nice if we like the looks of our gear, there’s always transmog to change it. What we can’t change are the set bonuses.

The Tier 21 set bonuses for Protection should help address some issues I’ve been seeing in the higher Mythic Plus key runs, especially on Tyrannical, and on some raid bosses like Kil’Jaden and his Fel Claws ability.

Tier-21 4-piece bonus: While not affected by Shield of the Righteous, the effect of Vindicator’s Shield is increased by 100%. This can only happen once every 1 sec.

Protection paladins have excellent self-healing and some of the strongest active mitigation of any tank, but this is offset by having the lowest hit point total. This had led to certain mechanics that can one shot us outside of our Shield of the Righteous active mitigation coverage. There needs to be some skill component to using ShotR so it isn’t spammed like the old Shield Block, which means by design we can’t have constant ShotR coverage. Also, our active mitigation does require us to stay in melee ranged, but that usually isn’t a problem except for specific bosses like Dargul in Neltharion’s Lair.

The set bonus appears to be an attempt to address this problem of being one shot while not making wholesale changes to the spec. I do have a couple of concerns, however.

First, it would be nice to be functional without needing a four-piece bonus. Second, I’m anticipating there might be some mechanics like Kil’Jadens’s Felclaws where we’ll still be in danger of being one shot even with the set bonus. 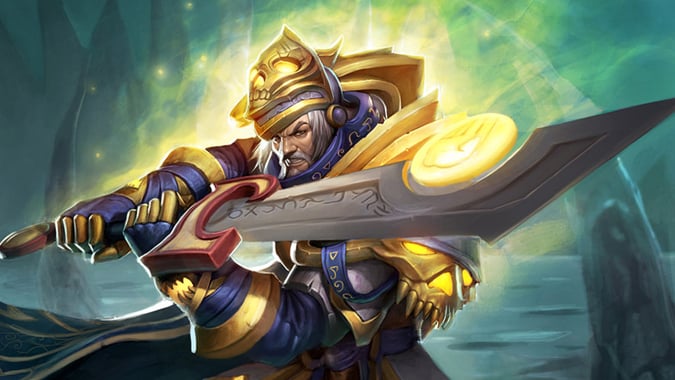 In Mythic+, Retribution Paladins run Divine Hammer. Where the current Tier-20 2-piece gives a damage boost to either Divine Hammer or Blade of Justice, the Tier-21 2-piece only affects Judgment. In Mythic+, groups AoE many pulls depending on the affixes and key level. There’s a limit to how many targets we can get Judgement on.

Tier-21 Retribution 4-piece bonus: When you use Judgment, the cost of your next Holy Power spending ability is reduced by 1.

The 4-piece turns Judgement into a souped up Holy Power generator. A cost reduction is better in most cases than gaining Holy Power because there is no risk of capping. I am concerned Divine Purpose could overwrite the Holy Power reduction from the set bonus.

Antorus will bring a set of six role specific trinkets. For Ret, its Khaz’goroth’s Courage. For Prot, it’s Aggramar’s Conviction. Some players in your raid will also need to wear the universal trinket Aman’Thul’s Vision. This is a new version of Protection’s beloved Unstable Arcanocrystal. When all six trinkets procs overlap, a secondary bonus activates. You are going to want a good representation of all six trinkets in your raid to get as much uptime on the secondary bonus as possible. Protection’s love of the Arcanocrystal might mean there won’t be a huge performance difference between Aman’Thul’s and Aggramar’s.

{PB}Protection has a set of interacting trinkets called Eye of F’harg and Eye of Shatug. Eye of F’harg is a physical mitigation trinket with Bonus Armor, while Eye of Shatug is a magical mitigation trinket with stamina and Versatility. You can transform the trinket from one version to the other on a 30-second cooldown. This won’t be used often as each fight will have a damage profile which favors one version over the other. In an echo of the Pantheon trinkets, if you and your co-tank are wearing alternating trinkets (one using F’harg, one using Shatug) they will activate a secondary bonus. 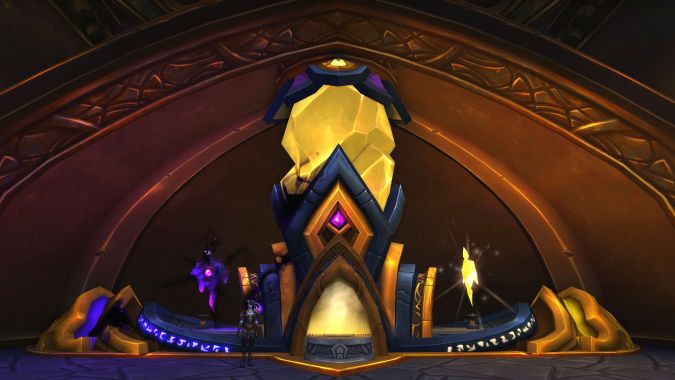 Tanks don’t have an objective metric like DPS classes. Sure, we can optimize to do as much DPS as we can, and we should, but it’s not our primary job. If you’re hitting enrage timers, tank DPS isn’t the issue. This makes something like the Nethrlight Crucible interesting to evaluate. I look at the bonuses from the Crucible from a defense first mind set.

Light Speed, which have been named Ludicrous Speed, is the best Tier 2 Light Trait, and Master of Shadows is the best Tier 2 Shadow Trait. Refractive Shell and Light’s Embrace are also good choices. Murderous Intent can work for Shadow. If you get Torment of the Weak or Dark Sorrows, you may want to try another Relic.

For Tier 3 traits, I love having Consecration in Flame when combined with Consecrated Ground and a Shivermaw’s Jawbone. This is for all the kiting I do on Sanguine and Necrotic. Outside of those, I look for Resolve of Truth, Unflinching Defense, Righteous Crusader, or Scatter the Shadows. If you’re a fan of the Theck Meloree Index, it ranks the traits this way:

The decisions are more straightforward if you are looking for a boost to your offense from the Netherlight Crucible. You can treat it as a DPS class would. The sims have shown Secure in the Light, Infusion of Light, Torment the Weak, and Shadowbind are the Tier-2 traits to pursue. Then for Tier 3 you are looking at Consecration in Flame, Hammer Time (still the best named trait in the game), Stern Judgment, and Righteous Crusader. 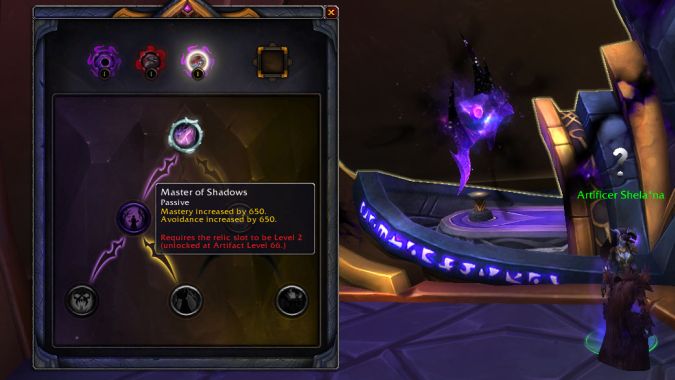 With Retribution, you’re going to be opposite of Nascar driver. Instead of all lefts, it’s all rights. As befitting a weapon of Light like Ashbringer, your Tier-2 choices should be Light unless the Tier-3 trait you want is far left. Again, you have to look at Tier 2 and Tier 3 together. The top two choices on Tier 2 are Secure in the Light and Infusion of Light. If I didn’t see one of those, my next two would be Shocklight or Light Speed. On Tier 3, I want Righteous Blade or Deliver the Justice, again influenced by my major content being double digit Mythic+ keys. Those are the only two I’d consider sacrificing a Light Tier 2 to get. For raiding, look for Wrath of the Ashbringer, Deliver the Justice, and Righteous Verdict. If those aren’t available a throughput trait like Might of the Templar or Sharpened Edge would be a good choice.

Antorus should release soon after Blizzcon and I’m excited to get in there. I’m curious how Paladins will perform. Tomb of Sargeras didn’t have the imbalance we saw in Nighthold with Druids and magic damage. As long as I can show up on raid night, or to my Mythic+ run and know someone else won’t be a better tank or DPS because their raid bar is a different color, I’m fine. Everything else I can handle.