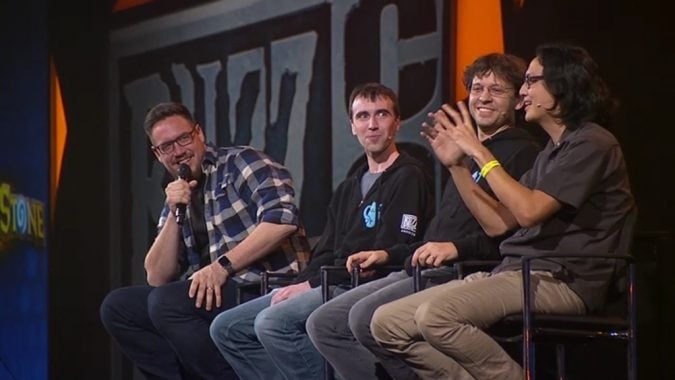 BlizzCon audiences had the unique pleasure of being in the enviable situation where they could pick what cards would be added to the Hearthstone Arena in a future update. During the Hearthstone Q&A panel, Game Director Ben Brode introduced three cards per class, and the audience would be able to vote on the card or concept they liked best. The Hearthstone team would then tweak and balance it for inclusion in the arena.

It’s important to note that these cards may not be the final iteration that makes it into the game. They’re exclusive only to the arena, and have to be balanced accordingly. 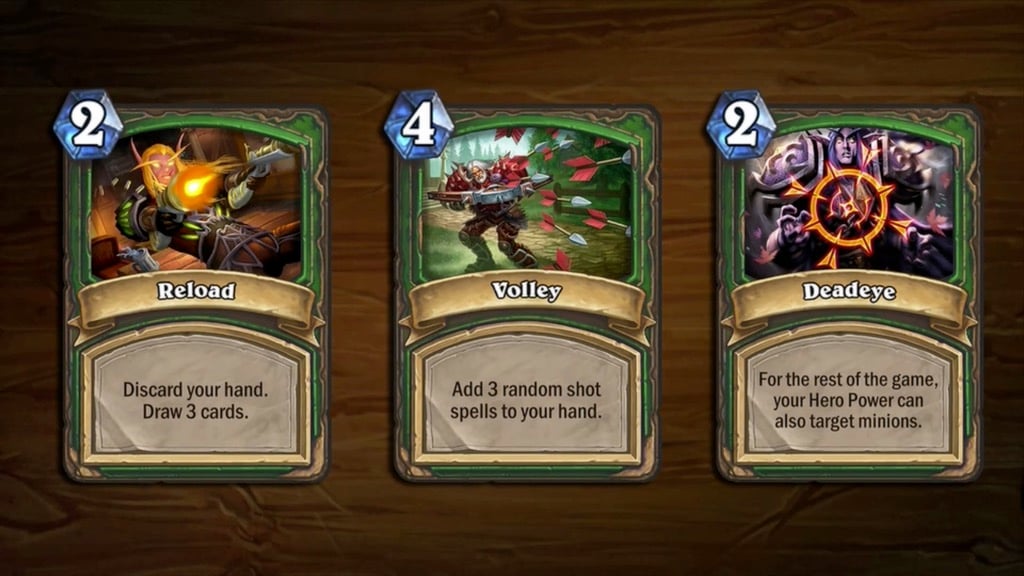 To start off, three Hunter cards were offered, and all of them were interesting. Reload solves a problem that Hunter decks traditionally have: Running out of gas (and cards). If you don’t like your hand options, you can Reload and get some new cards to help your situation. Not only that, if it’s late game and you have no cards in hand, Reload addresses that too.

How about Volley? This is like the Hunter equivalent of Cabalist’s Tome except you get different shots out of it. You might get Multishot, Deadly Shot, Arcane Shot, or other kinds of shots. Like Reload, it’s one way to help refill your hand with options. Lastly, there’s Deadeye, the spell version of Steamwheedle Sniper which grants Hunter’s a souped up version of the Mage hero power, Fireblast. It gives you a great tool to pepper anything on the board that’s small enough — but it won’t do much good for any bigger minions.

This seems more like a style difference than anything else. BlizzCon attendees seemed to prefer the tactical presence that Deadeye provides in arena. Two mana just seems to be too slow. I’m in favor of potentially drawing into options. I just prefer having extra cards in hand, because of the added resources that can help swing the game into your favor. 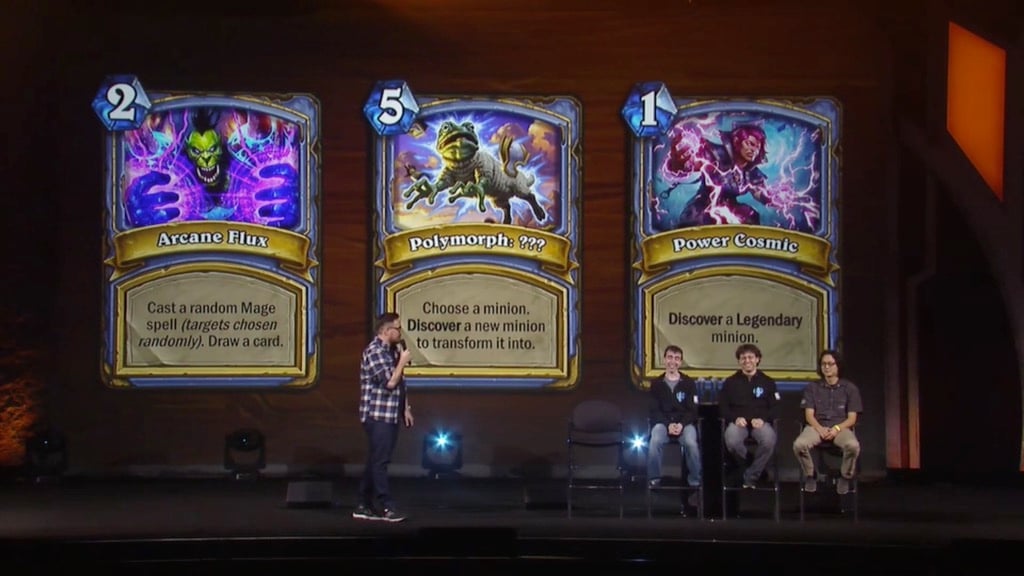 Moving on to Mage, we start off with Arcane Flux. At two mana, you can cycle and draw a card. But there’s a risk — you could potentially send a Pyroblast to your own face. Polymorph: ??? can be used both offensively or defensively. If your opponent has a Tirion Fordring on the board, you could Polymorph it into something less threatening like a Snowflipper Penguin. If you have a damaged Water Elemental that’s about to get eliminated, you can breathe new life into it, and turn it into a potential Flamewaker. Lastly, Power Cosmic provides you with a Legendary minion that can potentially swing the tide of a game. You don’t know what it’ll be, and I tend to shy away from the more random elements of the game.

As you can tell, I have an affinity for cards that can cycle and grant you more cards. All three of the Mage cards have some random elements to them. Some of them will go your way, and others won’t. The extra card lets you dig into your deck deeper. 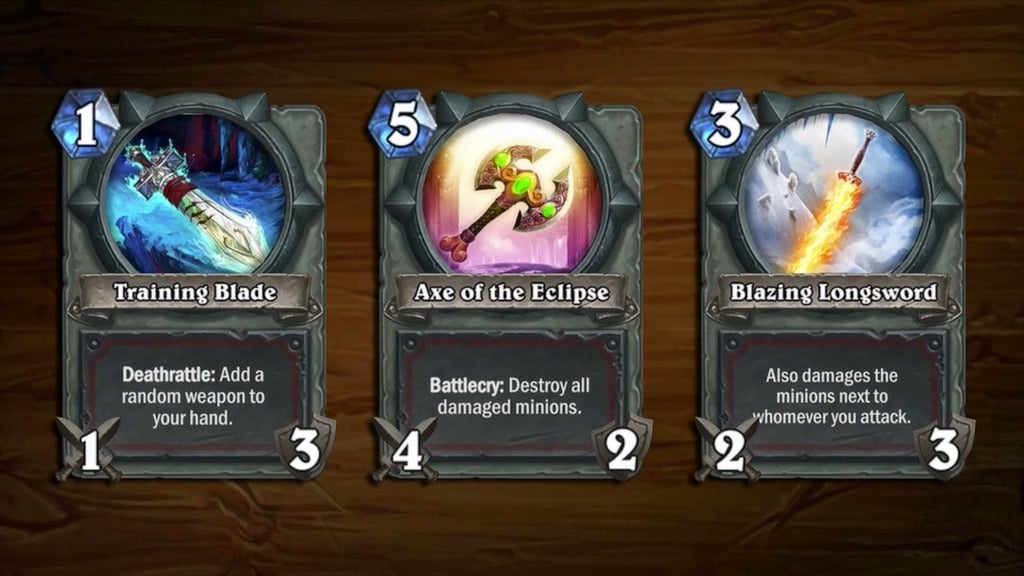 Arena Warriors are getting weapons. First up is Training Blade, which turns into a real weapon once the charges are used up. Instead of a random weapon, I would have liked to see it become Discover a weapon to add to your hand. It’s a decent early game weapon, and it’ll turn into another weapon later. Next, we have Axe of the Eclipse which can clear a board due to synergy with Whirlwind effects. Note, though, that it destroys all damaged minions, including yours. But it’s a great tactical card to have in a pinch. Lastly, there’s Blazing Longsword which can cleave multiple minions at a time. Great board presence, and just having it in play now forces your opponent to think carefully about minion placement, with upwards of 18 total damage that can be dished out.

Heck yeah, not only do Warriors get to wield a lightsaber, this is an affordable weapon that’ll have an impact as you transition into the midgame. It offers astronomical value for you and highly favorable trades (or delays your opponent from dropping minions due to the threat of its existence). 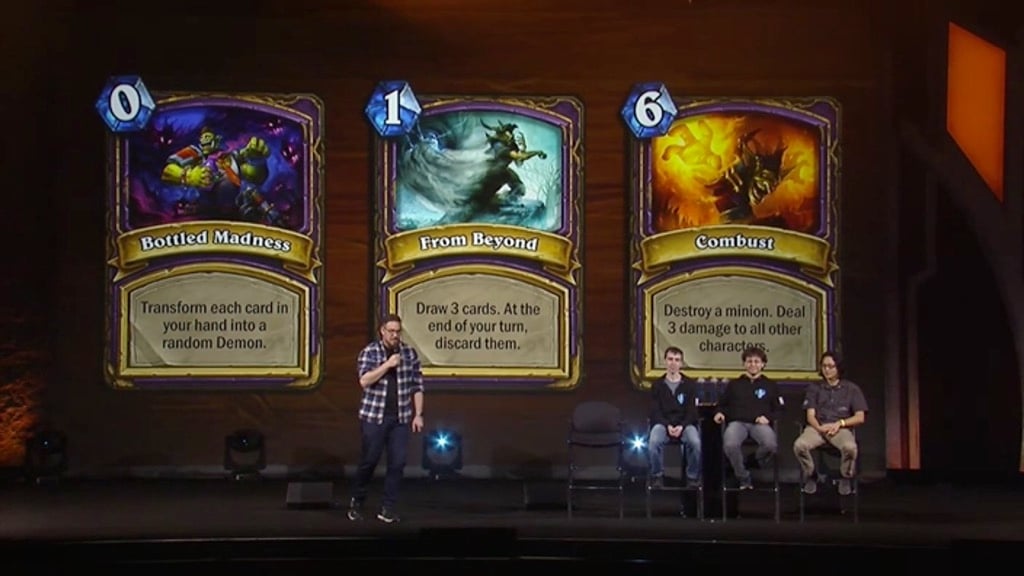 Warlocks had the toughest call out of the entire set. I would’ve been happy with any of them making the cut. Bottled Madness turns your hand into an army of demons for free. You might be able to fetch Lord Jaraxxus out of it, but you could find yourself with a Howlfiend as well. Out of the three, I feel that this is the weakest but it could stand on its own. From Beyond allows you to refill your hand with three cards, but you have to use it or else you lose it. I do love the flexibility it can provide. Combust is the final card and arguably, the most fun. You get to blow up a minion, and inflict three damage to everything.

Matticus chose: From Beyond

This was a close call, but From Beyond gets my ultimate vote. I have tendency of favoring card draw and this one’s no exception. But urgh, Combust is also attractive because I can blow up stuff! I love blowing up stuff! 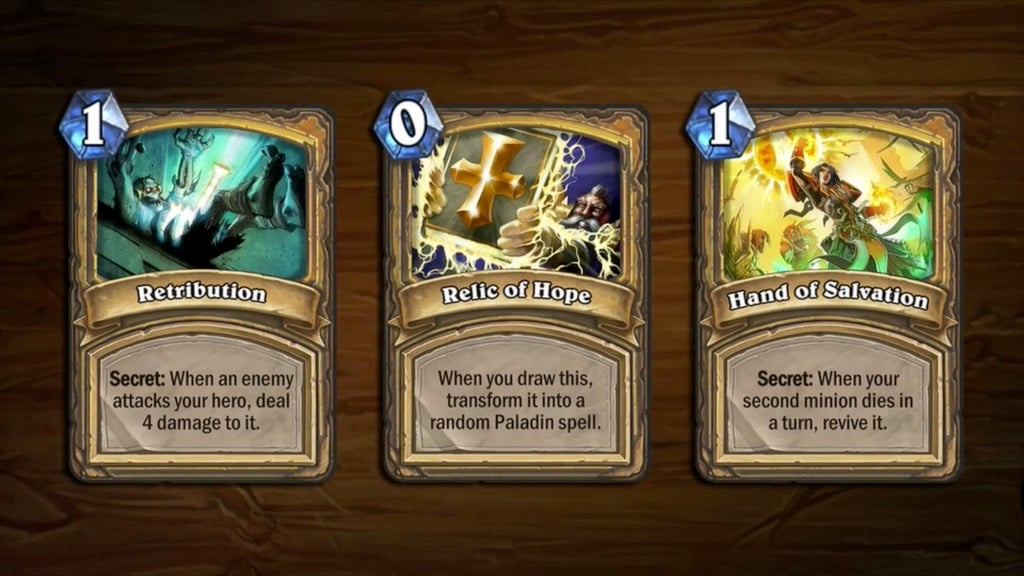 If Warlock had some of the best arena choices, Paladin had some of the worst. Two of these cards are Secrets, and those are seldom chosen. Retribution offers some form of reactive removal, but you don’t get much say in what. Relic of Hope just turns into a random Paladin spell. It could be something cool like Equality or Lay on Hands, or it could be trash like Seal of Light. The final option is Hand of Salvation, and it only puts the second minion that died in a turn back in play. It really forces your opponent to now play around minion order on the board.

None of these cards really resonated with me. I went with Hand of Salvation largely on the basis that it seems like the least bad choice out of this set. 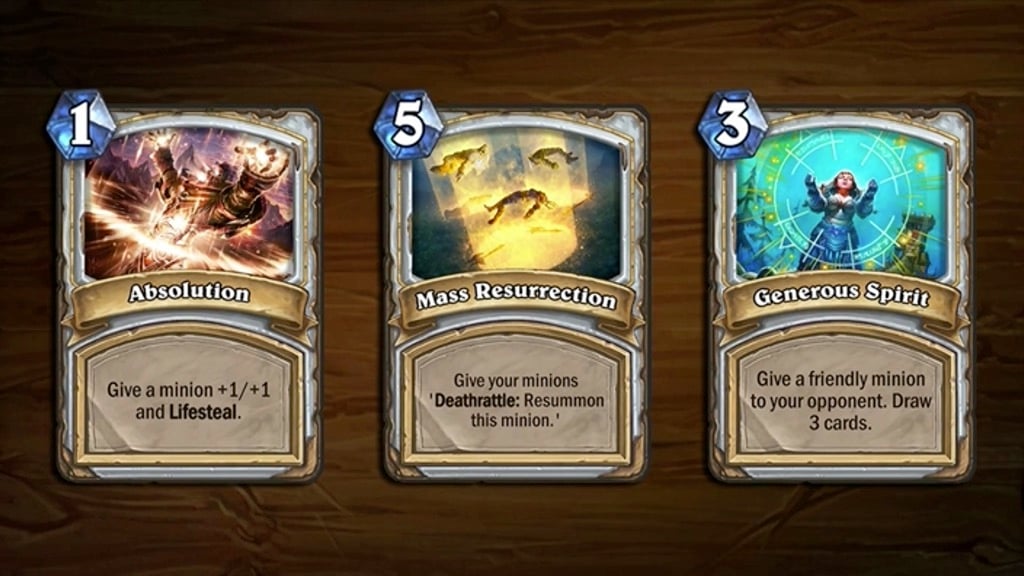 How about the Priest cards? Absolution is simple and straightforward. You can apply this to just about any minion you draft in arena. It gets a little stronger, and supplies you with added health from the Lifesteal. Second, we have Mass Resurrection which gives all of your minions on board a second chance. But you need to have a board to begin with to make total use of the spell — which isn’t bad for five mana. Lastly, Generous Spirit requires you to donate a minion to your opponent, while allowing you to draw three cards.

Yup, you guessed it. Cards, cards, and more cards. You do need to have something disposable you can send across to your opponent though that won’t come back to haunt you. It’s a conditional requirement, but should be easy enough to fulfill. 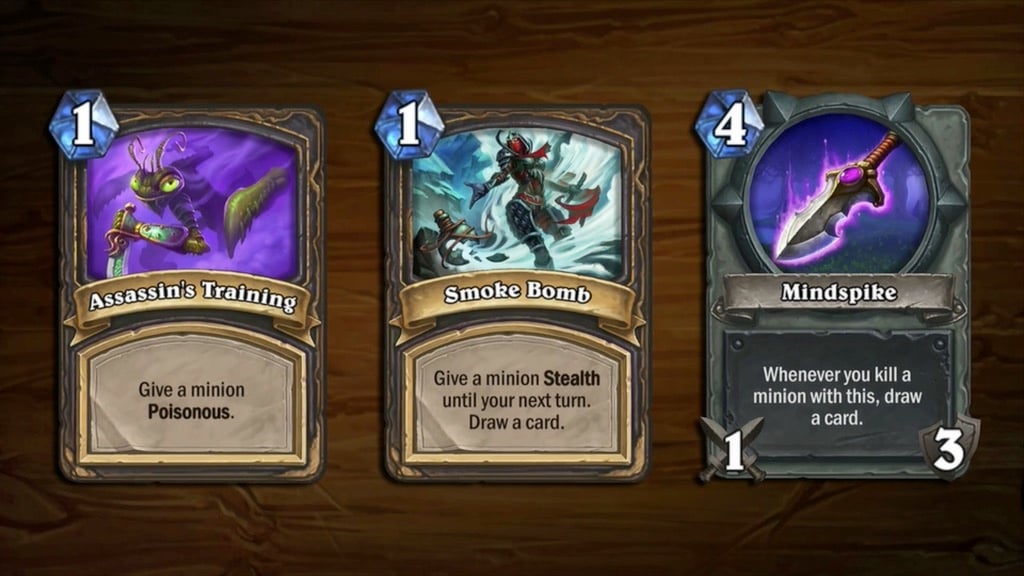 Assassin’s Training is deceptively simple. All it does is give a minion you own Poisonous. In many cases, you’d give your minion Poisonous, then use it to trade up against something that was powerful enough to deal enough damage to kill it. However, doing so means you’re on the wrong end of a two for one exchange. If you had something that was tougher like a Mogu’shan Warden, I can see it playing out more efficiently. Smoke Bomb lets you hide a minion and draw a card. If you’re crafty enough, you could play Smoke Bomb on an opponent’s minion that happens to have Taunt, and bypass it that way. Usually though it’ll be played defensively to protect a key minion on your end. Mindspike is a Rogue weapon named after a Priest ability with the upside of potentially netting you up to three cards.

The tossup for Rogue arena cards would’ve been between Smoke Bomb or Mindspike. Both of them would get me cards. Smoke Bomb gets the nod because of the price of the card, and the fact that it’s an easy combo activator. 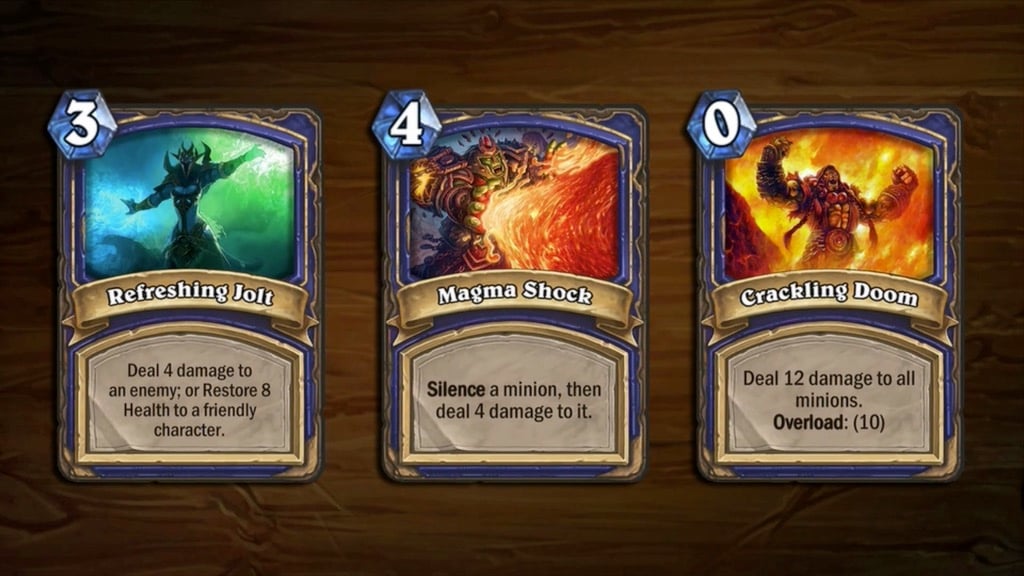 Do the Shaman cards here really need an analysis? Refreshing Jolt is a tactical option allowing you to remove a minion or keep your minion (or you) alive for three mana. Pretty good spell card and at a decent mana cost, right? The second option is Magma Shock, which lock downs and silences a minion before dealing four damage to it. It’s a much more potent version of Earth Shock. Lastly, we have Crackling Doom. It’ll cost you a turn but has the benefit of clearing the board.

I’m going to go for the fun option of Crackling Doom. You get to reset the board state with mana to spare to develop and build your own side of the board in the aftermath. Your opponent does get two back to back turns, and this could especially be harmful if they have a full hand. 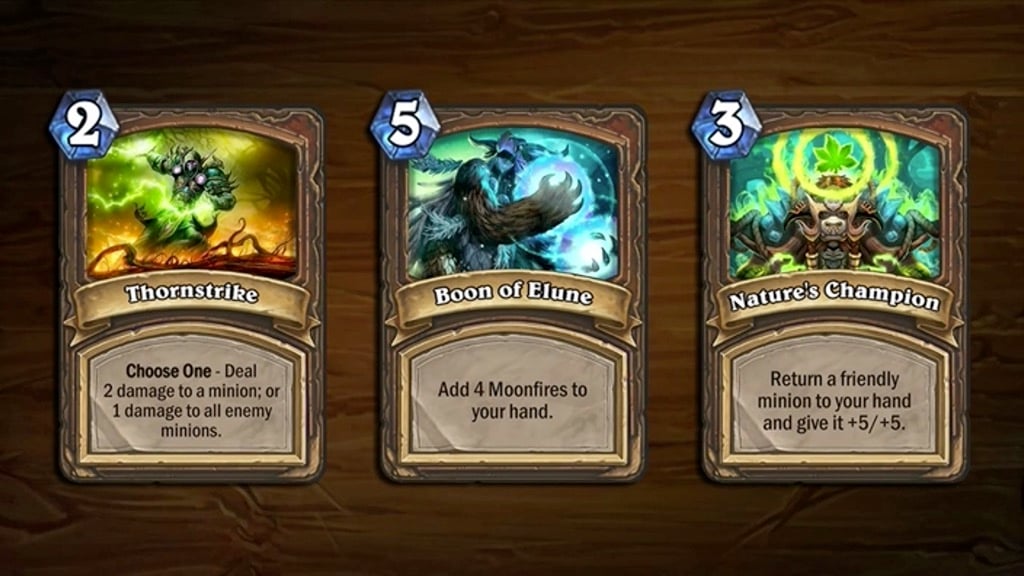 Thornstrike is the Druid’s version of Maelstrom portal. It gives Druids an early board control option instead of having to wait until Swipe. Aside from the fact that it’s fun to say, Boon of Elune can give you some extra reach with four Moonfires. It could be used to help finish off a minion you were short a few damage on, or it can be directed at your opponent. Nature’s Champion allows you to recycle an old minion in play back to your hand, refurbishing it into something with more stats. It goes up in value if the minion has beneficial Battlecry abilities.

For me, this was close between Thornstrike or Boon of Elune. Thornstrike is great in the early game but could eventually lose effectiveness. Having additional Moonfires could help you pop Divine Shields or any other annoying minions that you don’t want to divert minions into directly. Nature’s Champion requires you to have played a minion that survived long enough for the spell to be applied on to it. On top of that, you’d have to play the minion again. It just felt too mentally clunky for me.