Know Your Lore: The Zandalari Trolls at the dawn of time 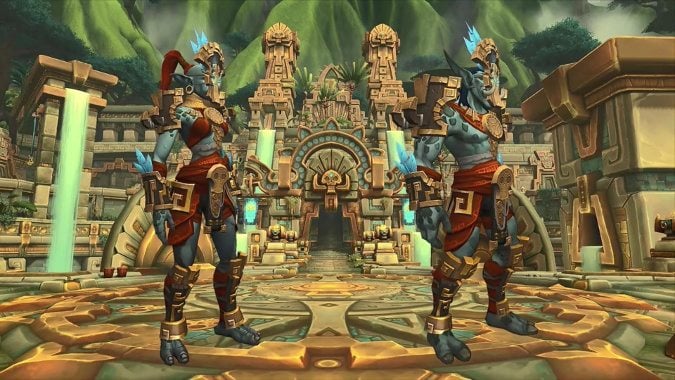 The word Zandalar means a lot of different things.

It’s the name of a mountain chain that eventually became an island when ancient Kalimdor was destroyed. Even today that island is considered neutral ground for all Trolls, sacred to them all.

It’s the name of a tribe of Trolls that still lives on that island, and which attempted recently to reunite all Trolls under their banner, only to be stopped by Vol’jin of the Darkspear and adventurers he recruited.

And it’s the name of the original Troll civilization — the wellspring from which all Trolls originally derive their culture. Whether they be Amani Forest Trolls or Gurubashi Jungle Trolls, Drakkari Frost Trolls and Farraki Desert Trolls all know that their most ancient ways derive from the long-ago Zandalari tribe.

Even on Azeroth, a world which has seen empires rise and fall throughout millennia, the Zandalari are a people of special accomplishments. And yet, they are also a people on the brink. Their island home is torn apart by conflict, slowly sinking into the seas surrounding it, and their attempts to establish a new home and unite all Trolls under their banner have come to naught.

What fate awaits the Zandalari? 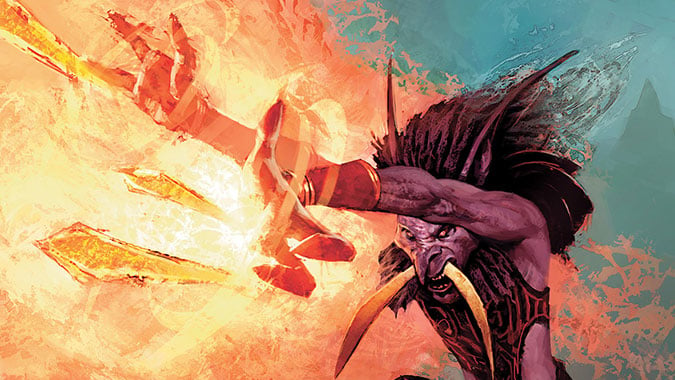 The rise of the Trolls

Originally, Zandalar was the name of a holy mountain inhabited by the Trolls. Following the war between the Titan-Forged and the Black Empire, the world of Azeroth was ordered and the wound created when Aman’Thul destroyed Y’Shaarj was shaped into the Well of Eternity. The Well was a font of arcane power and while much of that energy was funneled back into the nascent Titan sleeping within the world, some radiated out into the world at large. This power caused life to grow and develop rapidly, and among the beneficiaries of this were the beings we know today as Trolls.

Troll society was superstitious, worshiping the beings known variously as Wild Gods, Ancient Guardians, August Celestials, and so on. To the Trolls, these beings were known as Loa, and the Loa the Trolls worshiped congregated around the mountain they named Zandalar. Much like Hyjal in the north, Zandalar was a place of sacred power to the Wild Gods. The Trolls that lived farther up the mountain were considered closer to the Loa, and thus the Zandalar tribe came to be.

Over thousands of years, the Zandalar grew in power and sophistication. Their culture went from crude shrines to a vast temple complex — the grand city of Zuldazar. These Trolls eventually rose to a position of power that rivaled the Titan-Forged Mogu, and perhaps conflict might have arisen between the two peoples but ultimately they wanted little from one another. Both hated the Aqir race of insectoids that had survived the ancient fall of the Black Empire, so the Mogu and Zandalar became diffident allies. Each group held the other in contempt: the Mogu believed themselves superior due to their Titanic lineage and the Zandalar viewed their neighbors’ use of slave labor and lack of connection to the Loa to be their weakness.

The Zandalari went so far as to assist Lei Shen in his attempt to conquer Uldum, but the Zandalari priest Zulathra and many of his followers died in the process as the Tol’vir unleashed Uldum’s power to annihilate much of Lei Shen’s army. After this, both sides returned to their distant regard for one another, but the Zandalar never forgot what Lei Shen promised them for their aid: a large claim of land in the Vale of Eternal Blossoms. 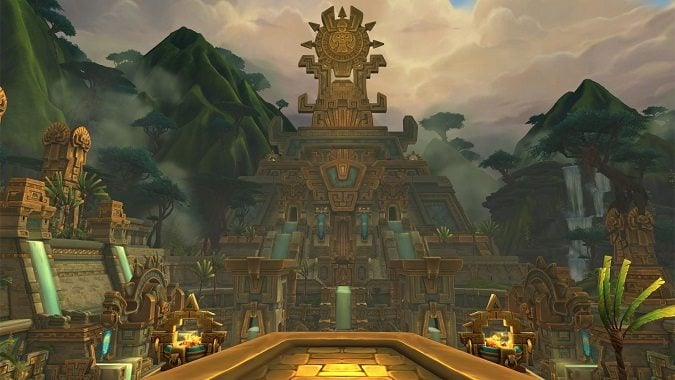 This first Troll empire didn’t fall apart to a slave rebellion as did the Mogu, nor to outside attack. It fell apart because the Zandalar didn’t hold it together.

The Trolls of this time — more than 16,000 years before the First War, 6,000 years before the War of the Ancients — were divided into a caste system with the Zandalari firmly on top. They were the priests and lawgivers of their people. As you might expect, those trapped on the bottom rung of this caste system didn’t appreciate it. Conflict was inevitable. But rather than wage war on their own kind, these Troll castes looked out over ancient Kalimdor and saw plenty of room to colonize. Let the Zandalari have Zandalar and its shrines. Soon, the ancestors of all modern Trolls left, and the Zandalar were content to let them go. They still held Zuldazar and the holy mountain, after all — the other tribes were in their estimation errant offspring who would in time return when they realized their folly.

Instead, they founded nations of their own. One tribe settled in the forests of northern Kalimdor and became the progenitors of the Amani tribe. Another found its way south into the jungles and became known as the Gurubashi. These two nations quickly became powers in their own right — expansionist empires that rivaled the Zandalar. But the Zandalar had achieved a special status. Had they attempted to hold their lessers, there would have been war. But by letting them go, they became seen as neutral in the affairs of other tribes. When the Drakkari raised a state in the frozen north, or the Farraki settled in the deserts to the south, the Zandalar were revered as their progenitors and the closest to the Loa. Only the Dark Trolls were absent from this, as they’d never chosen to be part of the Troll nation on Zandalar’s slopes.

However, the Amani and Gurubashi eyed each other as enemies. Conflict again seemed inevitable. But it was forestalled by an ancient threat. 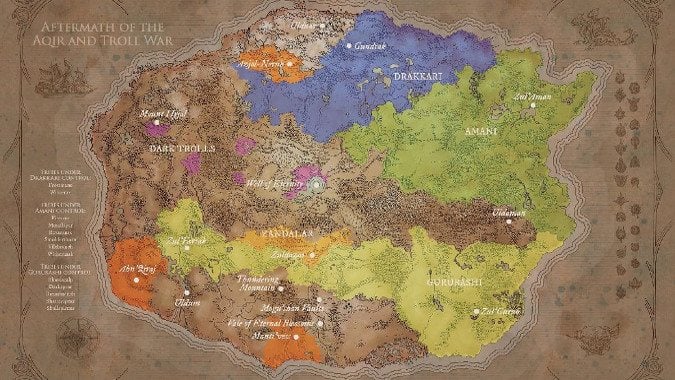 Wars of the Trolls

Having avoided war with their own kind, the Zandalar watched as the Aqir rose to attempt to reclaim Azeroth for their ancient masters. The Old Gods were chained and imprisoned — or in the case of Y’Shaarj, dead — but their servants had managed to survive and in some cases thrive throughout the world. Awakened by Kith’ix, a servitor of the Old Gods (which was itself awakened by greedy Gurubashi who ignored the Zandalari warnings around an ancient site), soon the Aqir were on the march all across the world.

They quickly came into conflict with the Trolls. Both the Amani and Gurubashi fought them, but the Zandalari didn’t get to sit the conflict out. A vast army of Aqir marched upon their sacred mountains and destroyed much of the surrounding region, creating a sterile wasteland that to this day endures as the blighted wastes of Vol’dun.

The Aqir were ultimately defeated, but the war with them taught the Zandalar that their southern neighbors, the Mogu, were no longer in power. If they had been, the Aqir wouldn’t have been able to simply march north and attack the Zandalari without warning. It quickly became clear that the Mogu had fallen and with their fall came an opportunity for the Zandalari. The young Pandaren Empire that had risen in the wake of the Mogu defeat was pastoral and peaceful, with minimal armed forces and no standing army.

The Mogu had promised the Zandalari land in the Vale of Eternal Blossoms, one of the most fertile regions in all of Azeroth. And with Vol’dun destroyed the Zandalar were feeling the pressure of feeding their people. 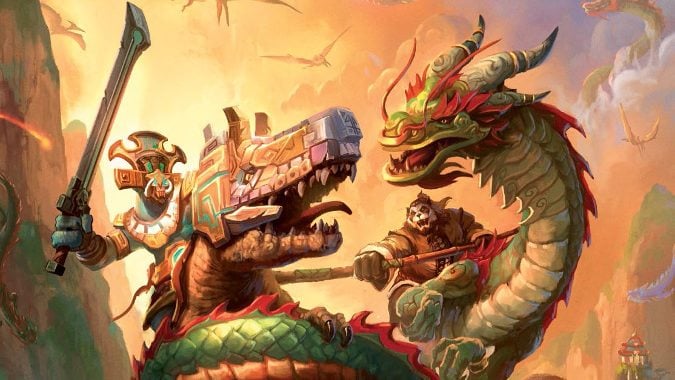 There was some debate about how best to proceed. While the Mogu had promised the land to the Zandalar, they’d never needed to make good on the promise and they doubted the Pandaren would honor a Mogu pledge. Some thought diplomacy would gain them the territory but in the end Mengazi, a descendant of the Troll priest who’d first brokered the alliance with Lei Shen, convinced his people that force was the best solution.

At first the Zandalari had great success against the Pandaren. The only real opposition to them was an order of monks who mostly served to deter attacks by the Aqir-descended Mantid, and were unprepared for the Zandalari onslaught. Flying Zandalari on pterrorwings and bats and mounted Zandalari on raptors and other dinosaurs wielded  the power of the Wild Gods and drove into the heart of the Jade Forest. The assault threatened to topple the Pandaren Empire and Mengazi seemed poised to not only gain the promised territory, but all of Pandaria.

But Pandaren are adept at handling the unexpected: a young Pandaren woman named Jiang countered to the Zandalari flyers with her cloud serpent Lo. Other cloud serpents became flying cavalry and the the Zandalari advance stalled. Mengazi decided on a desperate gambit — he would resurrect the fallen Lei Shen, who would in turn annihilate the Pandaren usurpers and return Pandaria to the hands of the Mogu. A pitched battle at Lei Shen’s tomb saw both Jiang and Mengazi slain and the Zandalari assault broken.

Zandalar never had a chance to push its territorial ambitions again. A new power had already begun to rise around the Well of Eternity, and while they’d been busy dealing with the Aqir and making war on the Pandaren, that power — the Kaldorei — had grown to dominate much of Kalimdor. Soon all Trolls would learn to hate these so-called Elves.

Next time, we’ll talk about the War of the Ancients, the Sundering, and the long decline of the Zandalari.