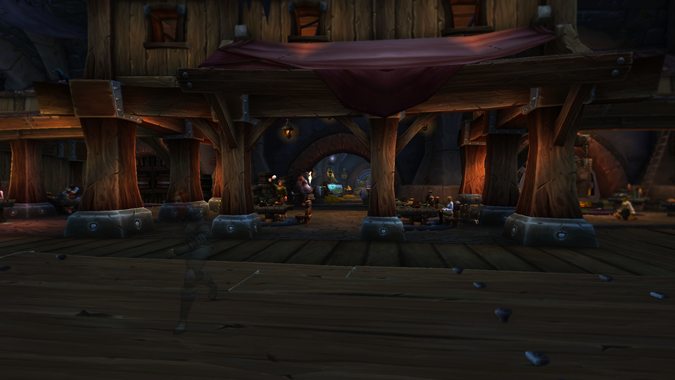 The Rogue Class Hall in the Underbelly is a safe haven for Rogues actively avoiding being turkeyfied…unless their fellow Rogues happen to be toting a turkey-shooter. Fun story though — the whole Class Hall is full of Rogues, yet you can’t actually shoot any NPCs. I mean…a Rogue is a Rogue, right Blizzard?

Come on. Griftah’s been asking for it all expansion. Lemme make him gobble gobble.

Question for the Queue: Do you think that Cold Weather Flying will still require level 68 in 7.3.5 or will it be changed to along with the scaling changes?

Considering they’re framing it so that you can level in either Burning Crusade or Wrath all the way up to level 80, I’d assume they’re probably going to look at that and address it if needed. Keep in mind, though, that when Burning Crusade originally came out, you couldn’t actually fly until level 70. The required level was changed when the Argent Tournament patch came out in Wrath.

Also keep in mind that the entirety of Northrend is meant to take you from 60-80 with this new scaling system. You didn’t actually need to fly in Northrend until Storm Peaks. If scaling works out correctly, you won’t hit areas where flying is absolutely necessary until you’re higher level. Regardless, I’m pretty sure this is all part of the stuff they’re looking at while they prepare these zones for expanded leveling — people have been very vocal about how important flying is to them, and I don’t think Blizzard would just ignore that at this point.

QftQ: Do you think there’s a shot of a couple playable races becoming available prior to BFA’s launch, whether through pre-orders or in general? It seems like the system would allow them to be patched in early if Blizzard felt it would give players more content in Legion’s tail end, as long as the race’s models, animations and story were complete.

It’s…possible. Highmountain, Nightborne, Dark Iron, and Lightforged Draenei are all readily available to chat with in game as it stands right now. Void Elves and Zandalari feel like they’re more contingent on having more story available — Zandalar is part of Battle for Azeroth, and right now Alleria’s the only thing remotely resembling a Void Elf in game. It feels like there would need to be more story for either of those two Allied Race options, and that’s something that would play out when the next expansion comes out.

It would also add a heck of a lot of new stuff for people to do, because Allied Races apparently start at level 20. Given that we’re going to see some of that old-world scaling to help with leveling before Battle for Azeroth comes out, it would certainly make leveling an Allied Race a little easier, wouldn’t it? I mean, I wouldn’t hold my breath on it or anything, but the potential is there.

QftQ- If old world scaling has any affect on drop tables (and I hope it will!),, what classic loot would you farm first?

I’m not sure if it’ll actually have an affect on anything at all, to be honest. If it does, I’d go back to Burning Crusade and resuming farming leather sets from the dungeons. There are still pieces there that I’m missing from my collections! Raids, on the other hand…well I have every set available with the exception of the most current raids (and I’m working on those!).

Q4tQ: With the updating of Stromgarde and potentially making that zone relevant again, do you think Blizz would ever revamp or update battlegrounds? For the record, I kinda hope they never do, but I’m just wondering, seeing as they’ve made updates to dungeons and other old world content already, if they would ever touch BGs.

I think anything they’d do to the Battlegrounds would just be visual or gameplay updates for PVP Brawls. You know, just temporary changes made to switch things up a little bit every now and again. I don’t really see them doing any kind of major updates or large scale changes to the Battlegrounds we already know and love (or in some cases, actively avoid) — I think they’d rather focus on giving PVP players new Battlegrounds to play with.

For Twitch Prime subscriptions (from the user POV) — do they still clear at the end of the month?

I remember when Twitch Prime launched it did, so each month you had to manually click your subscription on your favorite streamer. Was inconvenient, especially if you don’t “Twitch” much.

Yep, it still works that way — you can subscribe to a channel for free with Twitch Prime, but it’s a 30 day subscription. After the 30 days are out, you can re-subscribe again with your free 30-day subscription. It’s a little tedious to remember, but it works!

Reposting. Q4tQ: What is currently out there regarding the future of the Legion Companion app? WIll it be redone for Battle, or is it doomed to become an artifact on the respective mobile application stores?

Good question! We have no idea currently. I know they mentioned at BlizzCon that they liked the mission system, but we didn’t get any information in regards to how or where it’s going to be implemented in Battle for Azeroth. Regardless, I think the Legion app was pretty successful — a lot of people use it, and it’s really handy to have around. Given its success, I’d say if they can find a way to implement a new app alongside whatever we’re going to be doing in Battle for Azeroth, we’ll probably get a new one. It all depends on what we’ll be seeing and doing next expansion!