Who actually burned down Teldrassil?

One of many shocking reveals from BlizzCon 2017 was that Teldrassil — Darnassus, Shadowglen, and all — burns to the ground in Battle for Azeroth. And while the Alliance are going to get their vengeance by besieging the Undercity, the burning of Teldrassil is no less devastating a blow. But who actually landed that devastating blow?

Many of you are probably thinking it was Sylvanas since she’s literally front and center when it burns. But there are a few clues out there that point to it being someone else. Chief among those are Alex Afrasiabi’s words at the World of Warcraft: What’s Next panel: “Why would the Horde burn Teldrassil? … Why would the Alliance attack the Undercity? … It doesn’t matter who fired the first shot…”

Perhaps it’s the just conspiracy theorist in me, but I find the way he chooses his words to be peculiar. He allows for no singular blame to be attributed to the burning and leaves the issue of “first shot” ambiguous.

Please note: This post not only contains spoilers for the end of Antorus and patch 7.3.5, but it’s also all pure speculation at this point.

Let’s get the obvious one out of the way first. Sylvanas Windrunner is Warchief of the Horde — the same Horde that Afrasiabi does indicate burn Teldrassil. It makes sense that, if “the Horde” burned Teldrassil, then the leader of the Horde would be the one who ordered the attack, right? Well, maybe — but then we have to ask why.

One reason could be that Teldrassil became a huge source of Azerite, the lifeblood of Azeroth that began to bleed from the planet after Sargeras plunged his sword into Silithus. Azerite is incredibly powerful substance, and if there were a large concentration of it in Teldrassil, it would give the Alliance a huge advantage over the Horde.

So what do you do if you’re the Horde? You try to take it from the Alliance. And if you can’t take it for yourself? You destroy it. In terms of war tactics, it’s a logical course of action. But in terms of Sylvanas, it seems out of character. There is, however, someone I can see it being in character for — someone very close to Sylvanas.

Nathanos is the right-hand man of Sylvanas, someone whose dedication is unquestionable — possibly to a fault. He’s been in World of Warcraft since the very beginning, but recently he gained much more prominence starting in Legion. After the initial attack against the Horde in Stormheim, Nathanos led the Horde forces in the area in a search for Sylvanas. In his efforts to track the Banshee Queen down, he proved to be not only ruthless but also intensely devoted. “Her will is her own, it is not my place to question. Only to obey.”

In other words, if Nathanos were sent into Teldrassil on Sylvanas’ orders, completing his mission and/or protecting the Dark Lady at all costs would be his top priority — no matter what that meant. If he saw burning Teldrassil the only way to complete his mission and serve Sylvanas, I have no doubt that he would burn it without hesitation.

But willingness is not the only reason to suspect Nathanos. Turn, for a second, to two pieces of outside content. The first is the fact that Nathanos and Saurfang both have new models in the patch 7.3.5 files, despite Nathanos having just gotten one in Legion. What if the reason these two have new models is because they’re going to be used in a cutscene that shows the burning of Teldrassil? That might sound like a stretch, but bear with me.

In the Before the Storm prologue, Nathanos has just returned from the Undercity to meet Sylvanas — alongside Saurfang — in Orgrimmar. When he sees her, she remarks, “Another quarter of an hour, and I would have been forced to ride without my champion beside me.”

If Nathanos is the one who set fire to Teldrassil, it wouldn’t be surprising to find he’d died in the explosion. And that would also explain his absence during Undercity’s siege. Of course, there’s another reason he might be absent — he might be off taking care of another group. A group that we could also attribute the burning to.

The other option is new and relatively unheard of, but still capable of such an act — the Desolate Council. Who are they? A group of Forsaken dissenters who filled the power gap while Sylvanas was in Stormheim, a “governing body to tend to the population’s needs.” Turning again to the Before the Storm prologue, Nathanos discusses the Desolate Council as a group who does not want what Sylvanas wants. They don’t want the same eternal life that Sylvanas was seeking through the Val’kyr.

Remember what happened the last time we had a splinter group of Forsaken? That’s right, we got the Wrathgate and subsequent Battle for Undercity. And both of those embarrassed and undermined Sylvanas as a leader. If the Desolate Council knew Sylvanas was making a move against Teldrassil, it’s possible they’d arrange for its burning. Why? As a way of framing Sylvanas and forcing both the Horde and the Alliance to turn against her. On top of that, it’s entirely possible Sylvanas would opt to take credit for it rather than appear as though she’d not in control of her people.

That said, the prologue appears to address this quickly — Sylvanas’ mind immediately jumps to the Wrathgate before her worries are quelled by the realization that Nathanos would not discuss a coup so casually. And Nathanos affirms that by reading her face and assuring her “all is calm [in the Undercity].” On top of that, it’s hard to imagine how a group of dissenters could find a way to burn Teldrassil and have planned far enough in advance to carry it out at the same time Sylvanas happened to be there.

An outside malevolent force

Of course, there’s always the chance that Afrasiabi not attributing “the first shot” to anyone in particular is a way of talking around the real perpetrator. We’ve seen hints of Old God machinations throughout Legion, and Sargeras’ sword plummeting into the same region that’s home to C’Thun is more than a little suspect. Similarly, it wouldn’t be the first time Old Gods have manipulated mortals into conflict.

This would be a way to divert players’ attention away from the “real” conflict of the expansion while still tying everything together in a plausible way. The only reason I’m hesitant to attribute the burning to a manipulative force is because we’ve seen that plot in Warcraft before. That and it somewhat lessens Battle for Azeroth as a Horde vs. Alliance expansion.

That said, it’s entirely possible and would still make for a solid middle-of-expansion pivot. Plus, we’re due for some Old God action. But if you ask me, there’s a way to explain it all that doesn’t involve Old Gods. 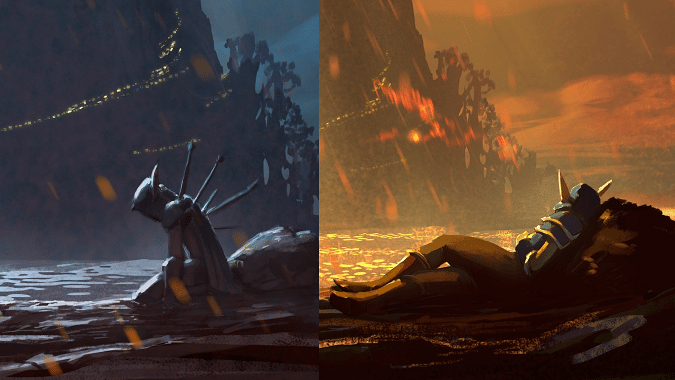 More than anything else here, this next bit is pure guesswork — albeit entirely plausible. And it’s all thanks to one key detail in the artwork. In her approach to Teldrassil, two people walk beside Sylvanas — Saurfang and Nathanos. Then, when Teldrassil is burning, Sylvanas is front and center… but still back on Darkshore. So where does that leave the other two?

Several people have speculated the Elf to the right of Sylvanas in the “Approach to Teldrassil” picture to be Vereesa. If so, this would explain two things. The first is why Sylvanas would have stayed behind and let Saurfang and Nathanos lead the attack. The second is why the dying Elf changes positions between the two images. There aren’t a whole lot of Elves Sylvanas would position honorably in death — but Vereesa is one of them. And if Sylvanas were to do so, she’d likely want their final moments to be private.

My theory is that Vereesa dies in the approach to Teldrassil, and Sylvanas stays behind to have a moment with her. Before she actually makes it to Teldrassil, Nathanos takes measures to the extreme and burns it down. Perhaps he dies in the process — explaining his absence in the Battle for Azeroth cinematic. Or perhaps he and Saurfang both make it out and he’s leading forces elsewhere in the cinematic.

Regardless of who burned Teldrassil, it’s clear that there are several moving parts. Those parts make it entirely possible someone other than Sylvanas is responsible for its burning. Hopefully we’ll find out soon — but until we do, it’s fun to speculate.

Blizzard Watch is made possible by people like you.
Please consider supporting our Patreon!
Filed Under: Battle For Azeroth, Nathanos, Sylvanas, Vereesa Death, Who Burned Teldrassil
Advertisement