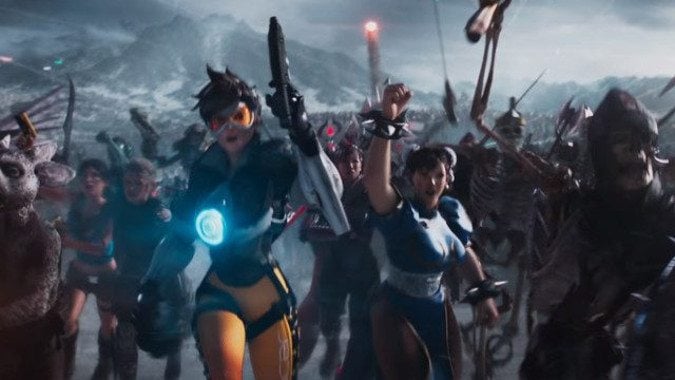 If you don’t know what Ready Player One is, it’s a Steven Spielberg movie based on the novel by Ernest Cline and it’s basically a paean to nostalgia wrapped up in a homage to the internet — the story of a young man, a virtual reality, and an easter egg that everyone in both the real and virtual worlds is ready to kill or die for. And amazingly, that seems to include Tracer.

The Oasis — the VR of the movie — is a place wherein you can be anyone and anything you want, and that seems to include virtual versions of famous characters. People have seen the Battletoads, Freddy Kruger, the Iron Giant, and now we’ve got this trailer which clearly shows us Tracer herself. As Overwatch‘s face character, if anyone from the game was going to pop up next to Chun Li it’d be her, but I’m just kind of amazed at what this says about Overwatch‘s success over the past year and a half. This is a game that just came out and it’s in there with pop culture references that date back decades.

Although since the film is set in the 2040’s Tracer would still be a very legacy nostalgia drop by that point — more something you’d expect 40 year olds to look back fondly one, which makes sense considering the Oasis’ role as a kind of enhanced Second Life or omni-MMO where you can play as your own mash-up or just blatantly steal a character. It kind of reminds me of what you’d get if City of Heroes had been run on Skynet. Still, I can’t help wonder what this means for the future of Overwatch. I mean, it’s just a cameo, but could we get more? Could Overwatch finally get that Netflix series I think it deserves? Time will tell, but seeing Tracer up there with iconic figures makes me hopeful.

Blizzard Watch is made possible by people like you.
Please consider supporting our Patreon!
Filed Under: Ernest Cline, Ready Player One, Steven Spielberg, Tracer
Advertisement