The Queue: The Queue that is absolutely not all about Gnomes 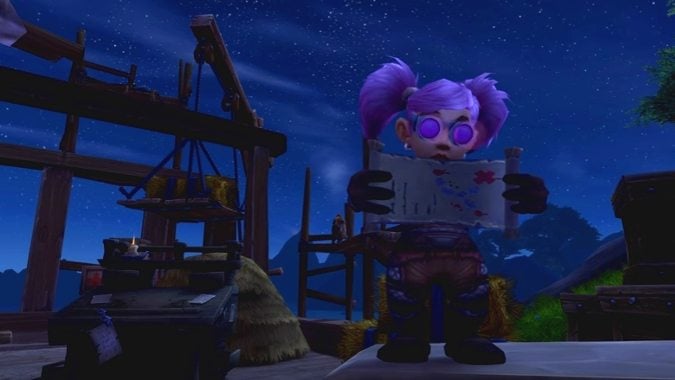 Gnomes? Talking about Gnomes? Here? In the Queue? Me? I would never!

I mean, I’m way too busy trying to win a Hearthstone dungeon run to even think about Gnomes. Definitely no Gnomes here.

Q4tQ: do certain races stigmatize certain player classes? (Aside from warlocks, death knights, and Demon Hunters) I recall a discussion that occurred when Orcs got to be mages. It had me imagine a scenario where an Orc child tells his father he wants to be a mage instead of a warrior when he grows up. The father then storms from room saying “I have no son, I have no son”. Ignoring the analogy that could be made to real world family issues. I started wondering if social moors would dictate that any player race be made to feel ashamed of playing certain classes.

This is one of those problematic places where game lore and gameplay don’t work neatly together. There are a lot of class and race combinations that perhaps don’t make sense, or would only really make sense if they were customized a bit, as Gnome Hunters were.

On which note, I think Gnome Hunters having their own special tweaks that gave them a real Gnomish identity was awesome, and I’d love to see it with more of these slightly “off” class/race combos. Like Gnome Priests, which also doesn’t make a lot of sense in my head. (In my head, Gnome Priests makes just as much sense as Orc Priests, and Orcs are the only race that can’t be Priests.)

And somehow I’ve made this all about Gnomes. How did that happen? Who would have expected it?!

QftQ, inspired by Red’s Hearthstone comment below: As someone who’s only played Hearthstone for maybe fifteen minutes total, is the new solo mode something that might help a complete newb get into the rest of the game?

The biggest barrier to entry to Hearthstone is cards. You need cards to build decks and play in most game modes, and you start off with a handful of basic cards that won’t get you far — especially against other players. That makes it tough to get started.

But the new Dungeon Run mode just gives you a deck to play with. As you win matches, you can select new cards to add to your deck, so you get more powerful. This lets you play without having to stress about collecting cards or building decks: all of that just happens automagically as you go.

However, there’s still a big learning curve. There are lots of cards in Hearthstone, all with different abilities, strengths, weaknesses, etc. While dungeon runs do give you cards to play with, they don’t do anything to introduce them — and you do see more advanced cards a lot sooner than you would otherwise. So the learning curve may be a bit tough, but the runs do start you off with easier bosses and then scale up (I still can’t defeat the last one, myself).

In the end, it’s free, so give it a try. Either you’ll have fun or it’ll annoy the heck out of you, but you’ve lost nothing but time.

Be aware, though, that the cards you get here aren’t added to your collection outside of dungeon runs. So if you have fun doing this and want to play more, you’ll still have the problem of having few cards to work with… and that could be pretty frustrating, too.

Q4tLiz: What Gnome story do you want to see in BfA?

Quite frankly, I’d be thrilled to see any significant Gnome story in Battle for Azeroth. Ferocitas noted in the comments that Gnomes and Goblins are probably working at weaponizing Azerite. If we dug into what, exactly, they’re doing (and helping them along) instead of the game simply saying “Hey, Azerite!” that could be a fun way to involve these typically underserved races.

But we’ve seen a lot of Gnomes as engineers. I’d love to see more of Gnomes as fighters, like Mekkatorque in the Legion trailer. Because, yes, Gnomes (okay, Goblins too), are tremendously clever, but how can we use that cleverness… you know, beyond blowing ourselves up?

Q4tQ: Should Caverns of Time archive entire zones (Kalimdor etc) for occasions when things change, ala Cata or BfA?

Before BlizzCon and the announcement of WoW Classic, I would have unreservedly said yes. I miss the old versions of the world and would love to be able to go visit them. But… now that’s a lot of what Blizzard is doing in Classic. Caverns of Time versions of old zones would just be old zones, but with current classes and abilities.

Do we need that? I’m not sure… though how I feel about it will depend on how much WoW Classic winds up costing us. (As, yes, I’m one of the people who will be on the Classic nostalgia train, though who knows how long I’ll stick it out.)

And that’s all for today, folks. Come back tomorrow for the enchanting Anne Stickney, who will be happy to answer the lore questions that I inevitably ignore. Ttfn!