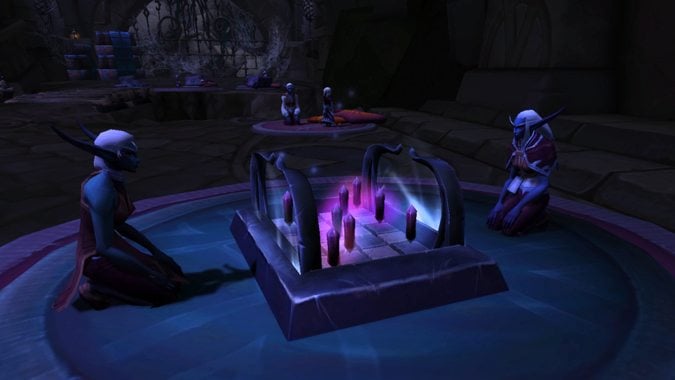 I don’t know what kind of game these guys are playing in Shal’Aran, but it looks absolutely fascinating. Sort of a 3D floating chess kind of thing. Can we get this in game please? It looks like something my jewelcrafting Rogue would enjoy making, I’m just saying!

Q4tQ: Should players be removed from the Alliance/Horde altogether and be some sort of mercenary faction, doing work for both/either side to perhaps try and push some sort of multi-expansion b-storyline to decide upon a winner once and for all (either letting a faction win or a particular race)?

I don’t really think players need to be removed from either faction — and honestly, what you’re suggesting would really upset a lot of people. Like it or not, the two-faction dynamic has been there since day one. I don’t think Blizzard needs to remove it, it’s kind of the backbone of the game at this point. If anything, they need to learn how to write a compelling story around it. Alternatively, call a cease-fire on the faction battle entirely, and write off PVP as simply war games between the two factions to keep them in shape for combat against other, bigger enemies.

That’s the thing — PVP has never had a large, compelling story surrounding it. It’s not meant to be for story, it’s meant to let players pummel on each other. The faction war is a really good baseline reason for the presence of PVP in game. As long as the faction conflict is there, there doesn’t really need to be any kind of justification for PVP at all. In that aspect, the faction conflict is useful.

There’s no easy solution to any of this. But the onus is really on Blizzard. They either have to find a way to tell that compelling story around the faction conflict, or just push the conflict to the side in favor of other, cooler stories. Battle for Azeroth feels like an attempt to embrace the faction conflict and actually give it a full story. Whether or not that story is successful…well we kind of have to wait and play through the expansion and see how it all plays out.

Q4tQ: do you think if I do the achievement for exalted of a faction on the opposite faction to the allied race I wish to unlock will it work? Asking for a Blood Elf friend…

We don’t really know just yet! But just as a guess, I think you probably need to be exalted on whichever faction you want to play. Think of it like this: If a race is going to ally with you, they probably need to really like you first. If it’s an Alliance race, like the Void Elves, they it makes sense that they’d need to really like an Alliance character. Keep in mind I’m just making a logical guess here, I could be completely wrong.

It doesn’t take too long to get exalted with the Argus factions — I managed to hit exalted with both of them on my Horde character long before Antorus opened up. Since we don’t really know either way, I’m just going to quietly work on World Quests and getting exalted with one of my Alliance alts while I’m waiting for more information. We’re also in the middle of a World Quest weekly bonus event, so hey, that +50% reputation is coming in really handy right now. Battle for Azeroth is still a ways off, so might as well start working on it now, right? Just in case.

Q4tQ: If they were to add a new Forsaken appearance along the lines of Nathanos, the could only be unlocked via completing a rather grim questline, would you do it?

Oh boy. The idea is kind of tempting — Nathanos’ appearance is pretty amazing. At the same time, I’m really attached to my Forsaken as she is. I love her glowing golden eyes and scrawny little limbs and default slightly startled expression. I don’t think she’d look “right” in my head any other way. I do like the idea though, even if I wouldn’t personally do it. More customization options are always pretty aces in my book. Story stuff is also aces. Combining the two? Sure, why not?

Q4tQ: What game should blizzard steal(borrow) a new mechanic from to make Wow better?

I’m going to duck back to my other favorite franchises, Dragon Age and Mass Effect, and say the passage of time. …I know, that’s super vague. Basically, in the DA/ME games, you could go back to places you had previously cleared, and you’d see evidence of what you did, and how that affected people. It gave you the sense that yes, time had passed, and more importantly, that your actions had meaning. It felt like the stuff you did totally made a difference, you know?

There have been brief moments in WoW where that occurred — but it was just that, brief moments. Big things are kind of glossed over. Nobody in Shattrath talked about Illidan’s defeat. There wasn’t really a reflection of the Lich King’s fall outside of Dalaran in Wrath — capital cities seemed largely oblivious. There’s been no repair to any of the damage sustained in Cataclysm. The Vale of Eternal Blossoms is still a wasteland in Mists. Overall, it feels like we move in, wreck things, and then move on without fixing anything. We leave residents to just kind of fend for themselves, and we have no indication that they’ve done anything.

Unfortunately, I don’t really know if that kind of change is feasible in a large-scale MMO. I mean, we’re talking two different genres here. It’s easy enough to show these things to a single player playing through a solo RPG environment. It’s a lot more difficult to make that kind of progression happen naturally for millions of players who are all at different points in the established in-game timeline. Blizzard has the ability to phase environments, which is pretty incredible, but I don’t know just how much that technology is capable of handling. Not to mention the servers themselves! And of course you run into phasing issues like players not being able to see each other, because one of them didn’t complete the right series of quests.

So it’s one of those wistful kind of “gosh it would be nice” ideas, rather than anything absolutely feasible. But maybe one day? Who knows where technology is going to take us.

Q4tQ: Current whispers from the data mining seem to suggest we’re going back to the Old God well. Good bad or indifferent?

Does anyone seriously think we’re done with the Old Gods for now? They were way too present throughout Legion to go away entirely. We never really resolved anything with them, other than the defeat of the Emerald Nightmare — and even that defeat is questionable, given the presence of that remnant of the Void. Ysera’s spirit pretty deliberately points at it in a “Yeah no, we’re not done here yet” sort of way. Xal’atath’s been way too chatty throughout the expansion. Heck, even Azeroth was having nightmares about the Void — we fixated on the Sargeras part of those visions, and ignored the Void bits.

We have a reckoning coming. Whether or not we’ll see the full scope of that reckoning in Battle for Azeroth is questionable at this point. But the Old Gods haven’t gone away. We have yet to properly deal with them. I’m glad they aren’t just letting this plot thread drop — I’d much rather see it continue. But then, I like all that Old God stuff!

Question for the Queue: if Blizzard were to do a Bethesda’s Skyrim style game which universe would you what it set in?

If we’re talking a Skyrim-style game with crafting and gathering on top of quests and stories, Diablo, definitely. I feel like the game could make that kind of transition and still feel very Diablo. Goodness knows Diablo’s lore is just as convoluted, involved, and utterly fascinating as the stuff you’ll find in The Elder Scrolls titles.

If we jump back to a more Bioware-style title, that’s where I’d like to see some kind of single player Overwatch RPG. Set it back in the days of the Omnic Crisis, let us play out the events of that global conflict and the establishment of Overwatch. Sequels could work within the timeline of Overwatch’s heyday and eventual fall. It’d make for one heck of a trilogy. Also, romance options. I just want to make them kiss, okay?

But honestly I feel like if Blizzard wanted to go the open-world adventure RPG route, they’d be better off going with a completely new IP. We love all their established IPs the way they are. Why not throw us something entirely new? It worked out pretty great with Overwatch, didn’t it? They’ve got a really talented team of storytellers over there, it’d be fun to see what kind of new things they could come up with.