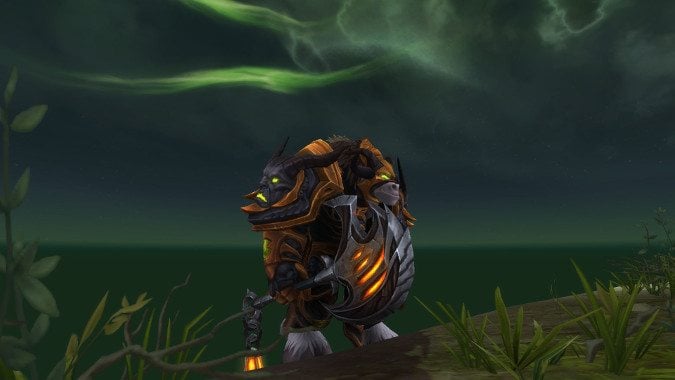 I started writing about World of Warcraft for a site that doesn’t exist anymore back in 2007. The game and I have both changed greatly since then. My very first article had a picture of my Tauren Warrior on the header. So does today’s Queue.

Also congrats to Ember, who made her first quest today.

I am worried. First, when I saw the preview for Legion I was in love. I thought, “Damn, that looks like the best xpac ever!” And it lived up to the hype well. With BfA I was like, “Oh…so that’s the one that was right. Ok.” So I get this sense it won’t be as good, just from what they’ve shown so far.

But, worse, a lot of work is done in advance of an xpac. During Legion, A LOT of long time people left Blizzard, or are still there but left the WoW team. I feel a lot of soul of WoW has left, and I think this will affect the game. I’ve said this before, and quickly got a lot of responses that I’m wrong, but we’ll see.

I mentioned up in the header that I’ve been writing about World of Warcraft for ten years. In that time, I have heard that the soul of WoW has left the following times:

I’ve probably heard it more than that. The thing is, Blizzard hires and brings new people in all the time, and moves people around to different teams. The game has never been all about one person, and considering that they hired Christie Golden this year to work on their story team? I don’t think for even a second that they’ve lost their soul.

Will the next expansion be as good as Legion? Maybe not. That’s a tall order, as Legion has been a heck of an expansion. But I don’t think that we have to worry about World of Warcraft having lost its way just yet. Give the expansion a chance to come out and we’ll see.

There’s great people working at Blizzard on WoW. Give them a chance and let them show you what they have in mind.

I may be one of those odd players who *doesn’t* enjoy constant and/or massive escalation in WoW. It’s a game that has lasted over a decade now, which is amazing, and I’d like it to last another decade or three. Huge story leaps that we’ve seen in Legion give me that nagging feeling in the back of my mind that Blizzard is wrapping things up – whether a rational fear or not, that’s where my brain goes sometimes – and I’d be fine if they slowed down the pace for at least one expansion.

I feel like there’s validity to your points, Eliza. I don’t want every expansion to be Legion. It would be too much if we kept seeing world-shattering stakes constantly ramp up the way they did this expansion. As good as it was sometimes I felt guilty doing a simple mog run because The Legion is here and the world is burning and you’re wasting time in Molten Core!

I know that there’s still big stakes in BfA and that’s fine, but I hope it’s a more gradual expansion and it has some quiet moments. It’s going to be funny when the Dragon Aspects learn that Deathwing tricked them into giving up their Aspect powers to destroy him forever when he’d already placed his essence in Wrathion and all this time Wrathion’s been a ticking time bomb about to hatch with Deathwing’s evil, but I think it’ll be a good surprise for us.

I made all that up. Don’t panic, okay?

Seriously I’d be okay if BfA focused on some smaller scale stories in between the faction war and such.

Q4tQ: We know what the next expansion is opening with – where do you see it going – what do you think (or would like) will be the setting for the final raid and what will it be leading us to for the expansion to come after Battle?

In general terms, I see us fighting both each other and the Old Gods, with the interference/participation of beings like Azshara who have a stake in both the fate of the world and the machinations of said Old Gods. My hope is that Azshara, if she appears at all (and I would prefer she not) is a major presence and end boss of a mid tier raid, the way Kil’jaeden was the end boss of Tomb of Sargeras. But I’d rather Azshara got to be the major figure of an expansion all her own.

I expect one of the starter raids will be the Titan facility in Zandalar that’s connected to the ‘Blood God’ in some way, and I’m hopeful that said Blood God is related to Hakkar, since he was the Blood God the Zandalari fought in the old days when we were raiding Zul’Gurub. The last time we saw Hakkar, he’d escaped Jindo, who was working for the Zandalar, so it would make sense for Hakkar to take the fight to them.

So what I’m musing about would be a starting tier of raids including the Zandalar Isle Titan facility involving Hakkar, a Kul Tiras raid involving the mysterious Sea Priests and their connection to the Old Gods/Elementals, and from there perhaps an Azshara raid that leads us into a full-fledged confrontation with the Old Gods. I’d prefer to be wrong about Azshara, but I’m not optimistic that she’ll get an entire expansion to herself.

QftQ: I’m finally (finally!) buying the Diablo 3 Reaper of Souls expansion. So! My question is thus: Normal expansion, or Special Edition? Let me know which you think is worthwhile.

I own the Reaper of Souls collector’s edition and it’s pretty sweet. Keep in mind I enjoy it for things like the soundtrack and so on, so if you’re not a big fan of things like that or art books, it comes down to whether or not you care about in game pets and appearances that you’ll get via the collectors edition.

If none of that matters? Just get the regular edition. Plays the same.

Oh, and play a Barbarian. Trust me, it’s so much fun.

Q4tQ; You’re an Old God. What are you whispering?

Okay, that’s the Queue for this Friday. I’ll see y’all next week.

Blizzard Watch is made possible by people like you.
Please consider supporting our Patreon!
Filed Under: Sail
Advertisement