The Queue: White Wine in the Sun 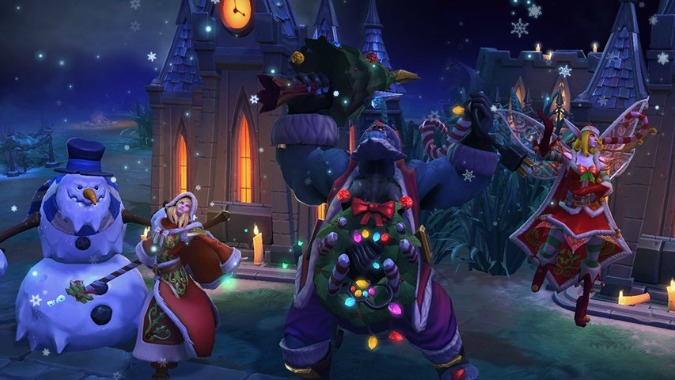 Happy Boxing Day, everyone! Whatever you celebrated this season, I hope you had an enjoyable experience. And if you didn’t, I hope everyone here at Blizzard Watch — readers and writers alike — can help make things better.

Now, onto The Queue!

KALCHEUS POSTED A PICTURE OF A LOWBIE ALT WITH THIS QUESTION:

I’m not exactly making plans, but I kinda wish I were up to doing so. I only level in bursts, and I have to really be in the mood to level before actually doing so. I haven’t leveled many alts during Legion, and I’m still not really feeling it, so 7.3.5 may be something I keep in the back of my mind whenever I do get in the mood to level.

I’ll probably do some leveling whenever Allied Races make their appearance, but even then… I have all but a Druid at max level, and I have no interest in leveling one anytime soon. So who knows. I’m excited for leveling changes, I just don’t have an immediate interest in it.

Is there an easier way to get Argussian Reach reputation than just running WQs (and the emissary quest when it’s up)? Getting ready for the void elves is a pain.

I am simultaneously trying to talk myself into and out of buying a Nintendo Switch tomorrow.
*inner conflict intensifies*

I don’t want to ever suggest an irresponsible use of money, but the Switch is genuinely a great system all around. I don’t think I’ve found anyone who’s regretted purchasing it or who’s left feeling like the games weren’t enjoyable. I mean, it costs a decent bit to get yourself everything needed to play games, but once you have a system, maybe an extra controller, and a couple games (Breath of the Wild, Mario Odyssey, Splatoon 2, etc.), you’ll be happy to bought them. I haven’t loved a system like I love my Switch in a looooong time.

QftQ: have you ever tried out a Clas but after playing it some you move on for whatever reson, then come back and try a different spec with that class and then that class becomes more injoyable?
This happened with the monk, I tried out windwalker but it just wasn’t that fun, then I play it again after as a mistweaver and enjoyed it a lot more.

I usually go into leveling a new class with a specific spec in mind, actually. It’s rare that I pick a class first and then waft back and forth on specs. As a result, I usually don’t experience what you’ve described.

However! My Mage is an exception to this. I don’t think I leveled a Mage beyond 42 before the leveling stream, and even then, it took me several Mages before the class clicked with me. Eventually, I found a spec that worked and got into the groove of things, but I dunno… Mages took me a while to get into.

Q4tQ: Has the possibility of a replay function ever been discussed for WoW? Watching kill-vids is nice, but given a complete combat log, wouldn’t it be possible to make something akin to SC2’s replay functionality?

I’m not entirely familiar with the SC2 replay feature, but if it’s anything like the Heroes one, it can’t play any old matches that were played on a different patch than the current one. In HotS, the replays are done using the ability IDs to recreate the battle… but if the functionality of those abilities has changed in a patch, then the ID for, say, Valeera’s Vanish would tell the replay system to do what Vanish currently does, rather than what it did during the match you’re trying to watch. And that gets super wonky.

Even if that’s not the case, though, WoW doing something like this would use so many of the game’s resource and space on the players’ computers, it wouldn’t be worth it. It’s better to just let those strictly interested in recording things do the recording.


This is my favorite Christmas song.

ZEL, WHY SO MANY QUESTIONS?

Q4tQ: Did you have a good Christmas?

Q4tQ: Mitchmas edition: Blizzard Announced The Firebat in a cute little video with a cosplayer making a snowman. Which is the first live action trailer they’ve done, as far as I remember.What new style should they use for the next hero?

GALDWYNN HAD A QUESTION THAT TURNED INTO A CONVERSATION AND I LITERALLY CAN’T EVEN:

Q4tMitch: Why should I be excited about Firebat joining Heroes?

ValenceMagi: Follow up Q: Should there not be a Old God themed HotS map?

Me: And then the follow-ups got kinda cray cray so I stopped posting them here.

Q4TQ: what if it’s the Lich King who gets things started for the BfA? He seemed to have something in the planning stages during the DK campaign.

Honestly, if Blizzard wants to do the faction conflict thing, I think they should root it in the factions. No outside sources, no corruption, none of that. Don’t get me wrong, I want to see more of the new Lich King because holy crap, his story has a lot of potential, but I don’t want it — nor Old Gods — to be the “real” villain behind the faction conflict in Battle for Azeroth.

Is this a faction-based question? If so, I obviously choose

Be nice to people, and always remember that The Queue is here for you if needed <3