The story of Girrairn, shaman of the Tauren 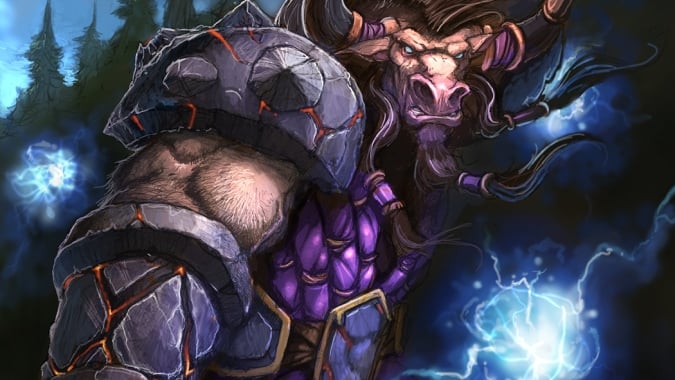 This character profile has been written for Girrairn, one of our supporters. If you enjoy it, you can check out the other profiles we’ve written, too!

Shu’halo honor the elements, as the Earthmother is composed of each working in concert. Shu’halo honor their ancestors and the spirits of all living things, for the world is woven from each united in purpose and disharmony between them is poison for the world. Girrairn learned this lesson at an early age, when he and his people were nomads in the Barrens enduring a slow death from the raids of the Centaur. As a child, his mother named him Girrairn in honor of the lives lost, the Gir’arn Airn’nar whose spirits watched over the people in death. His father had joined their ranks before he was born.

In those days, Girrairn found believing in the unity of the elements difficult, when hunger gnawed at the belly and every day was a fight against enemies who would come and raid your food stores and melt away without standing to fight.

Many of the people raged, and took up the spear to bring death to their enemies. But the Old Bull preached a different path.

“We will fight them if we must. But we will care for one another whenever we can.” It was his vision that the people would one day find a home, a place where they could stop and stand and force the Centaur to stand as well. A place they could not be pushed away from, where they could live and thrive. Cairne talked about the ancestors, and Girrairn listened.

When the Orcs came, and Cairne made common cause with them, Girrairn wasn’t entirely sure of it. His loyalty was to the people, the ancestors, and Cairne. But Cairne said it was worth doing, and slowly Girrairn saw the wisdom of it. As he grew to adulthood, so grew Thunder Bluff, the city in the air. Stone and earth and even fire and water melded together in the Pools of Vision, the elements forming the heart of the new city.

When Cairne died, it seemed as if the world itself groaned. The ancestors, the elements, not even the watchful dead, none had warned of this calamity. The rebellion of the Grimtotem was a stark reminder that evil could lurk even in Grimtotem hearts, and the betrayal of the Elder Crone was like a knife in Girrairn’s breast. If a Shaman could betray the people, what good was the art? How could spirits be brought to unity and elements to concert if the ones charged with this task failed it? But Girrairn chose hope. He watched as his people found new paths, reaching out to the Light of An’she the Sun to illuminate new ways forward, and he chose to do likewise in his own way.

The elements make up all things. Fire brings light, and as An’she is a light in the dark of the stars, so could Girrairn be one here in the world. Girrairn chose to uphold Baine Bloodhoof and keep the Shu’halo focused on moving forward, and when Cairne’s killer Garrosh Hellscream finally overstepped his bounds Girrairn did not hesitate to support the rebellion against him. Many called it the Darkspear Rebellion after Vol’jin and his people, but there were many Shu’halo who fought alongside Baine in that battle, and Girrairn invoked the watchful ancestors in battle, called on the wind to grant fury to his weapons, and fought until the false Warchief was no longer ruler in Orgrimmar.

Some Shaman heal by calling soothing magics to bind wounds. Girrairn heals by removing disorders — striking down that which threatens harmony and breaks unity. Be it from demons or the jealous hearts of mortals unwilling to see the truth, that all things are interconnected and all the world is made up of the elements in concert. The Earthmother’s breast is rock and earth. Within that breast burns the molten fire at the heart of the world. Her dreams are the clouds above us, and her tears fall on us as rain and collect in rivers and oceans. And the ancestors, the watchful dead, came from her and return to her. Girrairn knows all Shu’halo, all people have a role to play, a purpose dear to her heart.

His is to fight for her.

Blizzard Watch is made possible by people like you.
Please consider supporting our Patreon!
Filed Under: Girrairn, Shaman, Supporter Character Profile
Advertisement