The Queue: This is fine 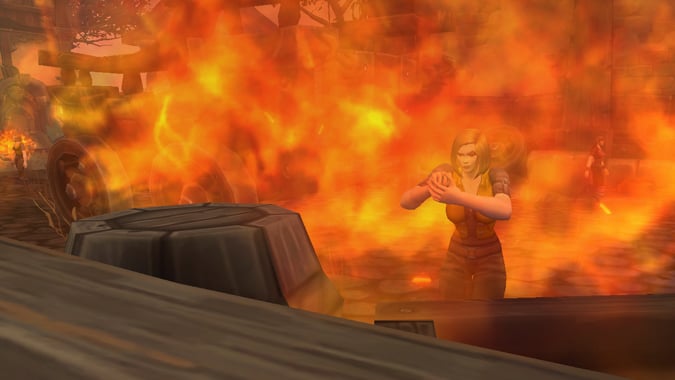 It got down to a whole 8 degrees last night (-13 °C for non-US readers), and it looks like that’s going to be the new normal for a few days. Ordinarily, the sight of an NPC nonchalantly crafting in the middle of a roaring blaze would be a cause for concern, but right now it just looks downright cozy.

Q4tQ: is there any information in the alpha about how to use druid forms unlocked via artifact weapons?

At the moment, no — keep in mind that the only characters we can create on the Alpha right now are premades. As such, they don’t have access to all the things we may have unlocked or gained access to in Legion…like Artifact weapon appearances. I did go make a Druid just to check and see if any of that was enabled, but it doesn’t appear to be available so far. It’s probably not ready to be tested just yet.

How is it that the Void Elves succeeded in warding off the corruption of the Void where titans, apsects, naaru, etc have failed?

Titans and Naaru haven’t tried to ward off the corruption of the Void — it’s just something they avoid entirely (no pun intended, I swear). In the case of the Titans, they weren’t even aware of its existence until Sargeras discovered it. Once they found evidence of it on Azeroth in the form of the Old Gods, the solution was to lock it away. They didn’t exactly get a chance to try much more than that before Sargeras took care of them.

As far as the Naaru are concerned, Xe’ra had absolutely no interest in any dealings with the Void what so ever. She even went so far as to lock Alleria up for trying to mess with it. Other Naaru have mentioned the Void in passing, but it’s less “the Void” and more the darkened state Naaru shift into when they’ve been severely injured. And in those cases, the Naaru are kind of…I don’t want to say blase about the whole thing, but they seem curiously unaffected by the idea of it. It’s just a natural part of the Naaru life cycle to them, according to what D’ore says in Auchindoun.

Void Elves are different — Alleria in particular. She was determined to find out more about the Void. As a counterpart to the Light, it seemed like something that could be useful in fighting the Burning Legion. Until that point, nobody had ever really tried to master it, save Locus-Walker. Nobody had an interest in mastering it, due to preconceived notions surrounding the Void. Those notions were pretty much set in place by Xe’ra, and Alleria shrugged off Xe’ra’s warnings and decided to attempt it. It wasn’t a bad idea, and her reasoning was sound — if the Light wasn’t proving successful in immediately destroying the Legion, then maybe other options needed to be utilized to accomplish that task.

I’m sure this is a tired question/topic but what plans if any does Blizzard have to avoid another WoD situation with presumably 5-7 more months of Legion, with no current known endgame content additions to tide players over?

The Warlords situation was very different in comparison. Patch 6.2 was the last major content patch in Warlords — it pushed out Tanaan Jungle and Hellfire Citadel. It launched on June 23, 2015. The next major patch with substantial content was the Legion pre-patch on July 19, 2016 — a little over a year later. In comparison, Legion’s been pretty good so far about doling out chunks of content. We got Argus on August 29, 2017, and we got access to Antorus on November 28, 2017. We got new quests, Ulduar Timewalking, and level scaling in 7.3.5, and that came out January 16. And we just got Allied Races added as well on January 30. You can get early access to those, as long as you’ve preordered Battle for Azeroth. Yes, there’s a method involved to unlocking them, but it’s not exactly strenuous, it just takes some time. And we’ve got plenty of time between now and when Battle for Azeroth releases…whenever that happens to be.

If Battle for Azeroth releases on September 21 of this year — note that preorders say on or before that date — then that’s still only eight months of waiting, as opposed to the giant stretch of absolutely no significant new content at all in Warlords. And we aren’t done getting Legion content. There’s been stuff datamined that implies what we’ve done so far in Silithus isn’t over yet.

Look, if you’re wanting another raid, it’s doubtful you’re going to get one. I don’t think we’ll see another new dungeon, either — Blizzard is focused on getting Battle for Azeroth ready to go. But that doesn’t mean that there’s nothing to do. Between clearing Antorus on whatever difficulty your heart desires, unlocking and leveling Allied Races, and simply finishing off any Legion content you haven’t gotten around to completing yet — collecting Artifact appearances, knocking out Ahead of the Curve achievements, etc — there’s plenty to do.

Is it a wait? Yes, but there’s always going to be a wait involved. At least with this wait, we’ve got a litany of options to keep us occupied in the meantime. And if none of those options really appeal to you, there’s nothing wrong with taking a break if you feel like it.

I heard there was a new Blingtron 6000. With transmog and repair vendor built in. I probably heard wrong. Those goblin communication lines are pretty unreliable.

I’m not sure which branch of the Goblin communication network you were listening to, but there’s been no news on that front so far. Professions on Alpha don’t appear to be enabled yet — like I mentioned before, we can only make premades at the moment. Unfortunately, the premades don’t have any professions learned. I have yet to see a profession trainer on either new continent — heck, I don’t even see herbs to pick or ore to mine scattered around the world right now. But since you can already get both of those things with the appropriate yak mount, I can’t really see them adding that to Blingtron’s assorted tasks of things to do.

Do you feel the story in the BfA Alpha has the same magnitude of importance that the story in Legion did? Looking for a comparison of OMG Legion threat to “Oh hey, the other factoin”

It’s…hard to say. In general, yes. In the Alpha currently, not so much — there are only two zones unlocked at the moment, and they don’t feel like they’re finished yet. So far, I’ve polished off everything Drustvar has to offer. The story isn’t as immediately dire and world-threatening as what we saw headed into Legion. But it’s really interesting, there’s a lot of lore involved, there are characters you get invested in, and I absolutely won’t mind playing through it a million times with a bunch of different alts. I’m tackling Nazmir later this week, and just based on the scenery I ran across taking screenshots, it’s going to be much the same.

So far, the faction battle hasn’t really been a thing — at least not on Drustvar. There was one very brief side quest that popped up involving taking care of some Horde invaders, but it was a momentary diversion from the major storyline, if anything. Kul Tiras has its own problems. I think we’re in a case of “help these guys out, then worry about the faction thing” as far as leveling is concerned.

In general, Battle for Azeroth has the potential to be every bit as important as Legion. I mean, our world is in serious trouble. Way back when Azeroth’s history all began, Aman’thul tried to rip an Old God from the world, and ended up tearing a wound in it. It took some serious work to staunch that wound and stabilize it. We don’t have Titans and Keepers to do that job for us anymore — it’s up to us to fix the damage. If we fail, our world dies, and we cease to be. All this back and forth between the factions pales in comparison to that. That may not be the part they emphasized when announcing the expansion at BlizzCon, but what they gave us at BlizzCon was just the smallest slice of Battle’s story. I think we’re going to see a lot of story progression at endgame, just like we did in Legion — and I don’t think the finale is going to be as simple as the Alliance and Horde punching the heck out of each other.

Not going to happen. The days of monarchs and dynasties in Silvermoon are over — the crown of Quel’Thelas remains unclaimed, and will always be unclaimed. When King Anasterian died, Prince Kael’thas decreed that Anasterian would be the last King. Even if he had returned to Silvermoon unscathed, he didn’t have any intention of being King Kael’thas. Everyone pretty much agreed with that sentiment — regardless of his son’s later actions, Anasterian was a beloved ruler, and his death dealt a huge blow to the hearts of Quel’Thalas. That aside, Lor’themar has no interest in being a monarch — Regent Lord is more than enough.

As far as Liadrin goes, she has no claim to the crown, no relation to the Sunstrider line at all, and I don’t really see her as wanting that kind of responsibility. She’s happy enough leading the Blood Knights and advising Lor’themar where needed. They have a good relationship — they’ve known each other for a long time. He listens to her and respects her opinion — heck, he was happy to entertain the Nightborne and form an alliance at her suggestion. If anything, I see her more in that ambassador kind of role. Since the renewal of the Sunwell, she’s rekindled a positive connection with the Light, and she’s been far more compassionate and diplomatic than not.