The story of Eleftherios, Archmage of the Alliance 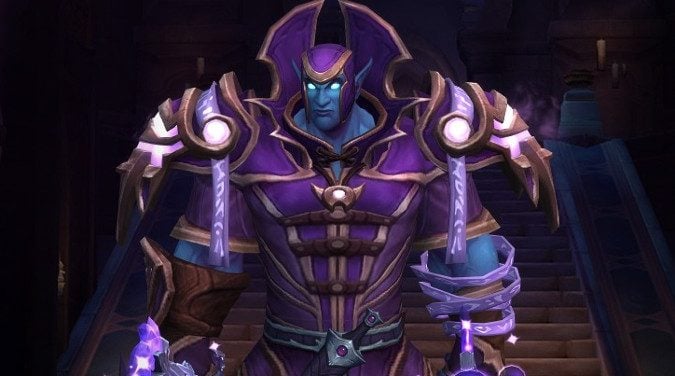 This character profile has been written for Eleftherios, one of our supporters. If you enjoy it, you can check out the other profiles we’ve written, too!

“What use is knowledge?”

Eleftherios thought it an odd question. He was a new student at the Conservatory, though, and Archimonde was the unchallenged master of the Augari — the Wakeners, the Scholars, and the Consulate all reported to him, and the Conservatory was his demesne. So instead of speaking, he stopped and thought. The other students seemed equally nonplussed, until eventually one raised her head. Archimonde gestured to her.

“Knowledge is its own end?”

“I see you’ve been listening to Velen.” Archimonde chuckled and so did many of the students. This bothered Eleftherios entirely because he often did listen to Velen. “But knowledge is merely a means to an end. Learning done solely for itself is ultimately circular — we learn more, but there is always more to know, more to learn. You’ll never understand the whole of creation, so your efforts will be like walking on a wheel, taking you back to where you started. No. Knowledge is not its own end. Knowledge is a means.” He held up his hand and raw arcane force thrummed around it, blazing into existence. “This is the end. Knowledge of the arcane grants you power over existence, and power, guided by wisdom and gained through knowledge, must be used.”

Eleftherios felt a cold hand on his spine watching his peers nod.

Later, after the lecture ended and he had free time, he found himself walking the tranquil gardens of the Seat of the Triumvirate, musing about what he’d heard. Power must be used. It bothered him, the surety of it, the way his fellows had simply absorbed what the Triumvir had said. But Archimonde was one of the greatest of their people. Clearly he knew better than Eleftherios did — he was the head of the Conservatory, the master of the Augari.

He nearly walked into the man before he realized he was standing in a secluded part of the gardens. A tall, bearded Eredar was standing deep in thought, staring at nothing.

“You were walking. You have every right to do so.” Velen looked over his shoulder at the young mage. “You were not at Kil’Jaeden’s pronouncement?”

“In truth, no, although I think of little else.” Eleftherios’ voice was strained by the feeling of the Triumvir’s attention. All three of the Triumvirate were intimidating in their own way, but Velen had a quiet presence that could reassure or threaten as it chose. It was like talking to a mountain. “To not be alone in the cosmos…”

“Yes.” Velen nodded. “To know that others share existence with us.”

They stood there for a moment, each dwelling on their own thoughts. Finally Eleftherios turned to one of the three most powerful beings on Argus.

“No.” Velen turned to look him in the eyes and Eleftherios saw an almost unfathomably kind understanding in those eyes. “We are not doomed, but Argus is.”

Eleftherios did not. And for twenty five thousand years (although with travel through the Nether on Dimension-broaching vessels, time often warps) he has followed the Prophet from world to world, seeking the survival of his people and the defeat of the Legion. He’s lost the name of his people — when Eleftherios was young being Eredar wasn’t yet an obscenity and the world man’ari was a rare thing, not something nearly all Eredar were. Draenei was a word he’d never used. Now it’s the world he occupies, the name and state of his life. He is an exile.

When the Draenei found Exile’s Refuge, the world they called Draenor, Eleftherios was there. When his people were hounded and slaughtered by the Orcs, Eleftherios fought to defend them. When they escaped on the Exodar, he struggled to learn a new world and understand his role in it, helped make new allies and confronted old enemies and those that stood with them.

Yet he never abandoned his studies. Archimonde claimed that knowledge was merely a road to power, and Eleftherios certainly has found power in his knowledge — he has mastered the Arcane to the point where even the inhabitants of the strange new world he finds himself on call him Archmage. But Eleftherios did not succumb to that mentality. He did not choose the path of power for power’s sake. He does not use his power because he feels it must be used.

Eleftherios ultimately chose the path another student laid out long before: Knowledge is its own end. Archimonde was right when he said there would be no end to it, that you could always learn more, that all the pursuit of knowledge could do was reveal how much more there was to know.

But that was the point and the satisfaction of it. You’ll never learn everything. The Legion believes it knows all it needs to. Eleftherios knows he’ll never know all he needs to. And knowing that, he knows to use his power to oppose them.