The Lost Vikings find the free Heroes of the Storm rotation 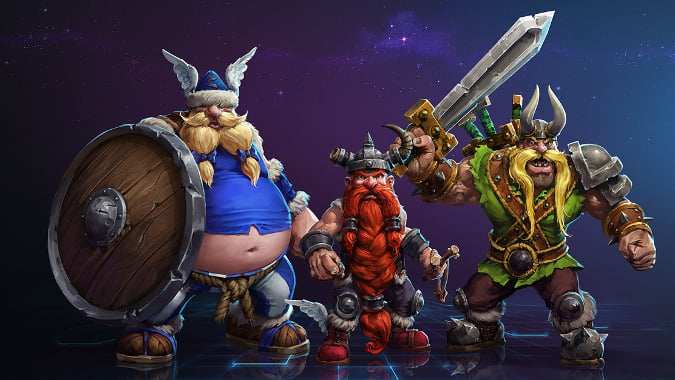 Last week in the Nexus was a quiet one, but this week made up for it in spades. Though we don’t yet have a new hero teaser, yesterday we received just about everything else our hearts could desire. The latest in development video previewed new skins for Greymane, Johanna, and Morales with a space cop motif. Heroes of the Storm also released its latest PTR patch notes which include reworks for Medivh and Sonya.

Remaining firmly in the present, though, this week’s hero rotation is an interesting one for one big reason: The Lost Vikings. If you’ve never played the Lost Vikings before, now is your chance. Be warned, however, they can be quite difficult to play — and have been largely unchanged since they were first added to the game. That means, in addition to their difficulty, they’re starting to show their rust in terms of talent choices and general game mechanics. If you can play them well, though, they can give a team an enormous lead in XP.

If you’re going to give them a shot, do so wisely. Try not to play against characters like Li Ming who can get resets from killing your Vikings. She can pick off the squishier Vikings such as Erik and turn that into a real firework show.

Blizzard Watch is made possible by people like you.
Please consider supporting our Patreon!
Filed Under: Free Hero Rotation, Free Rotation
Advertisement