The story of Dakh, Paladin of the Alliance 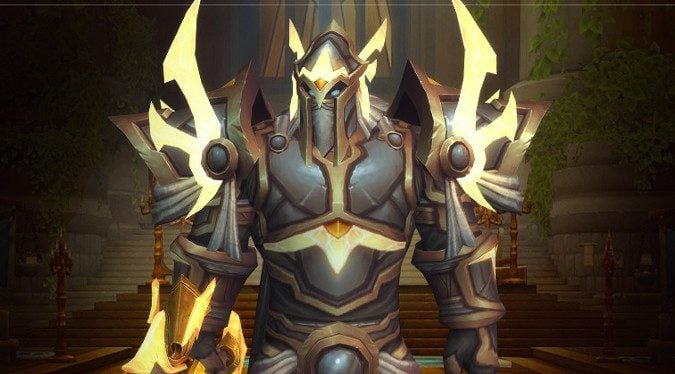 This character profile has been written for Dakh, one of our supporters. If you enjoy it, you can check out the other profiles we’ve written, too!

“You are the worst doctor I ever saw.”

“I told you.” The big Draenei voice was exceedingly deep. It rumbled out of his chest and filled the space between him and the injured soldier on the ground. “I am not a doctor. My name is Dakh, it’s not a title.”

“But you healed my…”

“Calling upon the Holy Light to heal wounds does not mean I know anything about anatomy.” The arrows kept raining down on them, and Dakh made sure to hold his gleaming shield out to intercept a few that would perforate the barely trained farmhand that Stormwind had seen fit to stuff into a uniform and send off to fight. Demons gibbered and yowled down the hill. “All I can do for you is stop the bleeding. Please pick up your spear and run back to your fellows.”

“Run back… what are you going to do?”

“Clean up Azsune.” He gave the boy who held the lance like a pitchfork his best smile. Saw the throat work as his ‘patient’ swallowed. “One demon at a time.” He stood and ran through the big hole in the wall and down the hill, leaving the dubious safety of the Elven ruin and hurling his shield in a blaze of light and power, where it slammed home in a Wrathguard’s chest.

Stunned, the large demon didn’t have time to respond before Dakh’s blade took it right where the shield had impacted and it dropped at his feet. He trod over it to bring the fight to the imps, moves repeated from a lifetime of dealing with their kind.

From childhood Dakh had been one of a few, Draenei born on the ship. The Genedar had been his home and his sanctuary, and Dakh had grown up the beloved child of the entire community, adopted nephew to countless aunts and uncles. When the ship crashed on Draenor, he lost his parents. He honored them, but never really felt orphaned — between his many caretakers and his own strong sense of responsibility, Dakh simply pitched in and did what he could to make Draenor a home, a true exile’s refuge. If he had few close friends, he had many to safeguard, many to protect. He took up the sword and shield of a Vindicator and learned to call the Holy Light while not quite an adult by his people’s standards. For years he thought Draenor would be home forever.

He parried several fireballs from the imps and saw plumes of Fel erupt as green and black streaks fell from the sky — Infernals. Three of them. He shook his head while reaching out, calling the Light as he’d done since the fall of Shattrath. Then it has been in retreat. He’d volunteered to stand and fight, but he was needed to safeguard those that couldn’t protect themselves. Just like now.

By the time the Infernals pulled themselves from the ground, the Imps were all dead. Dakh took a moment to breathe, banged his sword and shield together. Let them come to you, old Kantris had taught him, hours spent locking blades and slamming shield against shield. Kantris had lacked the Light, but he had a firm grasp of blade and shield. Always let them commit themselves, and then make them pay for it. The Light is your weapon, not these. These are tools. Use them as such.

Seeing them climb the hill to meet him reminded him of so many desperate stands. The retreat to the swamp in Zangarmarsh. The seizure of the Exodar. The awakening on Azuremyst Isle and the fight to claim a home on Azeroth. Walking the world he found himself on, and finding that the peoples of Azeroth weren’t so different — even here, there were those who were strong enough to defend the weak, but they didn’t always do it. They needed examples. They needed reminders.

In a way, Dakh felt like the coincidence of his name and their title for a healer — a ‘doctor’ as the humans of the Alliance put it — was an omen. Azeroth needed to be healed. And he had the scalpel in his hand. He could best heal the world by stepping in front of those who couldn’t and making those that abused their power pay for it.

The first Infernal lumbered up to him and swung its massive rock fists. He blocked with the gleaming shield, felt the impact rock back up into his arm and let it push him back, then lashed out with the blade. The attack did what Dakh meant it to do, it moved the Infernal to block the next one. Smiling, he called on the Light, imagining it crackling from under his feet and it did. The soil and rock of the hillside groaned as the fury of pure radiance shattered everything in a circle around him, searing the demons before him.

They were not ready for him to throw his mass forward, smash into the closest Infernal and send it toppling backwards into the second. They fell prone in the blazing holy power radiating from the ground and it took them, burned them to ash.

The third was clever enough to wait and not march into the Light. Dakh smiled and pointed a hand at it. The Light smashed down like a hammer as it judged the creature. An old familiar gesture. Up the hill, the soldiers were firing arrows at it now, chipping away at the creature, and it turned to bellow.

Dakh took the advantage offered him and swept out with the shield, crashing it into the creature’s chest and exposing its leg. The blade sheared it off and the Infernal fell at his feet, and from there it was a simple matter to remove the head and smash open the rock body. He wiped a hand across his forehead, sweating from the effort, the heat of his armor in the warmth of Azsune’s seemingly permanent summer, and of course the rancid Fel flames of the dead Infernal. So much like lost Draenor. He’d lost his refuge, but he still knew his path.

“Lothar’s dotted pate.” One of the soldiers, an older man with a grey and black beard, had come down with a water skin. Dakh took it, drank gratefully. “You just…”

“Well, without you I doubt we’d have made it.” The solider looked Dakh over critically. “Say, Private Antin said you’re a doctor?”