The Queue: That’s no Gnome… 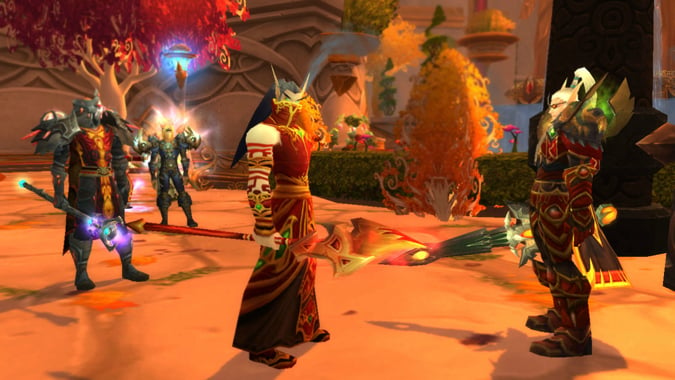 I know I use Gnomes in my header images a lot. Gnomes are adorable and it’s really just hard to go wrong with a Gnome picture. But I also have a soft spot for Blood Elves, so today you can enjoy this image of Lor’themar and Rommath.

Why would the Blood Elves (particularly their Paladins) stay with the Horde after Sylvanas’ actions at the battle for Undercity?

I admit that I am not as up on lore as some of our writers, but I personally find the position of Lor’themar and the Blood Elves to be an interesting one. They were a desperate people when they turned to the Horde. The Third War decimated Quel’Thalas. The land was in ruins, the Sunwell was destroyed, and the now-Blood Elves were left with an addiction to magic with no way to satiate it. By the time of Burning Crusade, Prince Kael’thas had traveled to Outland, allying himself with Illidan and, later, the Burning Legion. Perhaps it began as a way to find help for his people, but by the end there’s no question that Kael’thas had gone quite, quite mad.

The Blood Elves were a leaderless nation in tatters, with Lor’themar acting as Reagent Lord. And in desperate need of aid, he turned to the only ones who would give it: the Horde. Thus, Kael’thas was defeated and Quel’Thalas still stands.

And the Blood Elves are stuck in an uneasy alliance with the Horde. Sylvanas, in particular, seems to view them as tools more than allies, bullying them into doing as she wishes because she knows Quel’Thalas cannot stand on its own. There’s a short story about Lor’themar that was posted on the Blizzard website which is worth reading in full if you want a picture of just what the Blood Elves have gotten into. There’s a encounter between Lor’themar, Grand Magister Rommath, and Sylvanas that happens when Sylvanas comes to demand the Blood Elves join the Forsaken in Northrend. I think it’s quite telling of the Blood Elves’ situation.

“Send my exhausted people to find more death in Northrend, or risk losing Quel’Thalas to the Scourge once again.” From far away he heard his own laugh, and it sounded more like one of Rommath’s. “There is no choice here, Sylvanas.”

The Banshee Queen eyed him dispassionately.

“I will expect your forces at the Undercity in two weeks, Lor’themar,” she replied. “I will not be disappointed in this.”

“How can you do this?” Lor’themar registered the desperate anger in Rommath’s voice with a sort of dull surprise; the grand magister seemed still to believe somewhere that Sylvanas could be made to negotiate.

“This is blackmail!” Rommath continued, the knuckles of his fists paling as he clenched them around his staff. “It was you who pleaded to aid us in the first place! We never asked for your assistance; you gave it of your own free will! How can you call yourselves our allies in one breath and hold our lands for ransom in the next?”

Sylvanas considered him a moment, somehow managing to look down upon him though he was taller than she.

“You were never required to accept my offers,” she said. “You chose to. All I ask for now is the will and power to defeat our greatest foe.”

By the end of Burning Crusade, when this story takes place, the Sunwell had been restored, but the situation in Quel’Thalas was far from stable. The Blood Elves needed help, and Sylvanas was willing to provide it… for a price.

And while the situation may have changed since then, we haven’t seen evidence that Quel’Thalas is any more secure in the game. The Blood Elves need allies, and so far, the Horde is the only game in town.

Sylvanas is hardly kind to the Blood Elves in Battle for Azeroth, but I don’t think she’s ever been kind to them. The Blood Elves are members of the Horde not because of some philosophical agreement, but because they had no other choice. As it stands, they still seem to have no other choice. They can remain within the dubious safety of the Horde, or attempt to fend for themselves.

I think this is a very interesting storyline that’s really been abandoned since Wrath. (In fact, this pre-Wrath short story may be the last of it.) I’d like to know where the Blood Elves stand now that they’ve had time to rebuild… and especially with the Alliance set to retake Lordaeron, leaving Silvermoon isolated from even its unreliable Forsaken allies. Isolated like that, they may need help more than ever before… or they may find themselves able to break their ties.

We’ll see what happens. But in the meanwhile, I quite understand why Lor’themar would be sticking around.

if Malfurion is the worst, what would Mei-furion be? worse? better? a-MEI-zing?

Second, obviously Mei-furion would be better, because, as you have pointed out, you can’t get worse than Malfurion. That’s just science.

Q4TQ: I’m currently obsessed with the musical Hamilton. If there was a Warcraft version, which characters/stories would not throw away their shot?

This is a tough question, because Azeroth is brimming with heroes who will fight at any cost (and hotheads who won’t back down). Look at Varian, standing down demons on the Broken Shore and knowing he’ll lose but fighting anyway. Look at Illidan, whose people have turned him away but always come back to him when they need to fight the Burning Legion. (“I’ve traded my freedom for power before,” he says, only willing to take things on his own terms.) Look at Anduin, particularly in Mists, where he ran away from everything familiar to find his own path, answers beyond another war (though war is still where he’s arrived). Look at Maiev and her endless hunt for Illidan, which she wouldn’t give up regardless of the cost.

Honestly, this would be a shorter question if we talked about who would throw away their shot. Millhouse Manastorm, maybe? I’m just not sure.

P.s. This is totally not 700 words, Mitch, I have no idea what you are talking about.

Is there a way to help Blizzard Watch without paying a monthly fee? Maybe a one time thing? I know you put shirts out every year, but I’ve never used pateron and only really use amazon to buy stuff online so as a newb to this stuff are there other things I can buy or just donate a small amount if a monthly fee is out of the question?

We’re honestly happy for any support, including moral support. As was mentioned in the comment, sharing our stuff with friends is always appreciated. More eyes on the site helps us out.

You can also support us by buying things on Amazon, like Chronicle Volume 3. If you click on one of our Amazon links, anything you buy from the site —  whether it’s what we linked or not —  gives us a little kickback. (Or, to do it more manually, add “?tag=blizwatc-20” to the end of any product URL on Amazon.) We also have some other little affiliate deals, like the science streaming service CuriosityStream or the audiobook site Audible. If you subscribe to one of these using our links, again, we get a little something for it — and it doesn’t cost you a dime. I actually just talked to Alex about compiling all of these links into one easy-to-find place so anyone who wants to chip in knows how. Look for that Soon(tm).

Then, of course, there’s supporting us by just giving us cash. As you mentioned, you can subscribe on Patreon but you don’t need to subscribe forever. You can chip in some cash one month and then unsubscribe. You can also subscribe or make one-time donations via PayPal. (And a note for those of you interested in the $25 character profile benefit, if you subscribe at that level for even one month, we’ll get you a profile. It won’t be immediately, because we have a backlog, but you’ll get one.)

And that’s all for today, my lovelies. Anne will be here tomorrow for more questions and more answers… and if you want to ask about Blood Elves again, she may have a more informed take on it.

Until next week, good night and good luck.